Here's NASA's Plan for a Lunar "Base Camp"

"These missions will be by far the longest duration human deep-space missions in history." 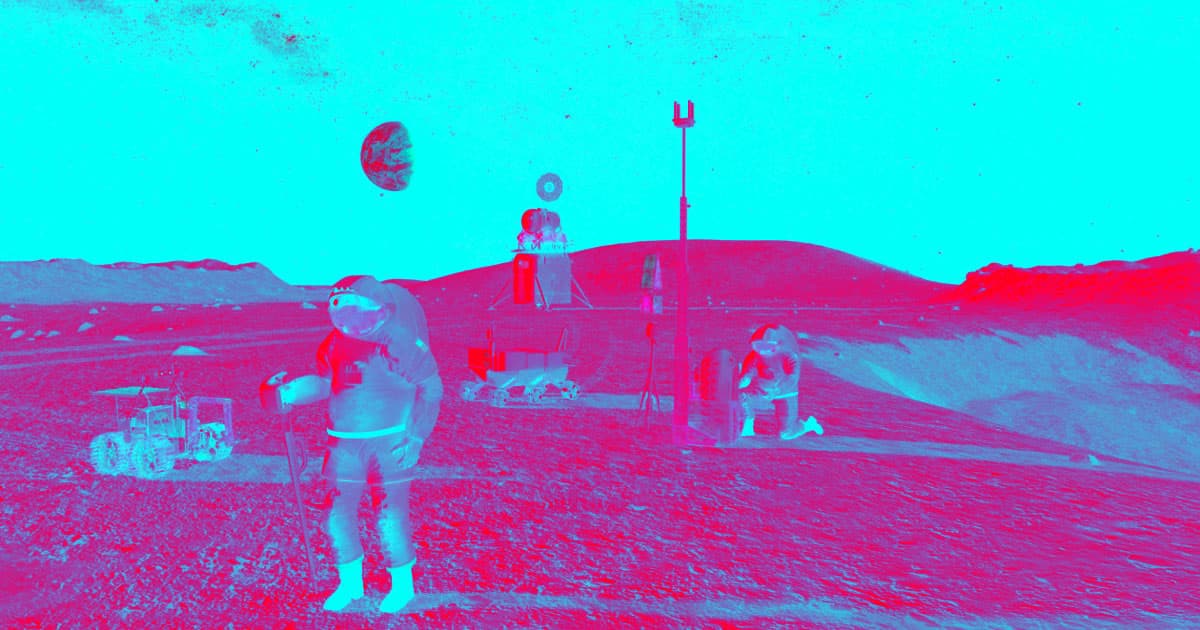 NASA has outlined its plans for a lunar station called the Artemis Base Camp in a new 13-page report titled "NASA's Plan for Sustained Lunar Exploration and Development," submitted to the National Space Council last week.

"After 20 years of continuously living in low-Earth orbit, we're now ready for the next great challenge of space exploration — the development of a sustained presence on and around the moon," NASA administrator Jim Bridenstine said in a statement.

The plans are part of NASA's greater ambitions to return man — and send the first woman —  to the Moon as early as the 2024 Artemis mission.

On the lunar surface, NASA envisions the Artemis Base Camp including a lunar terrain vehicle that can scan the surrounding areas for oxygen and water, a habitable mobility platform for 45-day Moon trips, and a "lunar foundation surface habitat" that can house four crew members for short durations.

According to the report, the base, to be built near the Moon's South Pole, will need "supporting infrastructure added over time such as communications, power, radiation shielding, a landing pad, waste disposal, and storage planning."

It could also serve as a place to figure out a way to deal with lunar dust — a potentially dangerous element of spending time on the Moon.

To establish Base Camp, NASA is still planning on constructing the Gateway, a scaled down space station that will orbit the Moon and house astronauts as they make their way to the surface — or eventually to Mars.

"Gateway can also support our first Mars mission analogs on the lunar surface," the report reads. "For such a mission, we currently envision a four-person crew traveling to the Gateway and living aboard the outpost for a multi-month stay to simulate the outbound trip to Mars, followed by two crew travelling down to and exploring the lunar surface with the habitable mobility platform, while the remaining two crew stay aboard."

Such a mission would be "by far the longest duration human deep space missions in history," the report notes.

The report comes hot on the heels of SpaceX signing a contract with NASA last week to supply the Gateway with cargo using a modified version of its Dragon cargo spacecraft.

"For years to come, Artemis will serve as our North Star as we continue to work toward even greater exploration of the moon, where we will demonstrate key elements needed for the first human mission to Mars," Bridenstine said in the statement.

READ MORE: NASA unveils plan for Artemis 'base camp' on the moon beyond 2024 [Space.com]

More on Artemis: NASA’s Own Report Admits Its Non-SpaceX Rocket Is a Disaster

Read This Next
Carbon-Based
NASA Rover Finds New Potential Evidence for Ancient Life on Mars
So Long
Tragedy! NASA Says the Voyager Space Probes are Powering Down
Expect Delays
Scathing Report Admits NASA Is Years Behind Moon Landing Schedule
Uh Oh
Something Very Bad Might Be About to Go Down at NASA
Astronaut Drip
We Just Got the First Peek at NASA's Artemis Moon Landing Suits
More on Off World
TMNT
Yesterday on the byte
Chunky Turtle Spotted Near NASA's Mega Moon Rocket
Cloud Spotting
Thursday on the byte
NASA Needs Your Help Spotting Clouds On Mars
Rolling Coal
Wednesday on futurism
Space Travel Will Absolutely Gut the Environment, Scientists Warn
READ MORE STORIES ABOUT / Off World
Keep up.
Subscribe to our daily newsletter to keep in touch with the subjects shaping our future.
+Social+Newsletter
TopicsAbout UsContact Us
Copyright ©, Camden Media Inc All Rights Reserved. See our User Agreement, Privacy Policy and Data Use Policy. The material on this site may not be reproduced, distributed, transmitted, cached or otherwise used, except with prior written permission of Futurism. Fonts by Typekit and Monotype.