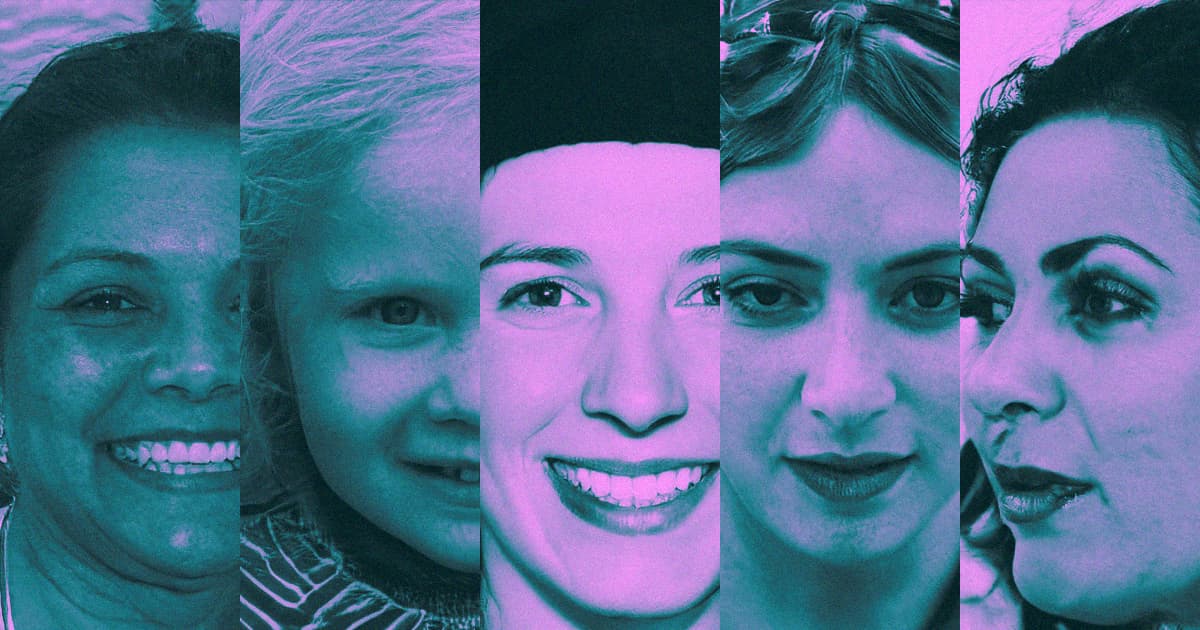 When a mysterious Reddit post pointed me to ThisPersonDoesNotExist.com, I expected to find a blog about a person's quest to get off the grid — perhaps like Kashmir Hill's weekly attempt to cut a tech corporation out of her life for Gizmodo.

Instead, I saw this:

"Oh," I said out loud. I refreshed the page and the woman was gone, replaced by an equally uncanny, AI-generated image of a person — and absolutely zero explanation. (If you're having a hard time spotting the errors, look at her teeth.)

A person who says they created the site popped up on Hacker News to explain what was going on. The website cycles through the results of a type of algorithm called a Generative Adversarial Network (GAN), which basically means that two AI systems duel each other to create a realistic imitation of something — whether it's a caricature, a level of DOOM, or a person's portrait.

In this case, the GAN was built by Intel researchers and trained on photos of people's faces, according to research published to the preprint server ArXiv last week that the author shared in the Hacker News post. However, the same algorithm has also been trained on images of anime faces and paintings, resulting in terrifying animations.

The results are far from perfect — one AI-generated woman's face was covered in red, worm-like streaks.

A man had what seemed to be a black hole swirling around in his neck. And then there's this one below, where a woman's hat seems to exert such a powerful gravitational force that it ripped a hole in the background. But aside from the occasional body horror errors, they look pretty good.

Try it Out: This Person Does Not Exist

More on GANs: Here’s What AI Thinks A Bunch of Famous People Look Like

Read This Next
Shooting Feet
After Saying He Wanted an Open Algorithm, Elon Musk Just Fired the Twitter Team Responsible for Doing Just That
Leader Lars
New European Political Party Is Led by an Artificial Intelligence
Common Sensical
Top Facebook Scientist Quietly Plotting "Autonomous" AIs
White Voice
Cursed Startup Using AI to Remove Call Center Workers' Accents
Death Becomes Her
AI Allows Dead Woman to Talk to People Who Showed Up at Her Funeral
More on Artificial Intelligence
History Selfie Ch...
Yesterday on the byte
New AI Shows What You'd Look Like in Different Eras
I'm a Cool Boss(w...
Nov 23 on the byte
Companies Already Investing in Tech to Scan Employees’ Brains
Language Moron
Nov 20 on the byte
Facebook Takes Down AI That Churns Out Fake Academic Papers After Widespread Criticism
READ MORE STORIES ABOUT / Artificial Intelligence
Keep up.
Subscribe to our daily newsletter to keep in touch with the subjects shaping our future.
+Social+Newsletter
TopicsAbout UsContact Us
Copyright ©, Camden Media Inc All Rights Reserved. See our User Agreement, Privacy Policy and Data Use Policy. The material on this site may not be reproduced, distributed, transmitted, cached or otherwise used, except with prior written permission of Futurism. Articles may contain affiliate links which enable us to share in the revenue of any purchases made.
Fonts by Typekit and Monotype.