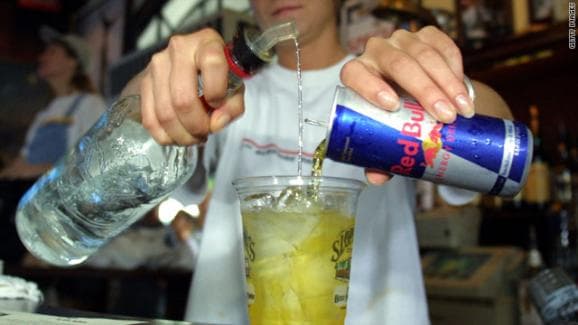 If you've been to the bar recently, you've probably noticed that it has become very popular to mix alcohol with caffeine. This has raised a number of concerns, which came to a bit of a head on November 17, 2010 when the U.S. FDA (the Food and Drug Administration) issued a warning letter to several manufacturers that combined caffeine and alcohol in their drinks.

The FDA stated that the caffeine added to the alcoholic beverages is an “unsafe food additive” and  that further action, including seizure of their products, may occur under federal law if changes were not made to the products. As a result, a number of companies changed the contents of their drinks. However, this does not stop bars from mixing alcohol with caffeine.

But what are the real dangers? Are there any?

Well, as it turns out, these drinks are kind of a match made in hell. Although it might seem like a good way to stay awake and party the night away, science shows that it is rather dangerous. A 2012 study found that people who mix caffeine and alcohol have a higher risk of heart problems. Among other things, they are 600% more likely to have heart palpitations.

Now, that certainly doesn't mean that you can never order a Red Bull and Vodka. However, as is always the case, be mindful of what you put in your body. And be informed. If you are looking for a place to start your research, the CDC has a helpful factsheet. Here is the page on the topic from the FDA. And here is a really good interview from Scientific American.

Learn more in the video below: