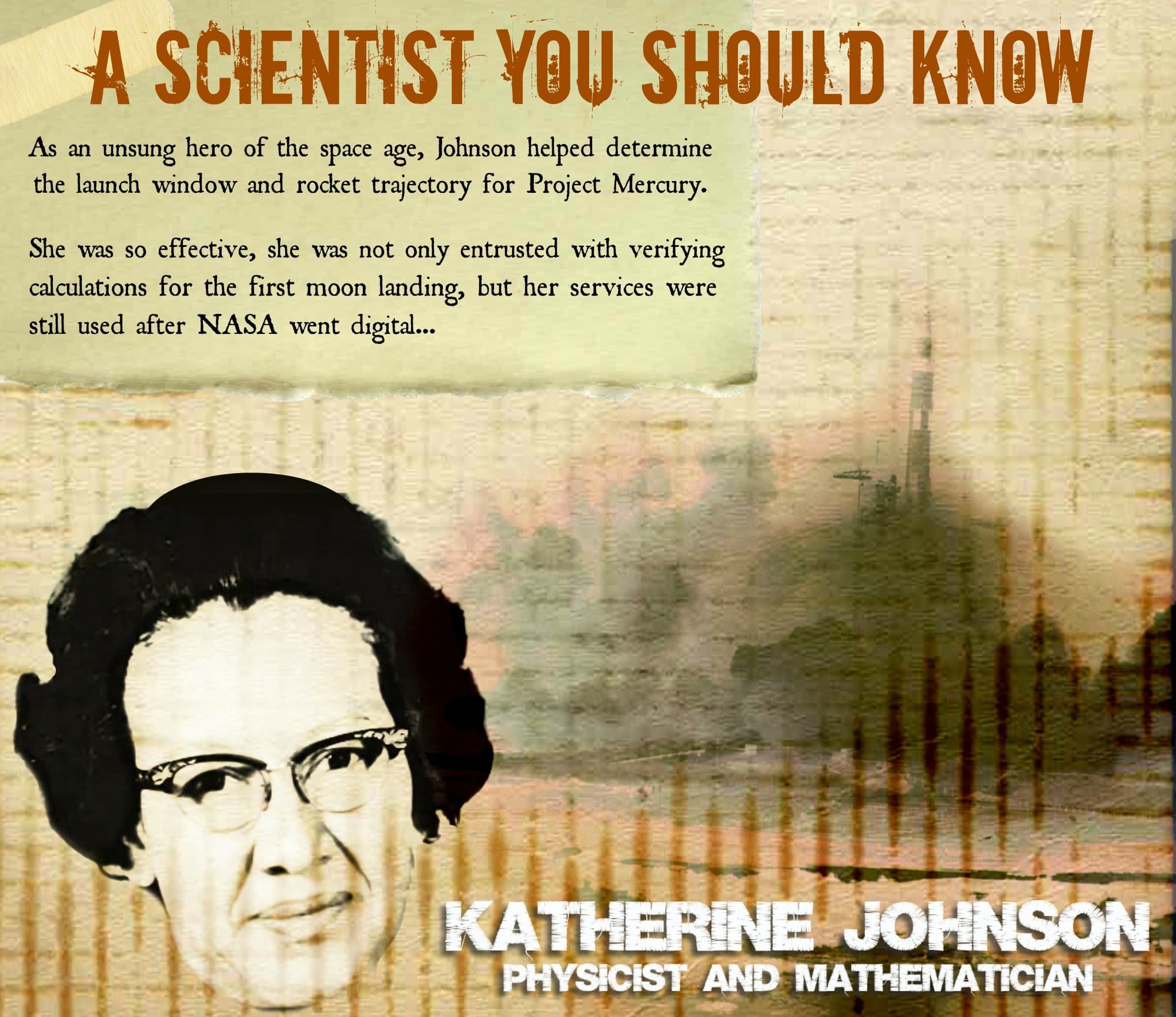 At a time of rampant racism, and a time when women were excluded from many jobs,Katherine Johnston, an African-American physicist, was laying the foundation for the Space Age. According to NASA, "she was a computer when computers wore skirts."

One day, at a family function in the 1950s, a relative mentioned to Johnson that the National Advisory Committee for Aeronautics, the predecessor to NASA, was hiring. They were specifically looking for African-American females to work as “computers” in what was then their Guidance and Navigation Department. In the 1950s, pools of women at NACA did calculations that the engineers needed worked or verified.

Johnson immediately applied for the job, but the agency already had filled its quota for the year. By the time the next year rolled around, Johnson had applied again and found herself with two contracts on her table. One was a contract to teach, and one was to work for NACA. Remembering what professor Claytor had always told her about becoming a research mathematician, she took the job at NACA.

None of the other women had ever asked questions before, but by asking questions, Johnson began to stand out. She was told that women didn’t participate in the briefings or attend meetings; she asked if there were a law against it. The answer, of course, was no, and so Johnson began to attend briefings. NACA was just beginning its work on space.

Space itself may be perceived as a series of plane surfaces, and as Johnson became known for her training in geometry, she began to work with the team more and more. Eventually, she became known as a leader, and the men increasingly relied on her. She remembers quite clearly her experience at the time. “The women did what they were told to do,” she explained. “They didn’t ask questions or take the task any further. I asked questions; I wanted to know why. They got used to me asking questions and being the only woman there.” It was this inquisitive nature that made her a valuable resource to the team and the only woman at the time to ever be pulled from the computing pool to work on other programs.

Then in 1962, President John F. Kennedy charged the country to send a man to the moon. Johnson became part of the team, and she began to work on calculating the trajectory for America’s first space trip with Alan Shepherd’s 1961 mission, an early step toward a moon landing. She went on to do the calculations for the first actual moon landing in 1969.

Johnson worked at the agency until 1986, when she retired after 33 years of service. During her tenure at NASA, Johnson received many prestigious awards. Among them were the NASA Lunar Orbiter Award and three NASA Special Achievement Awards. She was named Mathematician of the Year in 1997 by the National Technical Association. In addition to these NASA awards, Johnson has been honored with an honorary Doctor of Law degree from the State University of New York and honorary Doctor of Science degrees from Capitol College in Maryland and Old Dominion University in Virginia.

At the degree ceremony in New York, Johnson discovered at the last minute that not only was she an honoree, but she was also the keynote speaker. With her esteemed career to draw upon, Johnson rose to the occasion and spoke with the audience. She referred to it as a “chat” with the graduates. A 45-year-old relative of a graduate told Johnson after the ceremony that, because of her “chat,” she was returning to school the following fall to complete her degree.