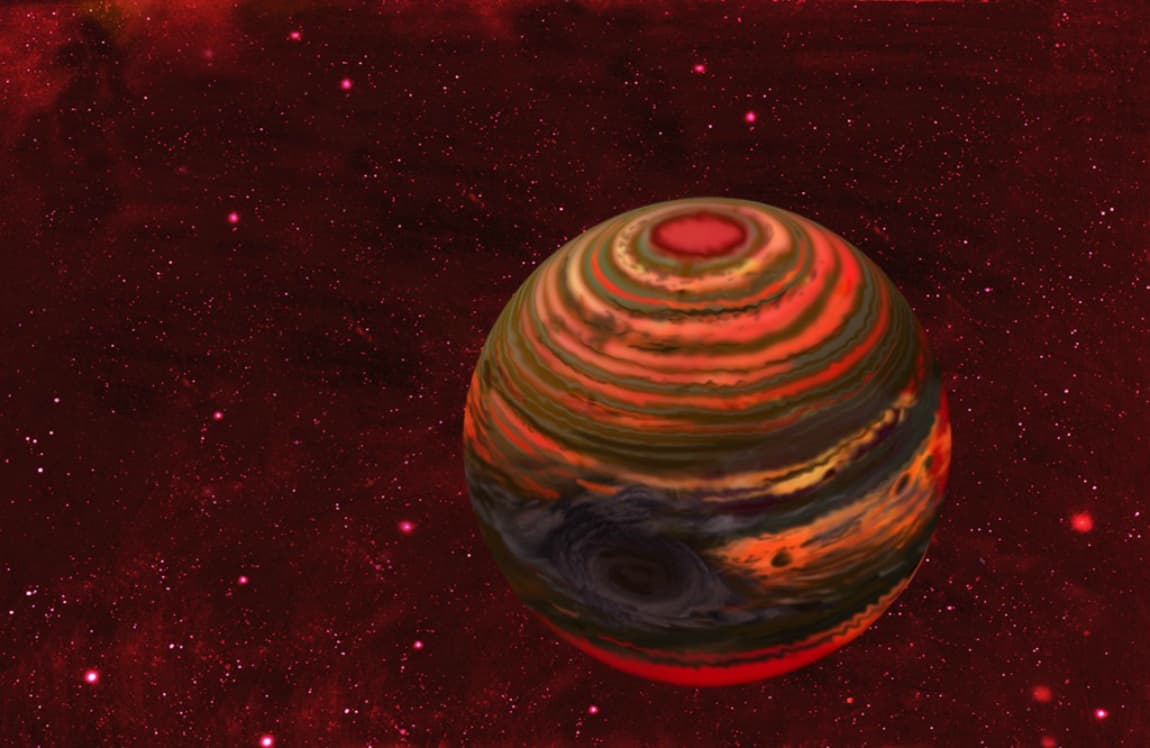 Astronomers have found that a planet, formerly believed to be unattached and free-floating, is actually in a very distant orbit around another star. Ultimately, this makes the system the largest solar system ever discovered.

The object, called 2MASS J2126-8140, was previously identified as a member of the Tucana Horologium Association, a small cluster of stars and substellar objects about 140 million years old.  Based on its youth and low mass, 2MASS J2126-8140 was classified as one of a very rare group of objects known as “free-floating planets,” which presumably formed about a star in the customary fashion, but were subsequently ejected through gravitational interactions within its parent system, or through the influence of nearby stars in the natal cluster.

But the team of astronomers involved in the new discovery reexamined the data, and learned that 2MASS J2126-8140 seemed to be moving through space in association with a small red dwarf star, TYC 9486-927-1, and that both objects were about 104 light years from the Earth.

It turned out that star and planet were simply so distant from one another that astronomers had failed to associate the two.  And no wonder. 2MASS J2126-8140 orbits at a spectacular 6900 Astronomical Units from its primary, or 6900 times the distance of the Earth from the Sun.

That’s over 1 trillion kilometers (621 billion miles), by far the largest orbital radius of any planet so far discovered. Indeed, Its orbit is ultimately 140 times wider than Pluto's.

At that distance, the red dwarf TYC 9486-927-1 would seem to be but another star in the night sky, and hardly even the brightest; and 2MASS J2126-8140 would complete a single revolution in about a million years.

In fact, the star and its planet are so loosely bound that it’s hard to imagine the two remaining together for much longer.  The slightest tug from a passing star would be more than enough to dislodge the planet, and it’s impossible that the system formed in a tightly-bound stellar cluster, as our own is believed to have done.

“We can speculate the pair formed 10 million to 45 million years ago from a filament of gas that pushed them together in the same direction,” observed Dr. Simon Murphy of the Australian National University, one of the astronomers involved in the study.

Once the age of the system was known, it was possible to estimate the mass of 2MASS J2126-8140 as between 11.6 and 15 times that of Jupiter, which places the object firmly astride the 13 Jupiter-mass so-called “deuterium-burning” dividing line that separates planets and brown dwarfs.

With such a remote orbit, in the cold, distant reaches of its system, 2MASS J2126-8140 seems unlikely to host any sort of life as we know it; however, if it sits on the further end of the deuterium-burning line, it may generate enough heat to warm any moons it may possess (which could conceivably be as large as the terrestrial planets of our own solar system), and this fact—coupled with the system’s extreme youth—may be enough to foster some sort of biological evolution, unfamiliar to our experience but no less viable.

But the window is fast closing. Within a few million years, even a deuterium-burning brown dwarf will be unable to stave off the encroaching cold of deep space.  Beyond that, only the prospect of billions of years of darkness remains for this strange, lonely planet.

Read This Next
Lonely Planet
Scientists Find Nearby Planet the Same Size of Earth, Plan to Search It for Life
Accuracy Wall
Harvard and MIT Scientists Warn That James Webb Data May Not Be What It Seems
Outing Life
Swiss Government Scientist Says We May Be on the Brink of Discovering Alien Life
Sun Gazer
Researchers Want to Use the Sun As a Giant Telescope to Look for Aliens
Space Invaders
Study: There May Be as Many as Four Evil Civilizations in Our Galaxy
More on Off World
Heavy Metal
Yesterday on the byte
NASA Mars Rover Finds Metallic Object That Smashed Down on Surface
Small But Mighty
Yesterday on the byte
Baby Asteroid Photobombs James Webb On Accident
Little Guy
Yesterday on the byte
Scientists Prototype "Creeping" Lizard-Like Robot for Exploring Mars
READ MORE STORIES ABOUT / Off World
Keep up.
Subscribe to our daily newsletter to keep in touch with the subjects shaping our future.
+Social+Newsletter
TopicsAbout UsContact Us
Copyright ©, Camden Media Inc All Rights Reserved. See our User Agreement, Privacy Policy and Data Use Policy. The material on this site may not be reproduced, distributed, transmitted, cached or otherwise used, except with prior written permission of Futurism. Articles may contain affiliate links which enable us to share in the revenue of any purchases made.
Fonts by Typekit and Monotype.