This Moss-Filled Coffin Is Made Out of Fungus

"We are degrading organisms into dead, polluting materials, but what if we kept them alive?" 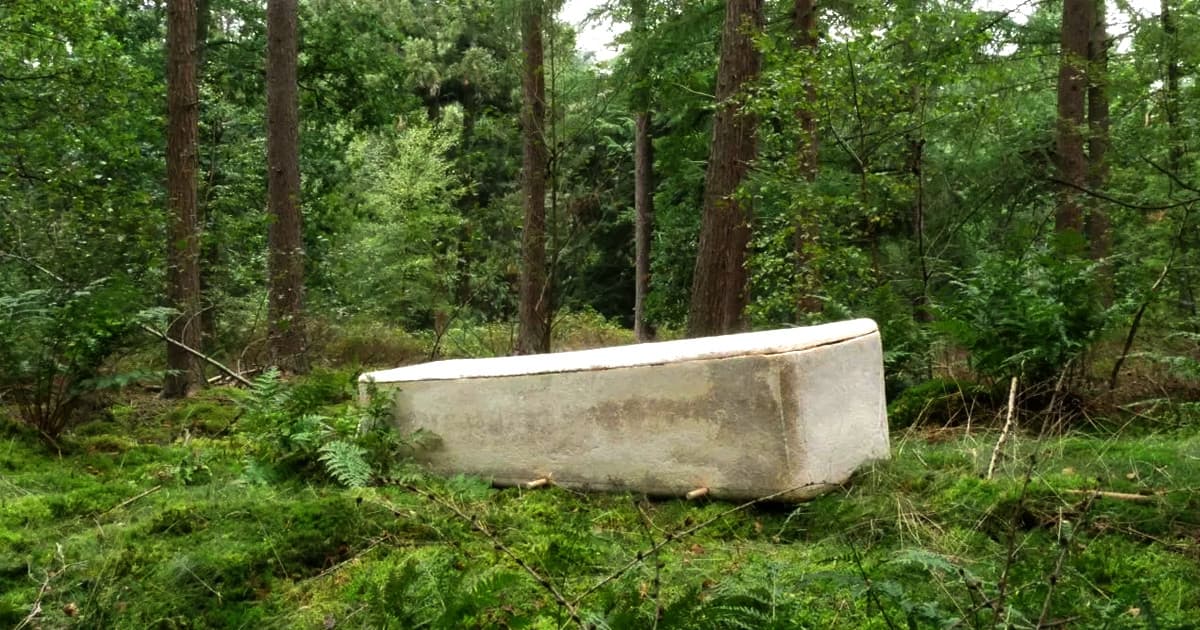 Designers from Delft University of Technology in the Netherlands teamed up with a local natural history museum to develop the "Living Cocoon," a moss-filled, "living" coffin made out of a special fungus.

The coffin significantly speeds up the time it takes for a human body — plus all the clothing and other materials that get buried along with it — to decompose, from roughly a decade to as little as two years, according to its inventors.

That's in large part thanks to its construction material of mycelium, a fast-growing, fungus-like bacterial colony that can grow into massive underground networks.

Mycelium is also able to neutralize toxic substances and provide nutrition to anything growing nearby, meaning that the soil will actually benefit from such a burial in the long term.

"The Living Cocoon enables people to become one with nature again and to enrich the soil, instead of polluting it," Bob Hendrikx, founder of Loop, the startup that developed the coffin, said in a statement.

To Hendrikx, it's about living alongside living materials. "We are currently living in nature’s graveyard," he argued. "Our behavior is not only parasitic, it’s also short-sighted."

"We are degrading organisms into dead, polluting materials, but what if we kept them alive?," he added. "Just imagine: a house that can breathe and a T-shirt that grows with you."

The researchers behind the Living Cocoon have already completed a funeral in which the deceased was buried in one, what they claim to be a world's first, as Dutch News reports.

The Living Cocoon echoes similar inventions, such as the "Infinity Burial Suit," dreamed up by green burial company Coeio. It's essentially a "death suit," with mycelia spores infused into its crocheted netting.

Loop is now investigating the positive effects and increases in biodiversity as a result of burying such a coffin.

"We want to know exactly what contribution it makes to the soil as this will help us to convince local municipalities in the future to transform polluted areas into healthy woodland, using our bodies as nutrients," Hendrikx added.

More on mushrooms: These Researchers Want You to Live In a Fungus Megastructure

Read This Next
Sundowned
Mexico Bans Startup From Future Solar Geoengineering Experiments
Knew It All Along
Exxon Scientists Knew About Global Warming for Decades While Company Denied It
Solar Slay
Solar Powered Machine Turns CO2 and Waste Plastic Into Valuable Fuel
Dim Sun for Breakfast
Startup Says It's Started Releasing Chemical Into Atmosphere to Dim Sun
Hidden City
NYC's Greenery Eats Up All the CO2 From Its Cars, Trucks and Buses "And Then Some"
More on Earth & Energy
Imagine Dragons
Yesterday on the byte
Miners Say "Sorry" for Losing Highly Radioactive Object Along Highway
Rock Battery
Jan 28 on the byte
Researchers Successfully Turn Abandoned Oil Well Into Giant Geothermal Battery
Do The Worm
Jan 27 on the byte
Scientists Name "Funky Worm" Amphibian After a Weird 70s Funk Song
READ MORE STORIES ABOUT / Earth & Energy
Keep up.
Subscribe to our daily newsletter to keep in touch with the subjects shaping our future.
+Social+Newsletter
TopicsAbout UsContact Us
Copyright ©, Camden Media Inc All Rights Reserved. See our User Agreement, Privacy Policy and Data Use Policy. The material on this site may not be reproduced, distributed, transmitted, cached or otherwise used, except with prior written permission of Futurism. Articles may contain affiliate links which enable us to share in the revenue of any purchases made.
Fonts by Typekit and Monotype.