We talked to the author of a recent study that complicates the likelihood that we're alone in the universe. 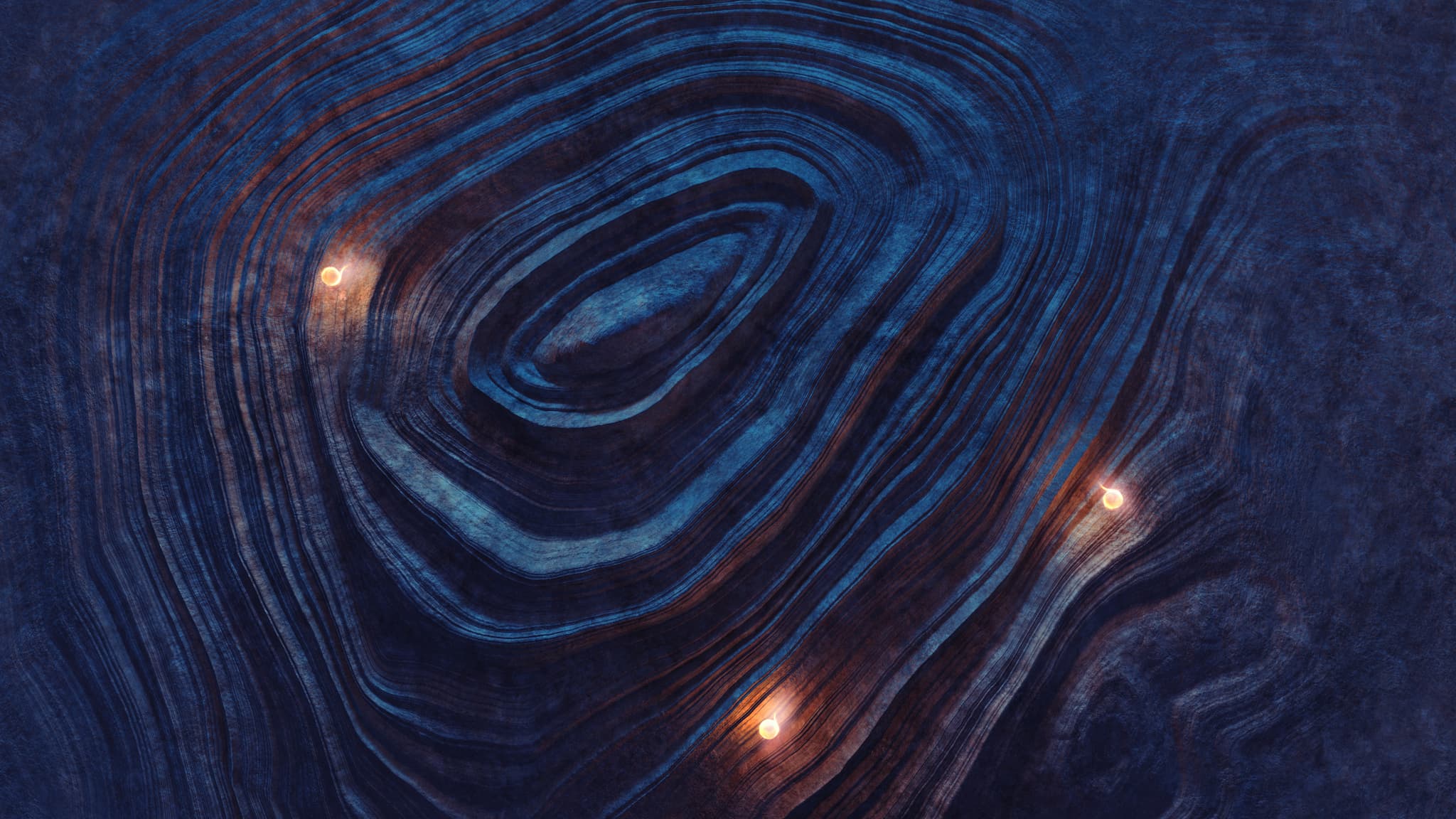 We are, almost certainly, the only intelligent life in the universe. But anyone who says they know for sure is full of hot air, argues new research. We simply don’t know enough about what’s out there to come up with a precise answer either way.

There are billions and billions of stars and galaxies out there. So where in tarnation are all the aliens? This is the central incongruity posed by the Fermi Paradox, which attempts to sort out why earthlings have not yet encountered extraterrestrial life. In the past, experts trying to make sense of the Fermi Paradox have looked to the Drake Equation to put a numeric value to the likelihood that extraterrestrial (especially intelligent) life exists anywhere other than Earth.

Some of these values are more or less straightforward, like the number of stars orbited by exoplanets. But others are highly speculative, argues research published earlier this month. And as such, any answer to the Drake Equation should be presented as a range of values, not just a single number devoid of context.

When they ran the numbers with these ranges in mind, the researchers found that there’s anywhere from a 53 to a 99.6 percent chance that ours is the only civilization in the galaxy, and a 39 to 85 percent chance that we’re the only intelligent life in the universe. But still, as New Scientist reported, most of the coverage of this study clung to the most pessimistic end of that range, even though the other numbers in those ranges are just as likely to be true.

To learn more, we reached out to Anders Sandberg, a senior research fellow at Oxford University’s Future of Humanity Institute and one of the scientists behind the new research. Here's our conversation, which has been edited and annotated for clarity (we have added all hyperlinks).

Futurism: First off, can you talk a little bit about your background? Why did you decide to enter this field, and why did you pursue this particular project? What kinds of questions do you like to answer?

Anders Sandberg: I got my PhD in computational neuroscience, simulating how the brain may store memories. But I was always interested in thinking about the future of humanity. This is how I ended up at the Future of Humanity Institute at the Oxford Martin School, at the University of Oxford. Here, I get a chance to deal with the biggest possible questions about the long-term future.

One of the most important ones is: "how risky is the future?"And one way of answering it might be to see how well other intelligent life might fare. Given that we don't see any, could it be that the universe is a dangerous place? Or just that it is pretty empty? Figuring out the balance between these two possible answers might give us valuable clues about our own chances.

F: Before this study, it seems that most people were calculating the Drake Equation and presenting a single value for the likelihood of extraterrestrial life. Why do you think that is? It seems like best practices would involve presenting a range of values and "showing your work" with statistics, so to speak. Why do you think this hasn't been happening?

AS: I think most people did it the simple way because they knew it was a rough estimate. That was, after all, what the equation originally was intended for. Why complicate something that you know is going to be crude? But as we argue, doing it the simplest way leaves out important uncertainties that biases the answers.

Another reason is that it is mathematically a bit messier — back in 1961 there were not even pocket calculators. Today it is trivial to do it by computer.

I often semi-joke that people say "this parameter is super-uncertain, so let us remember that it is uncertain and for the time being guess at it being 1/1000," and at the end conclude "... and after combining all our estimates we get the answer 42, which we should remember is uncertain!" But how uncertain? That is what we are getting at.

F: Did you and your team do anything differently beyond adding these extra ranges? What do you think past research was missing?

AS: What we did was mostly to add these uncertainty ranges (or in a few cases, uncertainty probability distributions). We also did some math on how different kinds of evidence, such as not seeing aliens at a number of stars, finding life elsewhere, or discovering ancient ruins would affect our estimates of the universe.

There have been some similar ideas. Claudio Maccone did a very similar calculation but did not set the uncertainty ranges in the same way, and Duncan Forgan has done somewhat similar Bayesian calculations. But I suspect many people are simply not comfortable with using this kind of mathematics.

F: As you ran your numbers, were you surprised to find such a wide range of probabilities that alien civilizations exist?

AS: In a sense, we knew we would get a wide range since we put it in there based on existing science and past publications. But it was delightful to see that, even with really optimistic estimates from the literature, there was a noticeable chance that we are alone.

"It was delightful to see that, even with really optimistic estimates from the literature, there was a noticeable chance that we are alone."

Futurism: I came across your work through articles with headlines saying that new research concluded we were definitely alone in the universe. But your actual work seems to present a more nuanced view. Sure, there might be a 99 percent chance that we are the only civilization out there, but there also might be a 40 percent chance. Do you think the coverage thus far has been fair or accurate? Has it been frustrating at all?

AS: The paper deals with a rather abstract idea — handling uncertainty about an unknown probability. That is at least two steps removed from everyday, solid reality. So in many ways I am thankful people have not misunderstood it worse. But there is a lot of explaining to do, including to some people who are angry because they think we have claimed something stupid. [Editor's note: Sandberg told New Scientist that he had already received many angry emails "from people who say I’m wrong because we’ve already met aliens."]

Our conclusion is basically "there is a pretty decent chance we are alone, given what we know, even if we are very optimistic about alien intelligence.”

F: How do you think your findings should impact the Search for ExtraTerrestrial Intelligence (SETI) or other initiatives to search for and contact extraterrestrial life? Should enthusiasts and scientists be encouraged or discouraged?

AS: I hope this study encourages people! I am myself part of the UK SETI Research Network and fully support their mission.

The main result is that we are currently very ignorant, but even a tiny bit of information can move our knowledge a great deal — and that matters for thinking about not just our place in the universe but also future risks to humanity.

So I hope biologists will see how much hinges on figuring out more about the origin of life, and especially if alternative genetic coding systems might lead to dead ends. Astrobiologists are trying to find out if there is life elsewhere in the solar system. Answers of "no," "yes, independently evolved," and "yes, but it has spread between the planets" give really valuable information. And SETI is, after all, looking for the most powerful evidence imaginable — were we to find some unequivocal evidence of intelligence, we could learn a lot about all the other parameters in a fell swoop.

It is an exciting time!

F: The big question: Do you think there's life, civilized or not, out there? Did your research change your mind?

AS: I think there is life and intelligence out there. The universe looks like it is infinite. But this research made me think it is likely far, far away.

F: How has your work progressed since you published this paper? Have you continued to explore this topic or have you switched focus?

AS: I have another paper which gives a totally different answer to the Fermi paradox. I wrote it somewhat in parallel, and mostly to explore issues of human future projects but also to deal with one possible Fermi answer. I don't think this answer is likely to be the correct one, but it was fun to work out. [Editor's note: In a follow up conversation, Sandberg said that the Cthulhu reference in the paper’s title was one of the things that led to unanimous agreement among him and his coauthors. “It was too good to pass up."]

Right now, my focus is on what I call  "grand futures." How much could we achieve in the future if we survive and get our act together? This will become a book eventually. I am exploring what engineering and physics tell us about the limits of very powerful civilizations. While this is more about what we can hope for and why we need to safeguard the future, it also has implications for what to look for in SETI. For instance, what kind of emissions should we expect from a supercivilization?”

F: What unresolved questions do you think should be the next big focus for this field?

AS: I think on one hand optical SETI [a research project that will use lasers to search for signs of technology from light-years away and is less prone to false positives] is really promising — laser signals are so much more effective than radio.

But there is much work to do in radio too, especially thanks to Breakthrough Listen [an undertaking that will scan the nearest million stars to Earth for any radio broadcasts that they may be sending]. Here we may want to use machine learning to try to figure out how to automatically detect that something is "strange," a cool problem in both machine learning and philosophy.

Meanwhile, the astrobiologists are gearing up to study exoplanet atmosphere spectra.

F: Beyond that, what's next for you?

AS: I have a pile of projects: estimating nuclear war probabilities, justice and existential risk, extended selves, how to get safe technologies faster, how to think about dangerous ideas, how to identify remote supercivilizations. And beyond, my grand future book project towers another one: the history of transhumanism.

But first thing's first. This week I am reading up on mining economics. Yes, really!

Read This Next
Blast Off
Former Astronaut Details Quest to Grow Cannabinoids in Space
RIP
Unfortunate Comet Flies Too Close to the Sun, Disintegrates and Becomes a Ghost
Deployment Confirmed
The Internet Is Losing Its Mind Over a Photo of Elon Musk Eating a Huge Potato Spiral
Space Junky
Head of Russian Space Program Appears to Threaten to Smash US With Space Debris
Jupiter Jokesters
Nitwits Claim Wrongly to Have Disproved the Existence of Jupiter
More on Off World
Ashes to Ashes
2:28 PM on the byte
NASA Lander Looks Beat as Hell in Final Selfie Before Death
Glimmers of Hope
Yesterday on the byte
Boeing's Starliner Mission Is Going Surprisingly Well, Actually
Wife Guy
Yesterday on the byte
NASA Astronaut Heard Rumor of Being Abandoned in Space From His Wife
READ MORE STORIES ABOUT / Off World
Keep up.
Subscribe to our daily newsletter to keep in touch with the subjects shaping our future.
+Social+Newsletter
TopicsAbout UsContact Us
Copyright ©, Camden Media Inc All Rights Reserved. See our User Agreement, Privacy Policy and Data Use Policy. The material on this site may not be reproduced, distributed, transmitted, cached or otherwise used, except with prior written permission of Futurism. Fonts by Typekit and Monotype.