Byte-Sized Review: The LG XBOOM 360 is a Portable Dance Party

Get ready to rave. 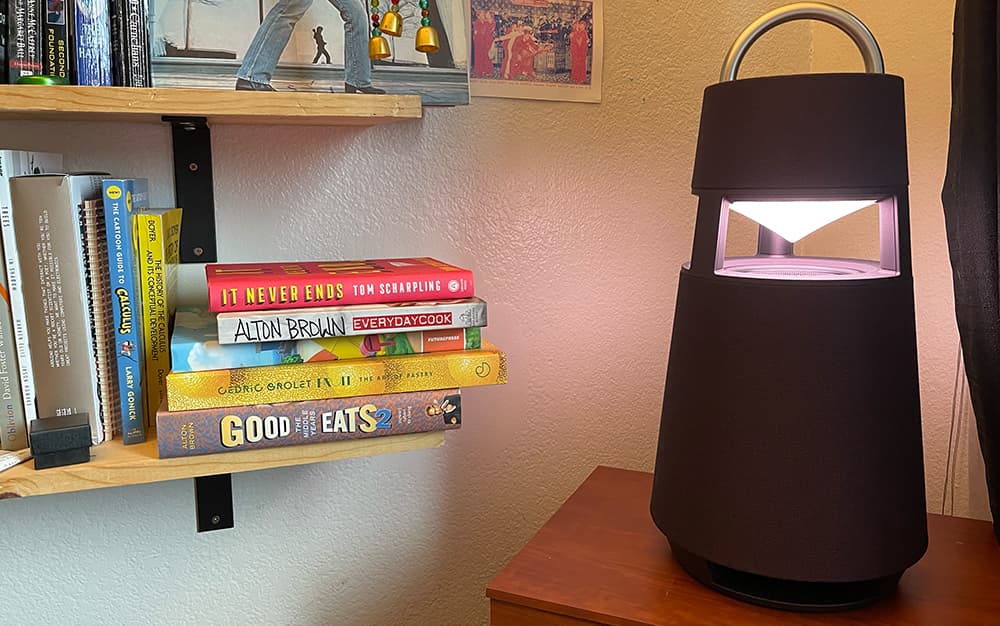 When I first met my friend Ezra at a burger restaurant a few years ago, they said, “You strike me as a dancer.” Nothing could be further from the truth. Remaining as static as possible isn’t simply a lifestyle choice — it’s the culmination of a life’s dream. It’s unclear what about me rings musical, but “getting jiggy with it” sounds like a grueling prospect. But what if there was a machine that made resisting my inner groove-thang impossible? The LG XBOOM 360 Speaker is far more than a simple Bluetooth speaker — it may just make me crack against the music. The speaker doesn’t just aim to bring sound to a room, but to practically flood it. Aside from its audio capabilities (which are abundant), this attractive Bluetooth speaker comes complete with mood lighting. The many more available features make it impossible not to get on your feet.

The LG XBOOM 360 is another in the line of XBOOM Bluetooth speakers made by LG. You wouldn’t know it by just looking at it. It’s designed to not simply be another piece of sound equipment, but to groove with the aesthetics of whatever room it’s in with its attractive space-age design. The handle on the top of the device is also intentional — like any great Bluetooth speaker, it’s built with portability in mind so you can bring the music with you wherever, whenever. Along with the room-filling sound, the speaker has a built-in mood light with three modes and nine presets. These modes are designed to accompany daily tasks like reading and meditation, and of course, dance parties. Everything from the sound to light is controlled via the LG XBOOM app, available on iOS and Android devices.

It’s unclear what exactly the LG XBOOM 360 looks like. Is it a piece of the weapons system on a nuclear submarine? Maybe it’s a scaled-down version of a trash can you’d find in a gentrified neighborhood. Whatever inspired its design, it’s certainly easy on the eyes, even if it’s not terribly obvious that it is in fact a Bluetooth speaker. Unlike many speakers, it’s a flat canonical shape, which contains one-inch titanium compressed horn tweeter and a 5.25-inch glass fiber woofer just under the mood light. The handle on the LG XBOOM 360 is steel, and as sturdy as it should be.

The LG XBOOM 360 speaker connects via wireless Bluetooth to wherever your music is stored, be it a laptop or a smart device. From there, a myriad of configurations let you optimize sound, whether you’re pumping out the jams or are simply relaxing to some soothing wind chimes. The customization possibilities are nearly limitless when it comes to the LG XBOOM 360’s lighting capabilities, considering there are up to 16 million different colors to choose from. Because it’s made with partying capabilities, it charges to full in about five hours and runs for about 10 hours on one charge. The speaker also provides omnidirectional sound. This means that listening to music on the LG XBOOM 360 won’t require you to find a “sweet spot.” Music, and any audio for that matter, should flood the room, providing crisp, clear sound in every corner. The music seemingly syncs to the bass and adds further ambiance.

LG XBOOM 360 Review: Is the Portable Bluetooth Omnidirectional Speaker Worth It?

There’s something pleasantly retro about the LG XBOOM 360 speaker. Back in the day, sound systems, like computers, were so massive you could practically walk inside of them. And while there are still speaker sets that are absolute units, plenty of power and fidelity can be gained from devices no larger than a bottle of Dr. Pepper. And while LG XBOOM 360 isn’t exactly a chonky boy, it is one of the larger wireless Bluetooth speakers around. It’s also one of the heavier ones, clocking in at just under 13 pounds. Hefty, to be sure, but not annoyingly so, especially when it’s plucked from the metal handle. The bottom of the device hides a discreet area full of access ports, including a place to plug in the charger, an Aux cord input, and a USB port in case you want to go analog.

Just under the handle are a handful of touch controls that handle everything from cycling through lighting modes, volume, and a play/pause button. Tapping into LG XBOOM 360’s full scope of features requires firing up the LG XBOOM app. After connecting it to an iPhone, I could cycle through music by firing up any music app. Testing out the sound was immediately surprising, considering how loud it was. A slight volume correction later, I began playing around with the lighting, cycling through a few different modes, and loading up some presets.

The most stellar (and underrated) aspect about the LG XBOOM app is that once I connected my device, it stayed connected. Sadly, half the battle with any Bluetooth-enabled device is keeping it connected to other devices. Powering on the LG XBOOM 360 and booting up the app takes seconds, and there’s no guesswork after the initial quick setup.

As far as features go, the app is fairly simple. From here, you can control sound, and tap into some built-in equalization settings. Handy, to be sure. But the real fun as far as the app is concerned is playing around with the LG XBOOM 360’s mood light. There are three modes:

– Ambient: Soft on the eyes for sleepy mornings, relaxed afternoons, and intimate evenings.
– Nature: Self-care-focused colors and ambiance in case you want to do some light reading or heavy meditation.
– Party: Blasts of color for casual parties and hardcore raves.

All three modes contain three presets, where you can choose one of 16 million colors. I’m leery whenever a huge number is thrown out by any product with “smart lighting.” This is a mood light after all, not a Photoshop file. Is anyone really going to be able to discern between purple and a slightly darker purple? That said, there are still plenty of customization options since colors are selected on both a hue and saturation line. While all three modes have their place, the coolest one is easily the aptly named Party mode. The hues cycle through through like a strobe, which looks especially cool in dimly lit rooms. These colors look great alone but are punctuated by some heart-pumping (or not-so-heart-pumping) tunes.

High Fidelity (Can You Hear Me?)

Before I get to the device’s audio capabilities, I should come clean. I’m a bit of an audio neophyte, the sort of person who simply doesn’t “get” Steely Dan. I’m told by those with keener music palettes that Steely Dan is “jazz-inspired” and “expertly produced” and “not awful.” All those things and more may be true, who’s to say? To me, in a world where the Spinal Tap one-to-11 rock scale exists, Steely Dan hovers somewhere around a six. And there’s no judgment, I assure you. I’d sooner let a stranger read my internet search history before letting them glance at my iTunes library. The jams I’m blaring out of the LG XBOOM will be decidedly uncool. Any Bluetooth speaker can make Van Halen or HAIM sound good, but what about Billy Joel’s sleepy late ‘80s entry “The Bridge”?

The Piano Man’s hook-heavy pop sounded great from the get-go. As someone who mostly listens to music via headphones (and cheap ones, at that) listening to songs I’ve heard countless times felt strangely new. Music sounded layered, the way orchestral music sounds far better when you hear it in an opera hall. A few hours were spent listening to not only songs from “The Bridge,” but a few other Joel eras, and they all sounded great.

The whole omnidirectional speaker thing sounded like complete flimflammery. But the “360 Panorama Sound” the LG XBOOM 360 nabs its moniker from is, I’m happy to say, no joke. I queued up Phil Collins’ “Sussudio” at medium volume in the living room. Walking to the other end of the house, it felt as if the hit single from the “No Jacket Required” album was following me. My ears usually don’t deceive me, but the music sounded nearly the same, and almost nearly as full, even when I wasn’t near the speaker. It’s a trippy but welcome feature. For anyone who listens to audiobooks or podcasts, it's incredibly convenient to not have to push pause if you need to schlep to the kitchen real quick.

The audio and lighting qualities are pretty solid separate, but together they’re even better. Ambient and Nature lighting modes pair nicely with easy-listening tunes, but Party lighting really helps amplify booming lows and explosive highs. The lights feel like an instrument themselves, matching colors and frequency of flashes to the rhythm of whatever song is playing. It’s enough to make even the most ardent couch potatoes want to move it (move it).

Gloria Estefan was right. Eventually, the rhythm is, in fact, going to get you. The LG XBOOM 360 Bluetooth speaker provides true 360 sound, no matter how lame your music tastes may or may not be. With premium equipment like this, price is almost always a sticking point, but considering its build quality, it’s a pretty fair bargain. After all, it’s not simply a speaker — it’s a sleek room piece that’s small enough to tuck away, but large enough to punctuate the design in any room. The customizable mood lighting not only amplifies the music-listening experience, it makes it a full-blown party machine.