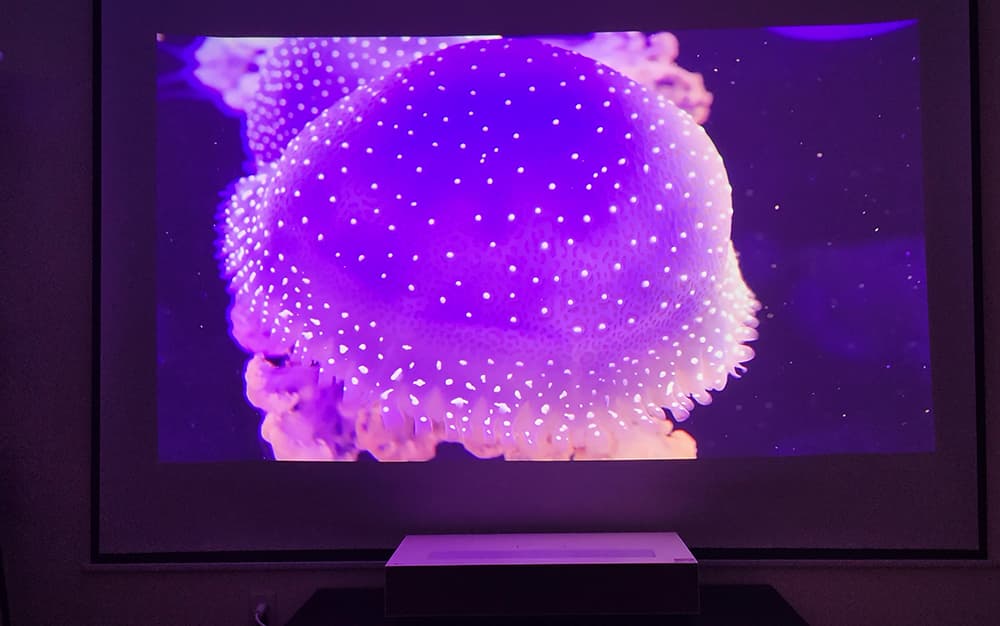 Something happened a couple of years back (won’t say what), that made going to the movie theater an incredibly daunting prospect. Luckily, this coincided with some serious advancements in home projector technology, including the LG CineBeam. Instead of casting its image from a distance, the projector image shoots up, which makes home projection far easier than it’s ever been before. Here is our LG CineBeam review.

Easy Home Projection: No need to mount a cumbersome device to a ceiling. LG CineBeam 4K works into any existing entertainment center, so long as you have 120 inches of wall space to point it at. Just plug it in, adjust the focus, and stream away. Short-throw projectors don’t have to project from a distance like a typical projection. Just place it 7.2 inches away from the nearest wall to enjoy cinema-quality visuals.

Biggest and Brightest: LG CineBeam provides a seriously bright picture. An impressive 3,700 ANSI Lumens means you don’t have to worry about waiting for nightfall to watch your favorite movies and shows. Not only is the picture bright, but you can also tap into the same clarity as much modern television with full UHD 4K.

Simple Screen Adjustment: Most projectors require tricky maneuvering and perfect placement for the best picture quality. LG CineBeam allows you to adjust the focus from an easy access wheel on the device, so you can spend more time actually streaming.

Attractive Minimalist Design: Cinema quality viewing aside, many projectors simply lack any form along with all their function. LG CineBeam’s exterior aesthetics are as innovative as the tech within the device and blend seamlessly into any room.

Smart, Simple Streaming: LG CineBeam comes powered by LG Smart TV backend, complete with apps for all your favorite streaming destinations including Netflix, Hulu, and Disney Plus. You can even sync it up to Google Assistant or Alexa smart home hubs to control everything via voice. Or, if you’re a little more old school use the simple Magic Remote.

LG CineBeam Review: Is The Short-Throw Projector Worth It?

My experience with home projectors begins and ends with devices under $1,000. My go-to, the Epson EpiqVision, is a portable number with a built-in streaming back end that operates like just about every other projector has. You point the device at the wall, adjust the focus, and watch “Oh Brother, Where Art Thou?” for the millionth time. Many inexpensive projectors work by simply pointing them at a white wall, but considering the LG CineBeam’s image capabilities, I decided to invest in an actual projection screen.

From the get-go, CineBeam was a world apart from any other home projector I’ve ever seen. At first glance, it doesn’t actually look like a projector. In fact, I’m not sure what it looks like. The front-facing portion covered in fabric almost resembles a soundbar. Almost. Setting up the machine was mostly painless; soon, I was off the races.

The first thing I tried was testing out the HD capabilities by streaming some 4K nature videos on YouTube. The clarity of the color was intense, to say the least. This initial testing was only supposed to take 15 minutes, but I quickly descended into a rabbit hole for an hour. The only thing that stopped me from exploring Earth’s fauna in glorious 4K was a knock at my front door. My niece, Chloe, stopped by for a movie night.

We planned to screen “Sonic the Hedgehog 2,” which hit theaters earlier this year but was recently released on streaming platforms. The experience was intense. The picture came in as crisp as possible, and didn’t slouch for a second once the action started flying. And this is Sonic we’re talking about, speed is sort of the name of the game. To help further mimic the theater experience, we cranked the sound almost all the way up. I say almost because the speakers here are incredibly powerful. Stronger in fact than any television I’ve ever owned, not to mention any projector I’ve ever used. Volume aside, the sound was almost as cinematic as the picture, with an almost IMAX quality that makes you feel every flashy explosion just above your chest. It certainly doesn’t hurt that the movie was a family-friendly romp, but the cinematic intensity here would probably improve less-than-perfect films.

The back of the LG CineBeam provided even more possibilities for fun. There are two HDMI inputs here so you can do more than simply project movies. Why not project games? Sure, “Super Smash Bros. Ultimate” is fun, but playing it on a 120-inch screen makes the game feel practically new again. Before the night was over, I gave “Mario Kart 8 Deluxe,” and “The Legend of Zelda: Breath of the Wild” a run in the LG Cinebeam, and these games fared equally well. I’m hard-pressed to think of a game that wouldn’t be improved on a massive screen. What’s important to highlight here is that I experienced no lag when gaming on LG CineBeam, which is a feat many projectors still struggle with.

After five days of making the LG CineBeam my primary entertainment screen, I’m hard-pressed to find a single flaw. Accessing the back of the device to switch up inputs, or simply flipping through channels using the LG Magic Remote is seamless, and the focus adjustment dial on the top of the device is something I hope becomes an industry standard. LG CineBeam could easily be a dedicated home-theater projector, but there were times I could see this device outright replacing my living room television completely.

LG CineBeam Review: Is It Worth It?

Of course, this flaw-free projection comes with a massive price tag, easily making it one of the most expensive home projectors available right now. However, unlike other short-throw projectors, LG CineBeam is no slouch in the brightness department, topping out at 3,700 ANSI lumens. Its processing prowess also makes it perfect for gaming and live events, when speed is king.

Despite the gigantic investment, it’s hard to relay the glee of watching a theater release on the comfort of your own couch, without having to spend extra cash on parking, popcorn, and a large Coke Zero Sugar. If you’re looking to truly mimic the theater experience, LG CineBeam is not only the best, but it’s more importantly, the easiest to actually operate.