Best Projectors for Viewing and Gaming in 2022 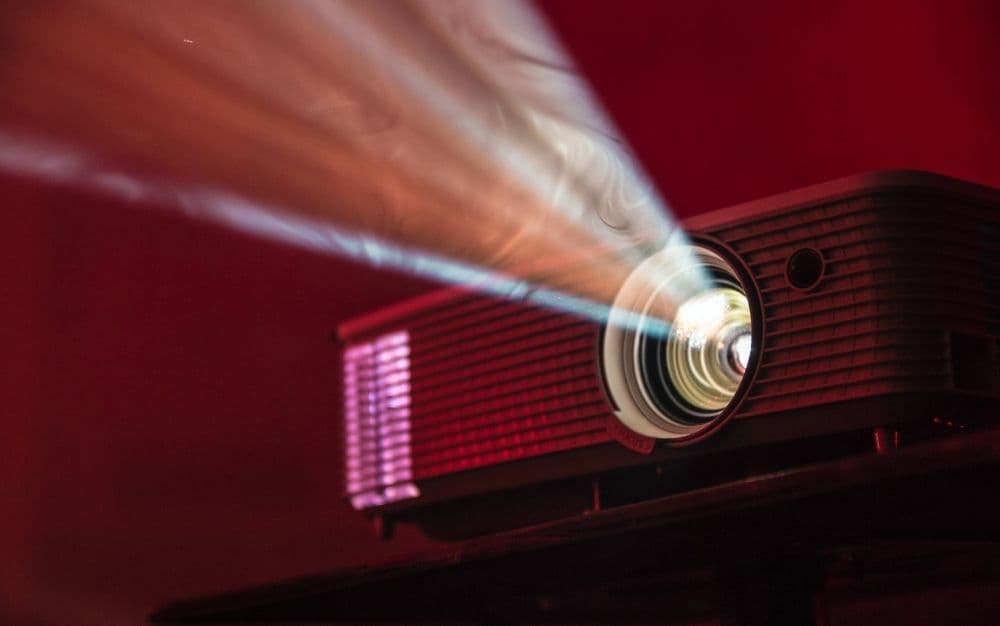 Bring on the popcorn: Home theater projectors can turn every evening into a night at the movies. These projectors go well beyond the grainy images you remember in science class. We’re talking 1080p and 4K with bright colors and rich, deep darks. They vary in their brightness (lumens), and some work better under certain conditions (daylight vs. complete darkness).

Your setup can help you decide on the best projector for your needs. However, decide on a budget before you jump at the first model that says “theater quality.” You can find budget models (we’ve included one), but some of these projectors rival the sound and picture quality found in a movie theater and the price tag to prove it. We’ve made our top picks and included tips to help you decide on the projector type that will meet your needs and cinematic standards.

How We Picked the Best Projectors

Projectors are an investment in your home entertainment. To help you find the best projectors to suit your needs, we looked at the projector system and configuration, brightness, throw ratio, and noise when making our picks.

Projector system and configuration: OLD, LCD, laser, and LCoS systems offer differing levels of clarity and quality. However, we also balanced the price with the performance. Some systems improve picture quality, but the price hike isn’t quite worth it.

Brightness: Brightness is measured in lumens. However, lumens alone don’t determine the overall brightness. We also considered how the lumens functioned with the projector system.

Throw ratio: The throw ratio determines where the projector can be used, such as a small or large room.

Noise: Small projectors get nailed for their noisy fans. The models on our list had some noise but not enough to distract from the viewing experience.

Why It Made The Cut: The Epson 5050UB brings incredible picture quality, contrast, and color to any and all content to get the best projector spot on our list.

The Epson Home Cinema 5050UB hits a high note on many of the important features, making it a great pick for a home theater. The motorized lens alone sets it apart from many models in the same category. They can move on the horizontal and vertical to fit most setups without you having to manually move the projector to adjust the picture location. The motorized zoom can also add 2.1x magnification.

It comes with a remote that matches its body size—large. However, you can use that remote to control the motorized features (so no getting off of the couch). But, if we’re being picky, the body itself is big, as is the remote and the noise levels.

Why It Made The Cut: The EpiqVision Mini provides the (laser) power of a much bigger projector in a small, lightweight size that’s perfect for moving around the house or outdoors.

Cons
— Too slow for gaming
— Brightness

The Epson EqipVision Mini has laser power to become the best portable projector. It measures 5.3 inches by 6.9 inches by 6.9 inches and weighs only 4.7 pounds. That’s small enough to move around the house or possibly hit the backyard for an outdoor movie night. With built-in Android TV, the EqipVision easily downloads apps. However, it’s also Wi-Fi capable and has two HDMI ports to access all of your favorite movies and content. (However, you’ll have to connect the latter with cables.)

The laser increases the overall life of the projector with an estimated 20,000 hours. (That’s a lot of viewing.) It can also connect to mobile devices or computers using Chromecast.

For the size and price, you get excellent color, though the brightness isn’t as impressive as what you’ll find on more expensive, full-size models. And, while you can download games through Android TV, the response time will be a disappointment on many games. However, for streaming and portability, the EquipVision will keep the picture flowing beautifully.

Why It Made The Cut: The use of the still exclusive LCoS technology creates a contrast that’s hard to beat at any price range, making this the best 4K projector money can buy.

The Sony VW325ES 4K HDR Home Theater is easily the best 4K projector currently on the market. It features LCoS (liquid crystal on silicon) technology (Sony calls their version SXRD), providing higher contrast ratios than are even possible with LCD or DLP. The depth of the darks and brightness of the colors goes beyond anything the competition offers. The result is life-like images and clarity you can’t find on another machine.

Sony also packs in impressive image processing to put all that contrast to good use to replicate HDR. (No projector can currently reproduce HDR, but the Sony comes close.) It also has a motorized lens and zoom, allowing you to use it in most rooms without manually adjusting the projector.

There are some big downsides with this projector, mostly the price. It’s outrageously expensive. But if you’re putting together the ultimate home theater, it’s an investment you won’t regret. The other issue is that this isn’t the brightest projector out there, which is a little surprising considering the price. It just means you need to have it in a dark room to get the full visual benefits.

Why It Made The Cut: From the starry looks to the built-in sound system, this projector offers the versatility for a powerful home theater system.

The Anker Nebula Cosmos Max stands out as the best home theater projector for its combination of good looks and versatile performance. The space-y top hides an impressive cinematic, built-in sound system. The four speakers work with Dolby Digital Plus, filling the room for an immersive experience.

However, it’s the quality of the 4K that we love. Sharp, clear images are the result even if you’re dealing with low-resolution sources. The simplicity of the Android interface also got a big thumbs up. The setup and use are fast and simple.

However, take note that the Cosmos Max has a long throw ratio to create big images.

Why It Made The Cut: The BenQ falls under $1,000 but has the specs for gaming or a sophisticated home theater.

The BenQ HT2150ST still costs a good chunk of change, but it comes in under $1,000 and offers performance that looks higher-end than the price suggests making it the best budget projector. Its single DLP chip and six-segment color wheel create better color accuracy. It gives up some brightness in favor of color, but it will work as long as it’s not used in a room with large windows.

With this projector, you can transform smaller rooms in a gaming den pretty easily. A short throw lens and soft case let you take the BenQ to a friend’s house for gaming or to catch a show together. This model also offers a stereo sound system to complete the gaming experience. If you’re not a gamer, you still get that impressive contrast, sound system, and beautiful, accurate colors and contrast.

The downside is that it can’t do more than 1080p, and you might have to block out ambient light for the best viewing. However, the BenQ is the best budget projector for gamers or those ready to get serious about their home theater.

Things to Consider Before Buying a Projector

The most affordable projectors are digital light processing (DLP) or LCD projectors. Both are lamp based, with the lamp slowly degrading over time. LCDs typically have sharp, crisp images when compared to DLP and can have a lower lumen count, but because of their design appear brighter. You’ll eventually need to replace the lamp used in these projectors. DLP and LCD projectors can easily cost under $1,000, with some of the budget models coming around $500. However, the best models will fall in the $1,000 to $1,500 range.

Laser technology lasts much longer than the average lamp used in a projector. A laser projector also emits exact colors rather than shining a lamp through a color wheel to create a picture. Consequently, they provide brighter, more accurate colors. However, these projectors start at around $1,700 to $2,000.

The final type contains liquid crystal on silicon (LCoS). Only a few manufacturers offer this technology, but the results are incredibly crisp, clear pictures that go well above what a DLP, LCD, or laser projector can do. However, they have a price that rivals a used car.

The throw ratio is the ratio between the image size and the projector’s distance from the screen. Long-throw projectors are placed behind the viewers and need to be about 10 to 20 feet from the viewing surface. Short-throw projectors create a large image from a few feet or even a few inches away from a screen or wall. Short-throw models can work in a small room, but long-throw models will need more space.

Projectors with 4K aren’t as common as TVs. That’s because it’s much harder to create a 4K projector due to size limitations. The good news is unless you have a dedicated theater room, chances are you’ll never notice the difference between 4K and 1080p, as long as the latter is of good quality. However, if you are investing in a real home theater that will be completely dark (and you’ve got an eye for digital media), a 4K projector will make a difference in your viewing experience. Otherwise, a high-quality 1080p projector provides almost identical picture quality.

The best portable projector can work just as well outside as it can in your living room, though you might have to give up on the best color accuracy and clarity. If you’re viewing in a room where there are some windows, a projector with higher lumens will keep the images visible when there’s still daylight.

Also, consider how you’ll view your content. A projector screen offers the best surface and brightest colors. However, a wall can work, but remember, any texturing on the wall will degrade the picture because every bump casts a shadow.

Q: What kind of projector should you get?
How and where you plan to use the projector determines the type you should get. For home theaters, a high-quality 1080p LCD model will work for most people. However, if you love your visuals and you have access to a dark theater room, a laser 4K will provide the best viewing experience. The latter will also cost a lot more.

Q: Screen or no screen?
You’ll get better viewing with a screen. Screens often have coatings that further enhance colors, contrast, and blacks. A textured wall will create small shadows that distort colors and clarity. Some projectors have settings that account for the wall color, but most images will look a little off when projected onto a wall.

Final Thoughts on the Best Projector

The Epson Home Cinema 5050UB2-4 creates a home theater experience that will make you want to stay home. The motorized features can work in a variety of spaces, too. If you’re working on a budget, the BenQ HT2150ST projects clear, sharp images and has a lag time and portability that works for gaming.