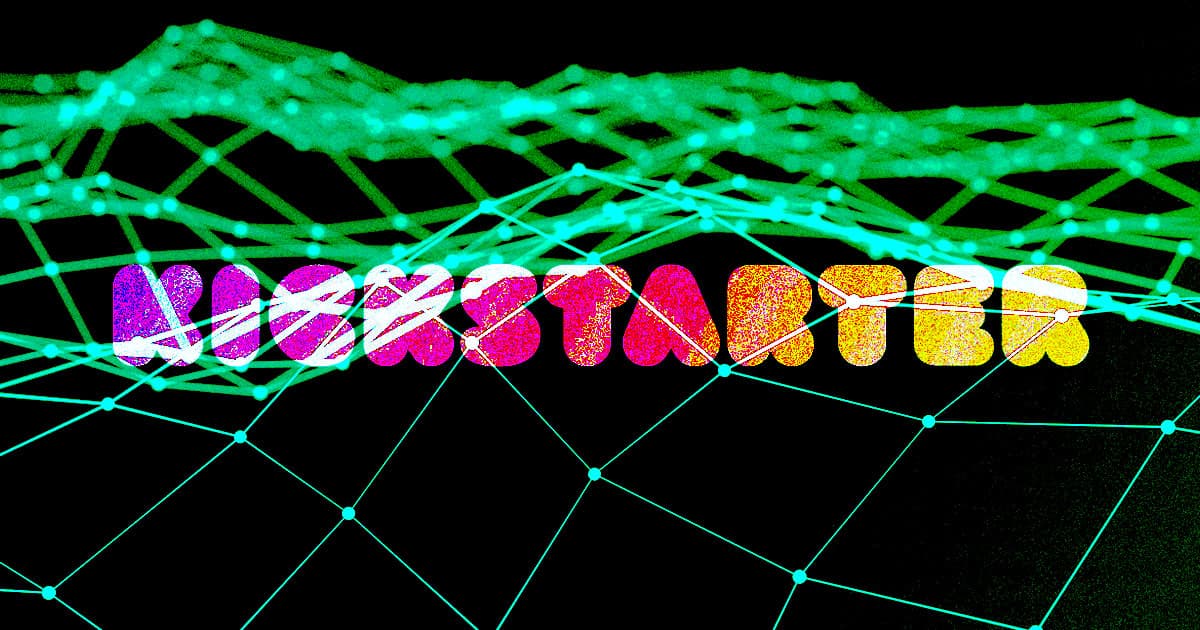 The OG crowdfunding platform is moving to the blockchain, and its users are legitimately furious about it.

First reported by Bloomberg, news of Kickstarter's decision to go crypto comes as the company tries to regain legitimacy as project and product crowdfunding, both of which it ushered in, have faded from prominence.

The company is reportedly building a currently-unnamed blockchain-based platform to replace its current system at some point in 2022, which will be based on the Celo blockchain cofounded by none other than newly-resigned Twitter CEO Jack Dorsey.

While cryptocurrency mining has historically been disastrous for the environment, Celo claims to be "carbon-negative" via offsets.

Critics of Kickstarter's move, however, either don't know about or don't believe that detail — and, to be fair, carbon offsets in crypo have already drawn criticism.

She wasn't the only crowdfunding figure to be upset by the news for environmental reasons.

"I cannot overemphasize how heartbroken this news makes me," tweeted designer Jeeyon Shim, whose game "The Shape of Shadows" was also funded on the platform. "Environmental stewardship isn’t just a big part of my work, it is one of my core values as a person."

"I genuinely love Kickstarter," Shim added. "I strongly urge the company to reconsider this decision."

The company claims that the new protocol won't change how people use the site, but beyond environmental concerns, others just don't see what purpose the move serves.

"Like 99 percent of crypto articles, this doesn't list a single reason why 'moving to blockchain' will improve the service for users in any way," novelist Lincoln Michel tweeted. "The only thing it says is that Kickstarter hopes to become 'relevant' if it's on blockchain."

Indeed, it's hard to read this move as anything other than an attempt to stay relevant amid the crypto bubble — and if these creators' gripes are any indicator, users may not be as thrilled by Kickstarter's blockchain maneuvers as the company itself.

Read This Next
La La La
SBF's Dad Kept Sticking His Fingers in Ears During Court Hearing
Sword Art Online
Guy Who Invented the Word "Metaverse" Building His Own Metaverse
Rube Goldbergian
The Dune NFT Project Is Back With an Inscrutable New Scheme
Crypto Fail
The CEO of Coinbase Gets Brutally Owned, May Never Recover
Sad!
Melania Trump Accused of Secretly Buying Her Own NFT to Avoid Disgrace
More on Future Society
Bird Crap
Feb 4 on the byte
It Looks Like Elon Musk Is Actually Building a Twitter Payment Platform
Balloon News
Feb 3 on futurism
China Says "Spy Balloon" Soaring Over America Is Completely Innocent
Down in Flames
Feb 1 on the byte
Elon Musk Apparently Thinks Twitter Is a "Flaming Dumpster Rolling Down the Street"
READ MORE STORIES ABOUT / Future Society
Keep up.
Subscribe to our daily newsletter to keep in touch with the subjects shaping our future.
+Social+Newsletter
TopicsAbout UsContact Us
Copyright ©, Camden Media Inc All Rights Reserved. See our User Agreement, Privacy Policy and Data Use Policy. The material on this site may not be reproduced, distributed, transmitted, cached or otherwise used, except with prior written permission of Futurism. Articles may contain affiliate links which enable us to share in the revenue of any purchases made.
Fonts by Typekit and Monotype.