While others plan trips to the Moon or Mars, JAXA has Phobos and Deimos in its sights. 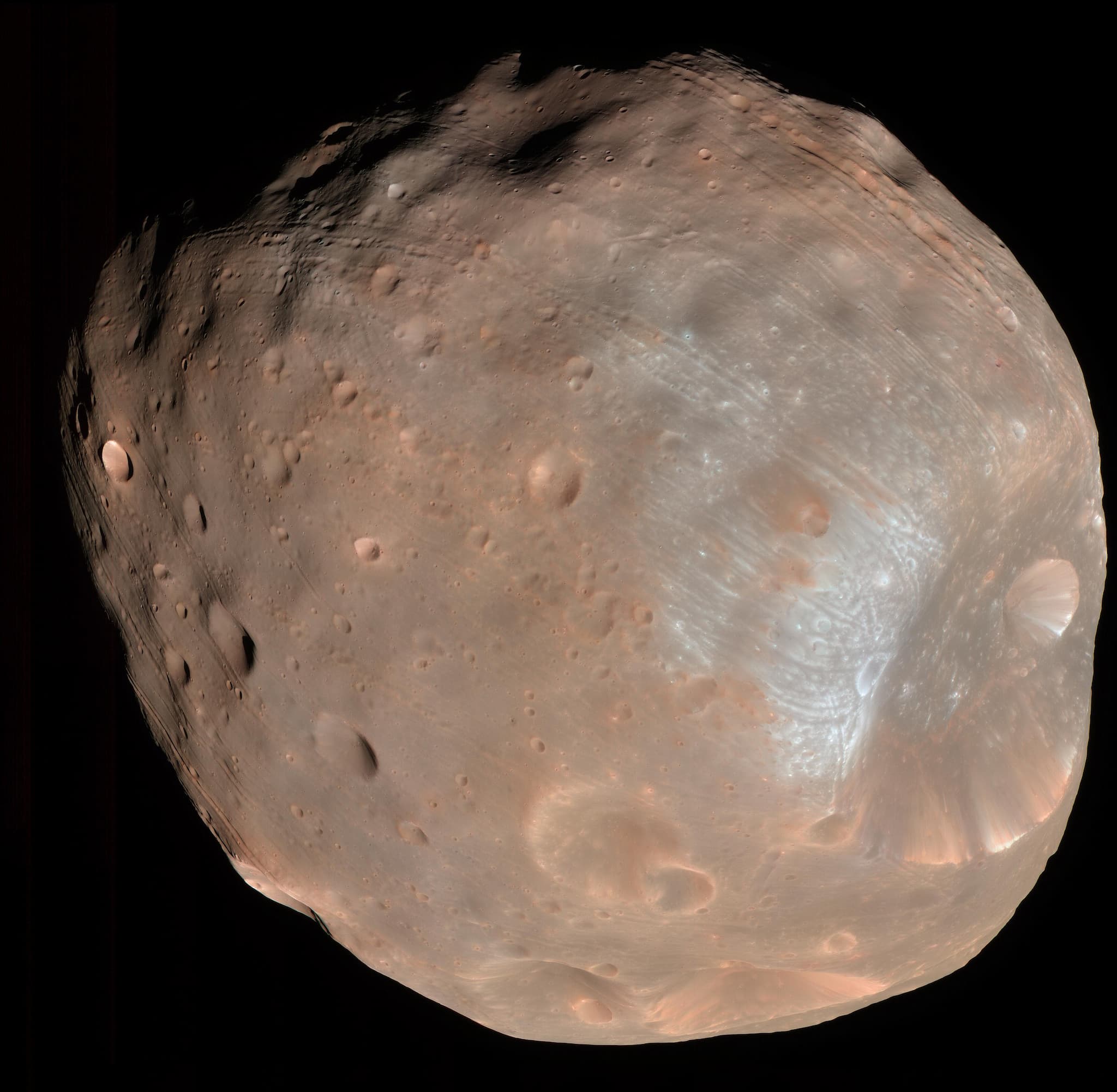 Image by NASA/JPL-Caltech/University of Arizona

In the coming decades, the world’s largest space agencies hope to mount some exciting missions to the Moon and to Mars. Between NASA, Roscosmos, the European Space Agency (ESA), the Chinese National Space Agency (CNSA) and the Indian Space Research Organization (ISRO), there is simply no shortage of proposals for Lunar bases, crewed missions to Mars, and robotic explorers to both.

However, the Japanese Aerospace Exploration Agency (JAXA) has a different mission in mind when it comes to the coming decades. Instead of exploring the Moon or Mars, they propose exploring the moons of Mars! Known as the Martian Moons Exploration (MMX) mission, the plan is to have a robotic spacecraft fly to Phobos and Deimos to explore their surfaces and return samples to Earth for analysis.

The spacecraft would be deployed sometime in the 2020s, and would be tasked with two main objectives. The first would be to help scientists determine the origins of Phobos and Deimos, which has been a subject of debate for some time. Whereas some believe that these moons are capture asteroids, others have argued that they were created when fragments ejected from Mars (due to giant impacts on the surface) came together.

As Dr. Masaki Fujimoto, a Professor at JAXA’s Institute of Space and Astronautical Science (ISAS) and the Team Manager of the MMX mission, told Universe Today via email:

MMX will land on Phobos and acquire samples of at least 10 grams from more than 2cm below the surface. Analysis of samples returned to Earth will clarify the nature of the asteroid that led to the formation of the moon. Deimos observations will be limited to flyby imaging, but combined with ground data to be obtained for Phobos, we should be able to constrain its origin in a substantial manner.

The second objective focuses on the characterization of conditions both on and around the moons of Mars. This includes surface processes on Phobos and Deimos, the nature of the environment in which they orbit, and the global and temporal dynamics of Mars atmosphere — i.e. dust, clouds and water vapor.

“Airless bodies such as asteroids are exposed to space weathering processes,” said Dr. Fujimoto. “In the case of Phobos, an impact event on the surface releases many dust particles. Unlike an asteroid in the interplanetary space, dust particles will not be simply lost but will orbit around Mars and return and hit the Phobos surface. This is regarded as the reason that Phobos has a very thick regolith layer. Knowing this process is to know the attributes of returned samples better.”

Another major objective of this mission is to learn more about small bodies coming from the outer Solar System. As the outermost rocky planet, Mars’ orbit marks the boundary between the terrestrial planets — which have solid surfaces and variable atmospheres (ranging from super-thing to dense) — and the gas and ice giants of the outer Solar System that have highly dense atmospheres.

Because of this, studying Mars’ moons, determining their origin, and learning more about the Martian orbital environment could teach us a lot about the evolution of the Solar System. Not only does such a mission present opportunities to study how planets like Mars formed, but also the process of by which primordial materials were transported between the inner and outer Solar Systems during its early history. As Dr. Fujimoto explained:

These small bodies were the delivery capsules for water from outside the Frost Line to the Habitable Zone of the solar system, where our planet is situated. Earth was born dry and needed delivery of water for its habitability to be switched on at all. It is likely that one of the (failed) deliveries led to the formation of Phobos, and, sample analysis will tell us about the failed capsule.

This is obviously the case when the capture idea turns out to be correct. Even for the case of giant impact, the scale of the impact is considered to be not too gigantic to alter fully the materials, implying that sample analysis would tell us something about the impactor asteroid.

As it stands, the probe is scheduled to launch in September 2024, taking advantage of the fact that Earth and Mars will be at the nearest point to each other  in their orbits at this time. It will arrive around Mars by 2025, conduct its studies for a three-year period, and then return to Earth by July of 2029. Once there, it will rely on a suite of scientific instruments to conduct surveys and obtain samples.

Details on the mission profile and the instruments were included in a presentation made by Dr. Fujimoto and the MMX Science Board members at the recent 48th Lunar and Planetary Science Conference. The mission profile and information on the objectives were also made available in an abstract that was issued in advance of the upcoming European Planetary Science Congress 2017.

The mission will also leverage some key partnerships that JAXA is currently engaged in. These include an agreement reached with NASA back in late March to include the Neutron and Gamma-ray Spectrometer (NGRS) in the MMX’s instrument suite.  And in April, JAXA and the National Center for Space Studies (CNES) signed an Implementation Agreement (IA) that would allow the French national space agency to participate in the mission as well.

If all goes as planned, JAXA will be spending the next decade gathering information that could bridge findings made by Lunar and Martian missions. Whereas lunar research will reveal things about the history of the Moon, and Martian missions will offer new insights into Mars’ geology and evolution (and perhaps if life still exists there!), the MMX mission will reveal things about the history of Mars’ moons and the early Solar System as a whole.

Other proposals that JAXA is currently working on include the Jupiter Icy Moons Explorer (JUICE) and SPICA, two missions that will explore Jupiter’s Galilean Moons and conduct infrared astronomy (respectively) in the coming decade.

Read This Next
A Sip of Opal
NASA Discovers Precious Gemstones on Mars
Martian Oases
Scientist Proposes Growing a Forest Inside a Bubble on Mars
Big Impact
Meteorite Hit Mars So Hard NASA Thought It Was a Quake
Palliative Care
NASA's Mars Lander Refuses to Die Even Though It's Supposed To
Signs Of Life
NASA Seems Awfully Excited About Finding Organic Matter on Mars
More on Off World
Killernova
Yesterday on the byte
Scientists Find "One in Ten Billion" Star System Primed to Explode in Titanic Kilonova
Lonely Planet
Feb 5 on futurism
Scientists Find Nearby Planet the Same Size of Earth, Plan to Search It for Life
Take Cover
Feb 4 on the byte
Space Startup Blows Up Another Giant Inflatable Space Station Module
READ MORE STORIES ABOUT / Off World
Keep up.
Subscribe to our daily newsletter to keep in touch with the subjects shaping our future.
+Social+Newsletter
TopicsAbout UsContact Us
Copyright ©, Camden Media Inc All Rights Reserved. See our User Agreement, Privacy Policy and Data Use Policy. The material on this site may not be reproduced, distributed, transmitted, cached or otherwise used, except with prior written permission of Futurism. Articles may contain affiliate links which enable us to share in the revenue of any purchases made.
Fonts by Typekit and Monotype.