The level of performance campers have been waiting for. 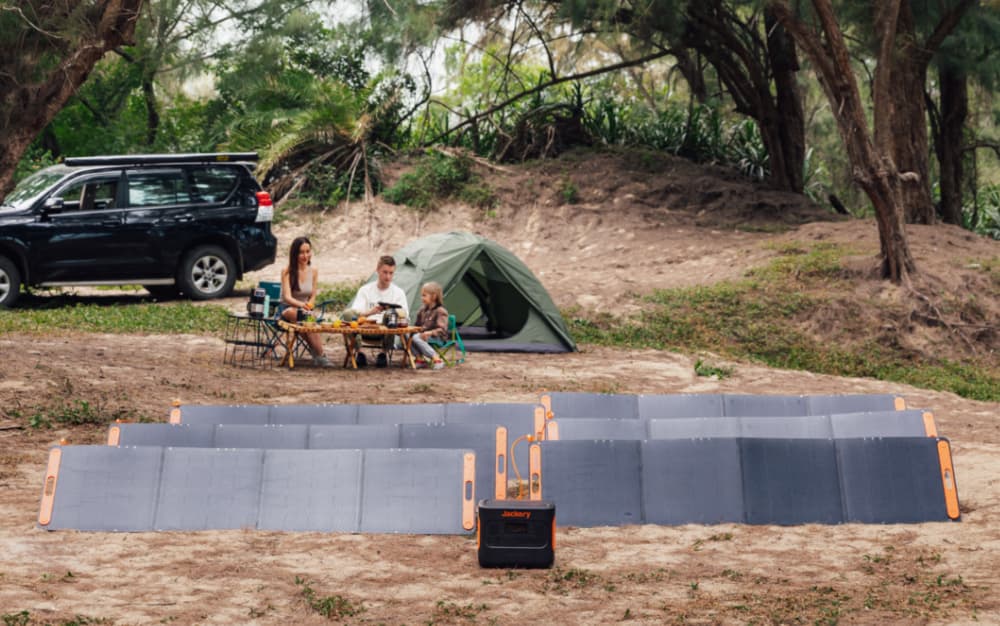 Jackery announced the Solo Generator 2000 Pro and SolarSaga 200W portable solar panel at an event held in New York City on May 10. Both gadgets are are bundled together in a $6,199 package that can help ease your reliance on the electrical grid, or provide power in situations where you won't be near an electrical line, like camping.

The Solo Generator 2000 Pro is an ultra high-capacity battery equipped with three AC ports, two USB-C PD ports, two USB-A ports, and one 12-volt car port. According to Jackery, this port selection would allow you to power a portable grill for 100 minutes, fully recharge a laptop 16 times, or continuously use a projector for 24 hours. Clearly, the Solo Generator 2000 Pro was designed to handle the needs of campers.

On the design side, the company is especially proud of the Solo Generator 2000 Pro's foldable handle, which makes the 43-pound battery easier to carry, and its relative silence while under full load.  Some campgrounds have "quiet hours," during which campers can't use gas generators because of their noise pollution, the Solo Generator 2000 skirts this problem entirely.

Jackery has also taken several safety measures to prevent the Solo Generator 2000 Pro from overheating or malfunctioning. The battery pack has four lithium battery temperature detectors and a pair of chips that continuously monitor its performance. The company developed its own battery management system as a further precaution.

You can recharge the Solo Generator 2000 Pro by plugging it into an AC adapter, but Jackery has a far more eco-friendly solution when you need to top it up: The SolarSaga 200W solar panel.

True to its name, the SolarSaga 200W solar panel can generate up to 200 watts of solar energy under the ideal conditions. Its power output is dependent on the strength of the sun, and the angle at which it's placed. Six of these panels can be daisy chained together and connected to Solo Generator 2000 Pro, which can fully recharge its battery in two and a half hours under ideal conditions. For reference, the Solo Generator 2000 Pro can be recharged in two hours when plugged into a wall, so using solar panel is almost as efficient.

Jackery's Solo Generator Pro bundle helps to usher in a new wave of high-performance solar-powered battery packs, and shows just how far the company had come since 2015, when it announced its first-generation battery. Jackery added solar panels to its portfolio in 2020, and has come a long way in a relatively short period of time.

The Solo Generator Pro is now available at major retailers, including The Home Depot, Amazon, and directly from Jackery.