Is This Why Whale Populations Haven’t Recovered After Hunt Ban? 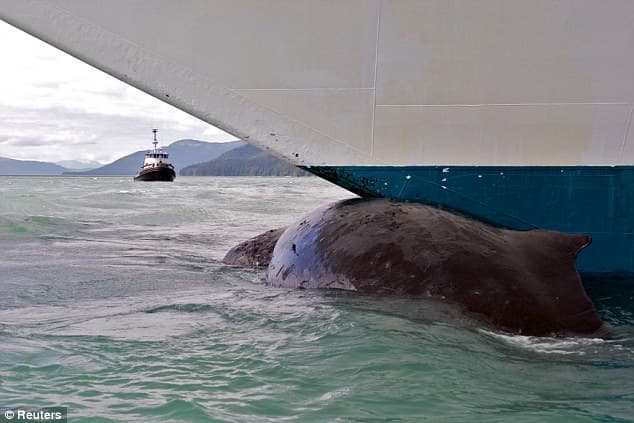 When commercial whaling was banned in 1986 it put an end to a harvest that threatened the existence of some of the most majestic animals on Earth. With several species reduced to tiny fractions of their original populations, once the moratorium was introduced the expectation was that whale populations would recover. But in the decades since, only some have.

There are many possible reasons why this might be, including chemical pollution, climate change, man-made noise, and loss of cultural knowledge among whales that prevent their descendants returning to habitats in their former range. A further risk, highlighted by a new study of blue whales off the coast of California, is deaths and injury caused by being struck by ships. In most populations, we don’t yet know how big a problem it is, but for some it is almost certainly holding back recovery.

In recent years reports of the arrival of large vessels into port with the carcass of a large whale pinned to the bow bulb have become a regular occurrence in the news. Of course, these are only those cases that make it to port – an unknown number of strikes leave their victims at sea, and are sometimes encountered by chance.

In fact the impact on the vessel is so insignificant that the crew is typically unaware that it has happened until it reaches port. But why this apparent increase in numbers? Is there just more interest, or are there now more whales to hit, are newer ships somehow more dangerous (modern, more efficient technology is often quieter), or are the whales moving into more dangerous busy shipping lanes? We don’t know, which is why studies like one published in the journal PLoS One are so important.

Oregon State University researcher Ladd Irvine and his colleagues attached satellite tags to 171 blue whales over a period of 15 years starting in 1993. For a study of whales this is a huge dataset representing a massive investment, largely in terms of researcher time, and provides a really robust insight into the whale’s habitat use.

They found two core areas heavily used by the whales, in the Gulf of the Farralones off San Francisco Bay, and north of the Channel Islands, near Los Angeles. The whales' presence there wasn’t year-round, but heavily concentrated between July and October as they followed high concentrations of their food, krill, that accumulate after the spring plankton bloom in these productive waters. Some individuals returned to the same spots at the same times over many years, suggesting the whales relied on their knowledge and sense of location rather than an ability to track prey, highlighting the important role that habitat knowledge plays in these animals’ lives.

By plotting the whale distribution maps against those of heavily-used shipping lanes along the California coast, the problem is clear. The shipping lanes run through some of the areas most heavily used by the whales, putting them at high risk of ship strikes. The shipping lanes are typically placed where they are heavily used and most economical, such as the shortest distance between two points. No shipping companies would change their routes and incur costs without solid evidence of a problem, and this is exactly the kind of evidence this study provides.

It’s hard to comprehend in an age when we are mapping the surface of Mars just how ignorant we are about these huge ocean creatures. How do you figure out how many blue whales there are in the deeply inhospitable Southern Ocean? Sometimes technology can help, such as the satellite tags used for this study. Shipping lanes into Boston on the eastern US seaboard are now equipped with acoustic buoys that report detections of critically endangered right whales in near real-time, hopefully reducing significant numbers of deaths from ship strikes.

Of course, we could find out more – it just takes money. The constraint is economic and political, not a lack of technology or ingenuity. Scientists are accumulating evidence that might help us appreciate just how much healthy whale populations could be doing for us. As large, apex predators they structure the ecosystems in which they live, they provide ecosystem services by recycling nutrients throughout the water column, and their huge carcasses fuel entire deep-sea ecosystems for years. Even their excrement plays a vital role in fertilising nutrient-poor surface waters, seeding the seas with iron, which boosts phytoplankton growth and potentially plays a part in the dynamics of climate change.

It seems that marine habitats with healthy whale populations might actually be more productive than ones without. It’s never made more sense to invest in saving the whales.

Luke Rendell receives funding from the Marine Alliance for Science and Technology Scotland (masts.ac.uk), and the Leverhulme Trust.  This article was originally published on The Conversation. Read the original article.