How Humans Might Outlive Earth, the Sun, and Even the Universe Itself

"We're being naïve when we think of life only in terms of Earthlike planets and carbon-based life." 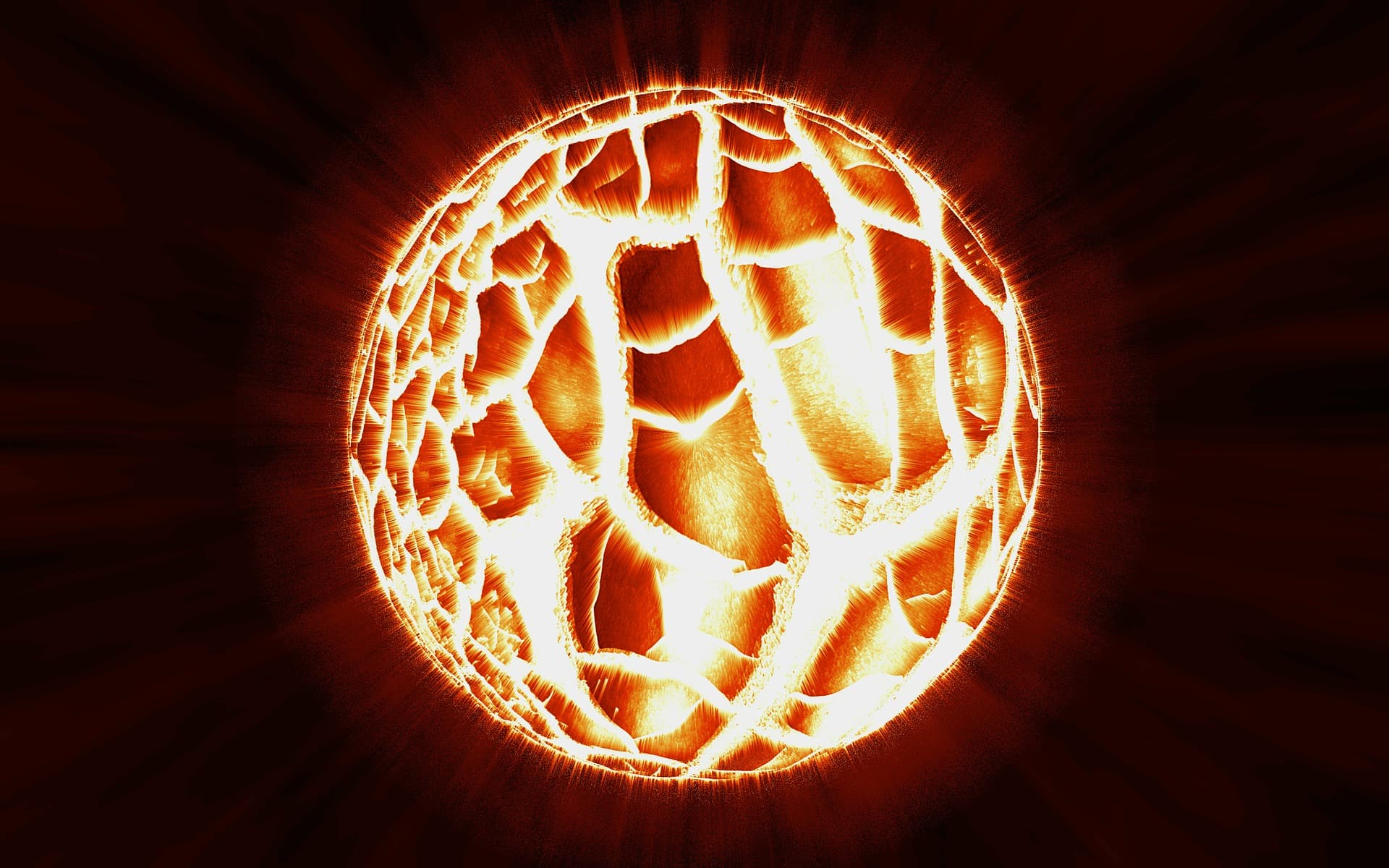 Nuclear war. Runaway climate change. A global pandemic. Today our world faces all manner of existential threats. But scary possibilities like these are nothing compared to what astronomers say lies in store for Earth. Our planet’s ultimate destiny is to be baked, blasted, and eventually disintegrated.

There’s nothing we can do to prevent this cataclysm. Yet according to scientists who study the far future, including University of California astronomer Gregory Laughlin, the prospect for life is, oddly, rather bright. Given technological advances and the continuing evolution of our species, humans should be able to survive — in some form — long after Earth has ceased to exist.

But our distant descendants are going to have to do some planet-hopping.

The first major cosmic crisis will strike in about 1.5 billion years. At that point, according to projections by environmental scientist Andrew J. Rushby at the University of East Anglia in England, the brightening sun will set off what might be termed “super-global” warming. Earth will be heated until the oceans boil.

By then, though, will we care? We already have the technology to establish bases on the moon and Mars. So a billion and a half years from now, we’ll likely have colonized the whole solar system — and perhaps other star systems in our Milky Way galaxy.

As the sun grows hotter, other planets will become more appealing. Just as Earth becomes too toasty to sustain life, Mars will reach a temperature that makes it habitable. Cornell University astronomer Lisa Kaltenegger has run models showing that the Red Planet could then stay pleasant for another 5 billion years.

About 7.5 billion years from now, the sun will exhaust its hydrogen fuel and switch to helium. That will cause it to balloon into an enormous red giant. Mars as well as Earth will be fried. On the other hand, the once icy moons of Jupiter and Saturn will have become tropical water worlds — prime real estate for human colonies. We could live there for a few hundred million years.

About 8 billion years from now, the flaring sun will make conditions intolerably hot all the way out past Pluto. “The exact dates depend on how much mass you estimate the sun will lose and how much planets will move,” Kaltenegger says. But the message is clear: Life will be impossible in our solar system.

Fortunately, Laughlin points out, there are 200 billion other stars in the Milky Way, most with planets of their own. Perhaps our descendants will have mastered near-light-speed travel. Even with current technology, however, interstellar travel is conceivable on the kind of timescales we’re talking about.

The fastest spacecraft built to date, Voyager 1, is racing away from the sun at 38,027 miles per hour. At that speed, it would take 70,000 years to reach the nearest star. But future humans might build interstellar arks, giant ships on which generations of travelers would live and die before delivering colonists to a new destination. Such star-hopping colonists could spread across our entire galaxy before Earth overheats, even assuming no advances in rocketry.

At first, those voyagers might choose to set sail for planets around midsize, yellow stars similar to our own. That will take care of us for quite a while, since sunlike stars last 12 billion years before they fizzle. As one star ages and dies, we can move on to the next. We’ve got time.

Fifty billion to 100 billion years from now, though, all of the raw material for new stars will be used up. The last generation of sunlike stars will burn out, and humans will need a new kind of place to live.

It turns out that we have better options than yellow stars like our sun. The Milky Way is dotted with red dwarfs, cooler and dimmer than our sun but built to last. “For the next 10 trillion years, the red dwarfs are just coming into their own,” Laughlin says.

And so planets around red dwarf stars may be our homes until about 15 trillion years from now, when they too will expire.

Red dwarfs will be the last generation of stars. Once they die, the universe will go dark — literally. Even so, Laughlin doesn’t see this as the end of the line for life. Instead, we will enter what he calls “the gravitational era.”

In this dark future, we might build enormous space power plants around black holes, lowering masses toward them to harvest their gravitational pull “like the weights pulling down in a grandfather’s clock,” says Princeton physicist J. Richard Gott. Or we might tap the internal heat of planets to generate energy: The gravitational interaction between celestial bodies creates friction, which can keep planets hot inside even without any starshine.

Don’t picture cave dwellers huddling around geothermal heaters. Trillions of years of evolution will have long since transformed us, Laughlin says. Perhaps we will have merged with our computers. Perhaps we won’t even have a physical form. The only thing our descendants will definitely have in common with us is the essential spark of life: not flesh and blood necessarily but information.

“That’s the most important lesson from thinking about the far future universe,” Laughlin says. “We’re being naïve when we think of life only in terms of Earthlike planets and carbon-based life.”

Information-based life can keep going almost forever. The gravitational era that begins around 15 trillion years from now could continue for quintillion years and beyond, Laughlin estimates. A quintillion is a 1 followed by 18 zeroes. It is trillion times as long as the entire history of our hominid line on Earth.

Will the Universe Die Before We Do?

Still, even this near-eternity is not the same as eternity. At some point, life runs into the physical limits of matter itself.

Physics theories suggest that sometime between 10^34 (1 decillion) and 10^64 (1 vigintillion) years from now, the protons found in the nuclei of all atoms will decay. That means black holes will be the only organized form of matter in the universe. Future humanity can’t have any physical form at this point.

At 10^100 years — 10 duotrigintillion years A.D. — even black holes will evaporate. There will be no energy or structures of any kind — just a cold, eternal mist of farflung particles. This really is the end point for life.

Or maybe not. Paul Steinhardt of Princeton University, one of the founders of modern cosmological theory, is exploring a model in which the universe goes through endless cycles of creation. His latest version, developed with Anna Ijjas of Columbia University, suggests that the universe could experience a new Big Bang well before the final black hole apocalypse.

If it does come, a new Big Bang would wipe away all traces of this universe — unless we can find a way to leapfrog into the next cosmic cycle. Current physics offers no guidance here.

Then again, we have quite a while to ponder the problem.

Read This Next
The Other White Meat
Space Colonists Will Likely Resort to Cannibalism, Scientist Says
Futurism
Why Are We Going to the Moon, Again? Oh Right, to Make It a "Gas Station for Outer Space"
Futurism
New Discovery Raises Hope for Human Colonization of the Moon
Futurism
Life Can Survive on Mars Far, Far Longer Than We Thought
Futurism
More Study Is Needed on Reproduction in Space If We Want to Colonize Mars
More on Off World
Cat and Mouse
3:38 PM on the byte
SpaceX to Launch "Hunter" Satellites for Targeting Rival Spacecraft
Space In Space
1:44 PM on the byte
NASA Official Admits There's a Bit of an Issue on the Space Station
No More Hops, Mor...
Yesterday on the byte
Suggestion: NASA Should Make Its Mars Helicopter Do Some Gnarly Tricks From "Tony Hawk"
READ MORE STORIES ABOUT / Off World
Keep up.
Subscribe to our daily newsletter to keep in touch with the subjects shaping our future.
+Social+Newsletter
TopicsAbout UsContact Us
Copyright ©, Camden Media Inc All Rights Reserved. See our User Agreement, Privacy Policy and Data Use Policy. The material on this site may not be reproduced, distributed, transmitted, cached or otherwise used, except with prior written permission of Futurism. Articles may contain affiliate links which enable us to share in the revenue of any purchases made.
Fonts by Typekit and Monotype.