The discovery could help us understand more about dwarf planets in our Solar System. 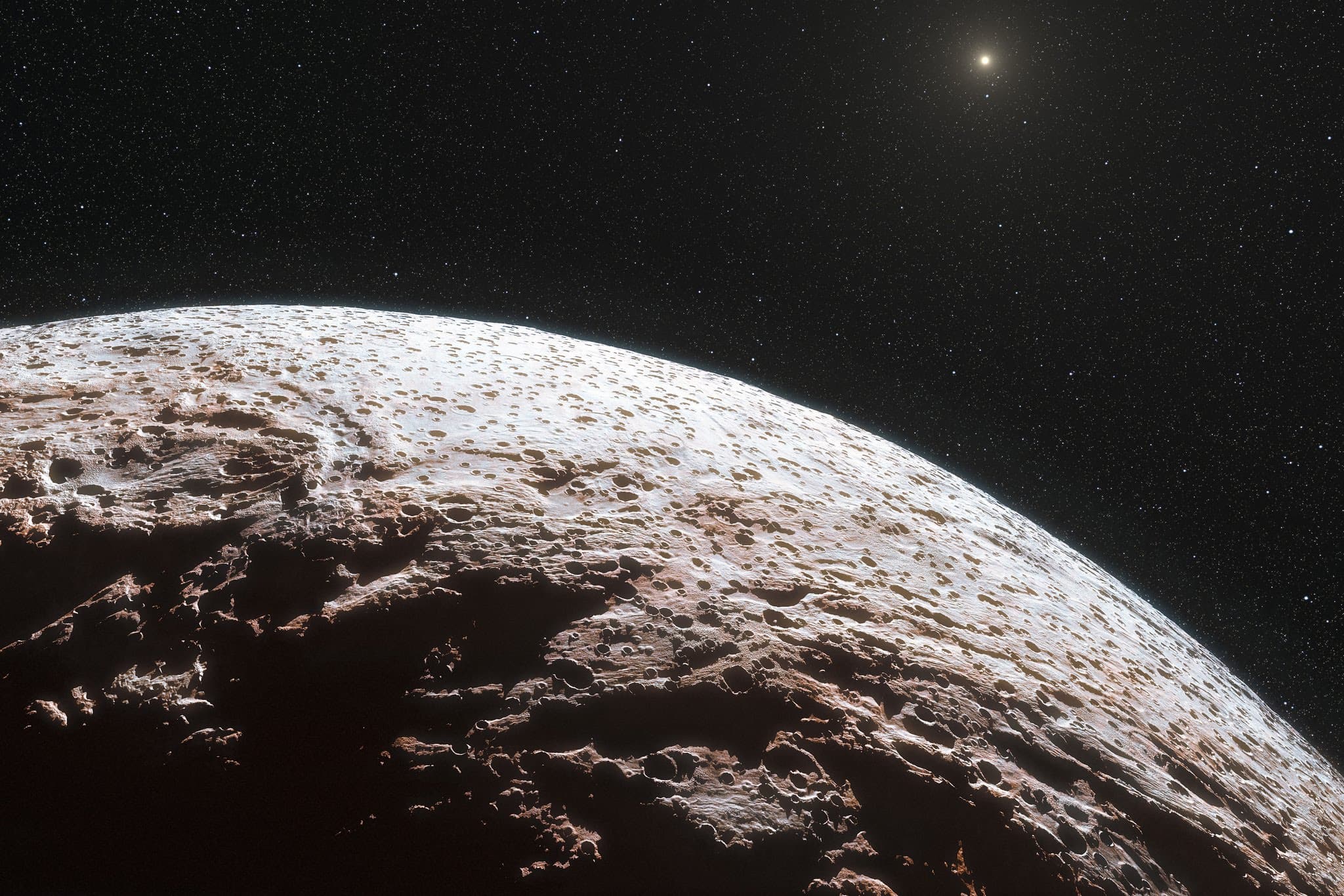 While scientists continue to make new discoveries about our ninth planet, Pluto, relatively less is known about other dwarf planets. A team from Southwest Research Institute (SwRI) are looking to change that. The team has discovered a dark moon orbiting previously-moonless dwarf planet. Makemake is one of the “big four” dwarf planets populating the Kuiper Belt region at the edge of our solar system.

Detailed in a paper published in Astrophysical Journal Letters, the team used data from Hubble’s Wide Field Camera 3 and spotted a faint point of light near the dwarf planet . From there the team discovered the natural satellite, which they dubbed MK2. The moon had a dark surface and is 1,300 times fainter than Makemake.

Up until now, MK2 was hidden by "a nearly edge-on orbital configuration." In other words, the moon was difficult to see through the glare of the planet. The discovery of MK2 means that all four of the currently designated dwarf planets have at least one satellite. The discovery could point to the possibility of other large Kuiper Belt Objects (KBOs) being host to hidden moons. “Makemake’s moon proves that there are still wild things waiting to be discovered, even in places people have already looked,” said Dr. Alex Parker, lead author of the paper, in a statement.

One Discovery Leads to Others

The previous lack of knowledge of Makemake's satellite suggested that it had escaped a past giant impact. Now, astronomers are looking to study whether MK2 is the result of a giant collision, or if it was captured by the planet's gravity.

A satellite orbiting Makemake is a key discovery in helping to learn more about the dwarf planet itself.  “With a moon, we can calculate Makemake’s mass and density,” Parker said. “We can contrast the orbits and properties of the parent dwarf and its moon, to understand the origin and history of the system. We can compare Makemake and its moon to other systems, and broaden our understanding of the processes that shaped the evolution of our solar system.”

Read This Next
Nightmare Fuel
This Horror Story About the Webb Telescope Will Chill Your Bones
Kuiper Belt Objects
Astronomers Find Rare, Distant Space Object With $3,000 Telescope
Star Light
Ultra-Detailed New Image of Nearby Galaxy Shows Stars Being Born
Big Bang Time Machine
Here's NASA's Newly-Released Image of Ultima Thule
Ultima Thule
New Horizons Will Fly Past the Most Distant Object We've Ever Visited
More on Off World
Take Cover
Yesterday on the byte
Space Startup Blows Up Another Giant Inflatable Space Station Module
Rock Blast
Yesterday on the byte
Scientists Say There's an Upside to Those Rocks That Keep Bludgeoning the James Webb
Meathead Theory
Yesterday on the byte
Professor Receives Insane Email Claiming "Biological" Green Comet Is Giving Off "Meat Smoke"
READ MORE STORIES ABOUT / Off World
Keep up.
Subscribe to our daily newsletter to keep in touch with the subjects shaping our future.
+Social+Newsletter
TopicsAbout UsContact Us
Copyright ©, Camden Media Inc All Rights Reserved. See our User Agreement, Privacy Policy and Data Use Policy. The material on this site may not be reproduced, distributed, transmitted, cached or otherwise used, except with prior written permission of Futurism. Articles may contain affiliate links which enable us to share in the revenue of any purchases made.
Fonts by Typekit and Monotype.