How Much Does Thor's Hammer Weigh? What Happens if You Drop It? 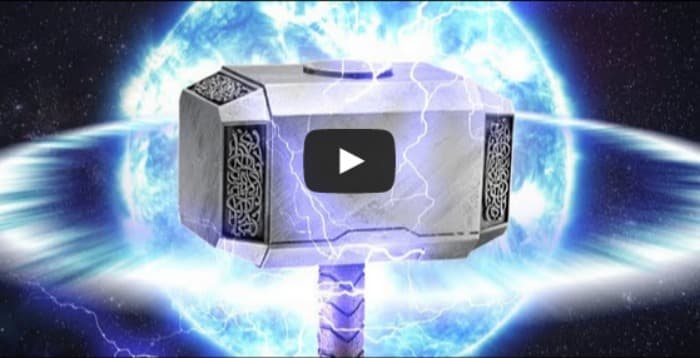 According to Norse mythology, the god Thor (who we all know from the Marvel comics and recent Avengers movies) wielded a hammer named Mjölnir. As is true of all myths, Thor’s story is rather convoluted, as is the story of his hammer. You won't find a nice, straightforward text that explains this god or the weapon that he wields. Rather, the texts are contradictory and a bit confused.

For example, some claims assert that Thor’s hammer was forged in the core of a dying star (note: it wasn't forged of the core of a dying star, just in one). And the comic claim that Mjölnir is made out of Uru, a metal that only comes from Asgard. Make-believe metal is kind of hard to weigh. But then, in 1991, Marvel released a "Thor's Hammer" trading card that claims that Mjolnir weighs precisely 42.3 pounds. Yet, using the dimensions and weight on Marvel's trading card, it's estimated that the density of Mjolnir is about 2.13 grams per cubic centimeter. That makes it even lighter than aluminum.

Hm. The problems continue to mount.

Similarly, it is said that only the worthy may posses the power of Thor and pick up the hammer. However, is it Odin’s enchantment that prevents others from using Thor’s hammer, or is the material that Mjölnir is composed of too heavy to lift without god-like strength? A mix of both?

In the end, talking about the weight of the hammer and forming any solid opinions is a big difficult. But here, Vsauce does an awesome job exploring the science behind the weight of Mjölnir.