How Fast Does the Earth Move as it Orbits the Sun? 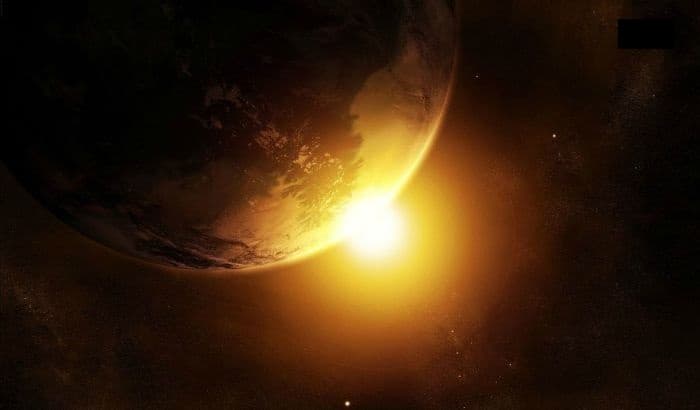 It may not seem like it to us, but our planet is moving at incredible speeds. In fact, every hour, our planet moves approximately 67,000 miles  (or 107,000) in its orbit around the Sun. But how do we know this? After all, it's not like there is a great cosmic radar that we can look at in order to clock our speed.

It may seem like a rather difficult question to answer, but really, it only requires a little knowledge of geometry.

To begin with, we know that the Earth completes one orbit every 365 days. Well, technically, a year is just a little longer than this. In truth, a years is actually 365.25 days long. That's why, every four years, we have an extra day (we're playing a bit of catchup with those quarter days). But in order to make things simple, let's just round down to a nice 365.

We also know that our planet is about 93 million miles from the Sun (some 150 million km) from the Sun, and that it travels in a near-circular orbit.

Technically, the Earth has an elliptical orbit. But this really doesn't change things too much. You see, eccentricity (how much something varies from a perfect circle) is measured according to a scale that ranges from 0 to 1. And in this case, 0 is a circle and 1 is a very stretched out ellipse. The Earth has an eccentricity of  just 0.016.

This is almost a circular orbit, so to make things easier on ourselves, let's just say that it actually is a perfect circle.

And if you remember your geometry, to figure out the circumference of a circle, you use  π  X the diameter of the circle.  Since π goes on for infinity, it gets rounded to 3.14

That gives us the distance of the circular path that the Earth follows as it travels around the Sun. So we now know that our planet travels about 585 million miles each time that it completes an orbit. This equals out to just about 942 million km every year.

In order to know how far the planet travels each day, we just divide the previous solution by the number of days in a year (365).

To make the figures even more meaningful, divide that by the number of hours in a day (24).