Here's what her allies are saying — and her foes' the most brutal zingers. 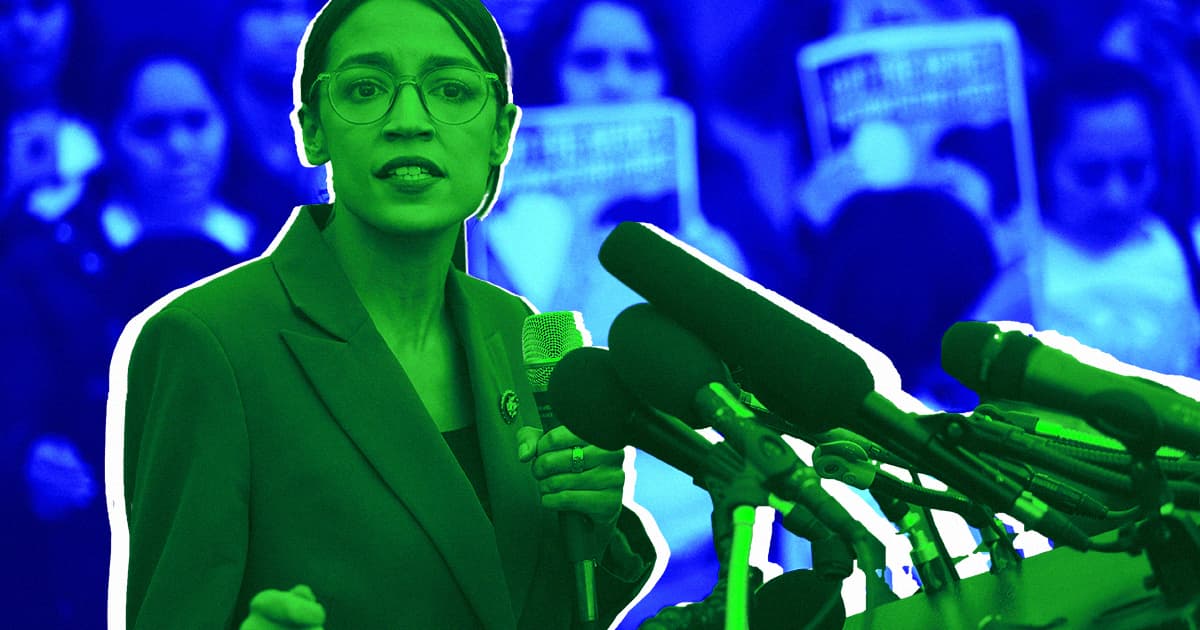 Yesterday, the left wing of the U.S. Democratic party unveiled the "Green New Deal," a broad-spectrum plan to fight climate change that would radically reshape the future of energy policy and infrastructure in the United States.

The plan — and its champion, the newly elected U.S. Representative from New York Alexandria Ocasio-Cortez — immediately drew strong reactions from across the political spectrum. Here's our roundup of the burns, the boosts, and the friendly fire.

• Wall Street Journal columnist Kimberley Strassel blasted the deal, writing on Twitter that if "a bunch of GOPers plotted to forge a fake Democratic bill showing how bonkers the party is, they could not have done a better job."

• National Republican Congressional Committee spokesman Bob Salera also didn't pull any punches, telling the New York Times that the "socialist Democrats are off to a great start with the roll out of their ridiculous Green New Deal today!"

• "One of the proposals in the 'Green New Deal' is to build high-speed train lines so flying is less necessary," NC State astrophysicist Katie Mack tweeted. "This is not a radical proposal. In Japan, the Shinkansen covers distance approx LA-San Francisco in 2.5 hrs. At peak, trains every 10 minutes. The line was built in 1964."

• "It is a breath of fresh air to see leaders in Congress discussing climate solutions that rise to the scale of the challenge," Aliya Haq, the federal policy director for the Climate & Clean Energy Program, said in a statement. "America must move as quickly as possible to a 100% clean energy economy to end climate pollution, create millions of high-quality American jobs, reduce inequality and poverty, and safeguard communities from climate damages and environmental hazards."

• "Climate change is an existential disaster facing the entire world," U.S. Senator Bernie Sanders tweeted. "We must transform our energy system away from fossil fuels to energy efficiency and sustainable energy. A Green New Deal can save the planet and create millions of new jobs."

• House Speaker Nancy Pelosi might be in the same party as Ocasio-Cortez, but she quipped to Politico that the "green dream or whatever they call it" was just one of "several or maybe many suggestions that we receive" — a jab that CNN called "serious shade."

• Obama administration Energy Secretary Ernest Moniz piled on. "I'm afraid I just cannot see how we could possibly go to zero carbon in a 10-year time frame," he told NPR.

• Others said the plan didn't go far enough. "By failing to expressly call for an end of the fossil fuel era, the resolution misses an opportunity to define the scope of the challenge," Friends of the Earth President Ericha Pica told Bloomberg.

Read This Next
Good Neighbors
German Government Says It May Keep Nuclear Plant Open After All
Back Online
Japan May Need Nine Nuclear Reactors Turned On to Get Through Winter
Piercing The Hype
If Graphene Batteries Do Everything Scientists Say, They Could Be a Gamechanger
New Light
Trump Admin. Hid Climate Reports Warning of New Dangers
Getting Warmer
Scientists Set New Temperature Record for Superconductivity
More on Earth & Energy
Dishonorable Disc...
Yesterday on the byte
Scientists Alarmed by Video of Deep Sea Mining Company Spewing Waste Into Ocean
Save Yourselves
Feb 5 on the byte
Furious Marsupial So Thirsty For Sex That It’s Dying, Scientists Warn
Stem Ware
Feb 3 on the byte
Scientists Discover World's Oldest Preserved Vertebrate Brain
READ MORE STORIES ABOUT / Earth & Energy
Keep up.
Subscribe to our daily newsletter to keep in touch with the subjects shaping our future.
+Social+Newsletter
TopicsAbout UsContact Us
Copyright ©, Camden Media Inc All Rights Reserved. See our User Agreement, Privacy Policy and Data Use Policy. The material on this site may not be reproduced, distributed, transmitted, cached or otherwise used, except with prior written permission of Futurism. Articles may contain affiliate links which enable us to share in the revenue of any purchases made.
Fonts by Typekit and Monotype.