This Grad Student Used a Neural Network to Write His Papers 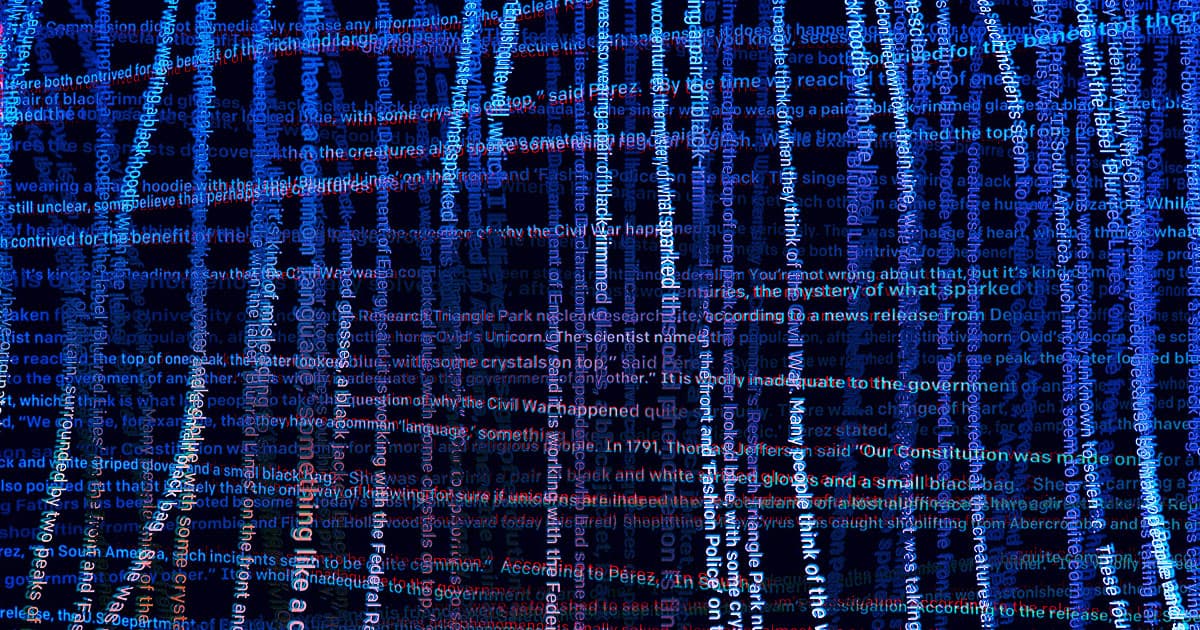 Back when artificial intelligence development company OpenAI created the text-writing algorithm GPT-2, it initially said it was too dangerous to release into the world.

Of course, it eventually did did release a full version of the neural network. By and large, it turned out that people were more interested in using GPT-2 as an AI dungeon master than churning out the endless torrent of fake news and propaganda that OpenAI had worried about.

But one evil genius slipped through the cracks: Tiago, a student who's getting his master's degree in business, told Futurism that he been using GPT-2 to write essays for his coursework.

He was willing to share his story — and copies of his AI-generated essays — on the condition that Futurism didn't share identifying information beyond his first name.

"I don't know if it qualifies as plagiarism," Tiago told Futurism. "I figure no, maybe, but that's not a gamble I'd like to take right now."

Below is Futurism's conversation with Tiago, which has been lightly edited for clarity.

So, you used the AI algorithm GPT-2 to write one of your homework assignments. I have to say, that's an incredible move to pull off.

Tiago: Well, not that amazing. I would say, all my friends that work in tech and the STEM fields don't understand how poor the business school curriculum is in general. It's not as much a feat for GPT-2, I'd say, as proof of the poorness of business school's curriculum.

You couldn't write an essay on science that could be anywhere near as convincing using the methods that I used. Many of the courses that I take in business school wouldn't make it possible as well. However, some particular courses are less information-dense, and so if you can manage to write a few pages with some kind of structure and some kind of argument, you can get through. It's not that great of an achievement, I would say, for GPT-2.

What was the actual assignment?

It could be "how innovation is important" or something like that. You can take any conclusion that you want, and if it makes sense and if it fits in the more general narrative, you are assured a passing grade. It's very far from publishing an academic essay — I'd like to stress that point.

What gave you the idea to use GPT-2 for this assignment in particular?

I read an article about a student contest for essays on climate change. One of the entries was not a student, but a journalist at The Economist who used GPT-2 to write an entry. It was a very close experiment to my essay.

At that point, I started looking up how I could use GPT-2 to write essays in some of my classes. However, I do not have a technical background at all, so it was too much for me.

One thing that was made available between that time and the essay that I wrote was a tool, Talktotransformer.com, which makes GPT-2 accessible to everyone through a web browser. I don't know the details, but that's what made it possible for someone with a non-technical background like me to use GPT-2 to write my essay.

How did you actually write the essay? Did you have a game plan going in, or did you basically put some writing into TalkToTransformer and hope for the best?

Basically, I wrote the outline of my essay, with a few sentences or a paragraph per section, each with a point. And then I fed the first sentence of each paragraph that I wrote, fed it to GPT-2, and I got a full paragraph.

I had to iterate a few times to get something that was close to what I was looking for, and then I put it back in my word document and went to my next paragraph.

So you provided one sentence per paragraph, sort of like a topic sentence, and let the algorithm fill it out?

I wrote the structure and one sentence per paragraph. All the information that was in that final essay was in that structure, but the sentences were added by GPT-2. It added false quotes sometimes, or false information about the companies I was talking about. I found adding words like "innovation," "synergy," and stuff like that made the essay sound more suited for the course.

I did it for two essays in two different courses. What I figured as I was doing it was that if I write my first sentence in a certain way, it increases the probability that the paragraph will look how I want it to. So, if I use the words that are in a lot of business review articles, then the probability of similar words and similar points being made in the generated paragraph was increased.

What did you think of the output? Did it seem believable to you? Did you have to fix any errors?

Some sentences would generate paragraphs in different tones. So, for instance, if I used some keywords, it would write a quote from the Starbucks CEO like what he would say in a shareholders meeting. But if I wrote it slightly differently, it might produce something about how to make coffee.

So you didn't change the paragraph at all once it looked about right?

There was light editing. Removing a sentence from a paragraph or adding it elsewhere. Sometimes GPT-2 would start a quote without ending it, so I would have to remove it.

Or it would make some bold claims that I was not comfortable with because they were factually false. Those I would remove.

And how was it received? Did the paper get a passing grade?

Both times I passed. But there was not much feedback on one of them, just a grade. And the second one, there was a grade on relationship to the subject, whether it got the point across.

It did get an okay grade. I don't have the grades for other students, but I think 80 percent of the class passed. It's hard to tell. I passed and some students didn't, but I was far from the best. I was clearly one of the worst ones that did pass.

It was okay for me because I'm at the end of my masters and this was one of my last classes. For me, it was just pass or fail.

Were you nervous at all when you were submitting the work? Were you concerned that you'd be found out?

I was confident enough to turn it in. However, I then was looking online and found out there's a really easy way to find out if an essay was written by GPT-2. It's to feed it to GPT-2 and if it's able to predict the next words, then it was written by the AI. It's easier to find out than normal plagiarism.

I knew that the business school had software that they were using to look out for plagiarism in all the essays that are turned in to their online platform, which is how I turned in my essays. So I was slightly worried that the company that sold them the anti-plagiarism software would have made an update.

I don't think the professors even considered the possibility of GPT-2 writing the essays, but I was slightly worried that the company making the software added a module. But not that much.

Were you surprised when you passed?

Not really. I think it's hard to get across to people who didn't study in business school how poor the standards are for essays that are turned in. I think the professors are too proud to think of the possibility of AI writing an essay. But it was really easy to do.

I think it will become an issue for business schools in the future, and unfortunately for students, it's easily solved through anti-plagiarism software.

I know you're basically done with school. But if you had more ahead of you, would you do this again? Or was it more of a fun experiment for you?

Yeah, this is something I'd do again. You just can't expect a good grade. The final essay is pretty poor, it's just not poor enough for the professor to fail you.

More on GPT-2: Now You Can Experiment With OpenAI’s “Dangerous” Fake News AI