Get Ready. Elon Musk Says a Tesla Update is Coming in 10 Days.

Tesla is moving toward full autonomy, one update at a time.

2017 has already been a busy year for Tesla, which has been focused on bringing its latest Autopilot system to parity with the features of its first generation system. Earlier this year, the company began rolling out an enhanced version of its Autopilot software. That version include a number of new features, such as traffic aware cruise control, a forward collision warning, and an Autosteer beta version.

Now, Tesla CEO Elon Musk has revealed in a tweet that the long-awaited Update 8.1, which promises to be the next big step for all Tesla owners, will be available in “10 days or so.” Musk added that the 8.1 update is dependent on the improvements made with Autopilot 2.0 — “full speed autosteer test results,” to be exact. 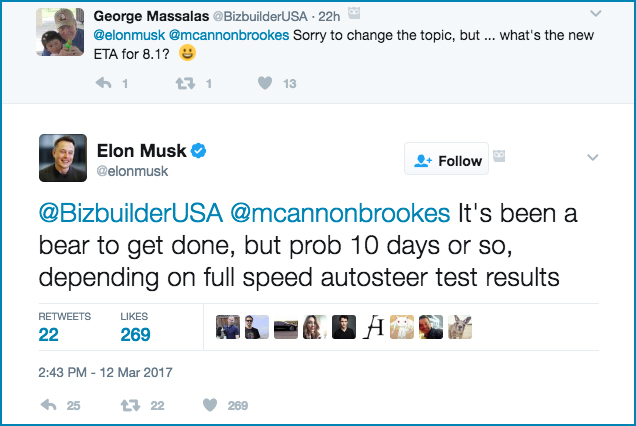 Tesla has recently been pushing for updates on vehicles that are equipped with its advanced Hardware 2 platform, and all these updates are geared toward making Tesla’s vehicles capable of fully autonomous driving, which the company hopes to achieve by the end of 2017. Version 17.7.2 of its Autopilot firmware was released last month, and it introduced autonomous parallel parking. Two weeks ago, the company rolled out Version 17.9.3, which raised the speed limit for autonomous driving on undivided roads from approximately 80 to 88 km/h (50 to 55 mph).

Previously, it was believed that 8.1’s updates would just be Autopilot 2.0 improvements geared toward first generation parity. However, many of those updates have been pushed in iterations of 8.0. So, what can be expected from 8.1?

Some believe that it could contain the full-speed update lacking in Version 17.9.3. However, Tesla is still attempting to make those features work safely via its very own image processing system, Tesla-Vision. Other possible updates included in 8.1 would be the new Linux kernel as an upgrade to Tesla’s operating system. That would introduce several improvements to the UI of the control hub of Tesla vehicles — the 17-inch touchscreen in the central consoles of its Model S and Model X cars. It would also introduce a more usable internet browser.

Whatever 8.1 has to offer, it’s sure to continue moving Tesla (and the rest of the world) forward on the path to a future of fully autonomous transportation.

Tesla Is Now Worth More Than ExxonMobil