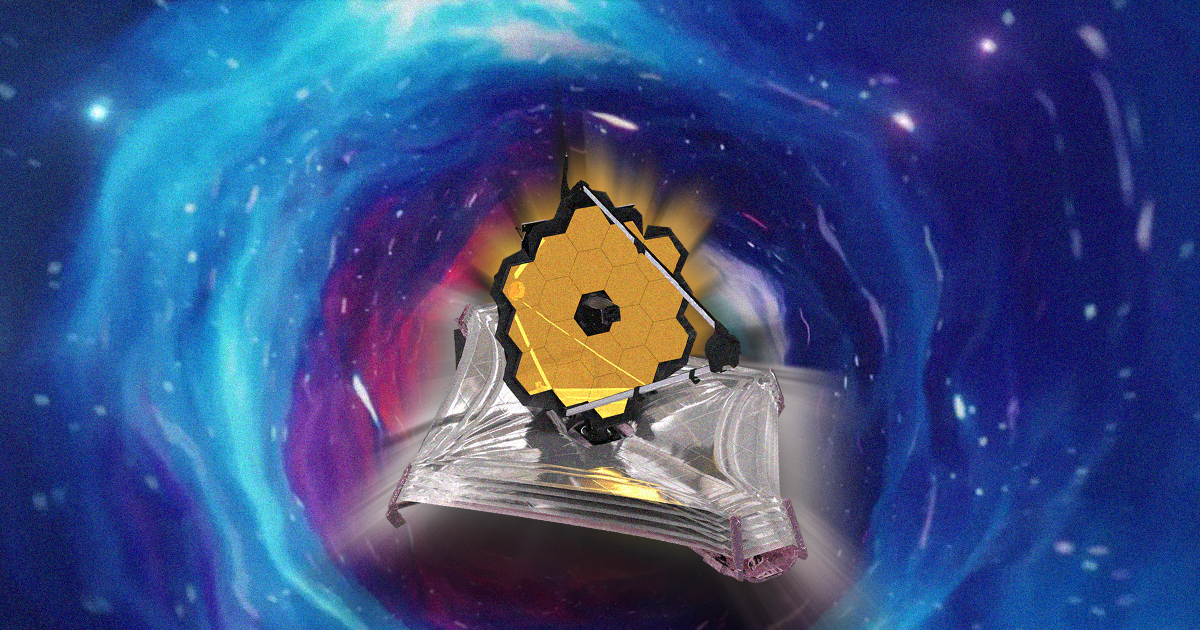 UC Santa Cruz astronomer Garth Illingworth, former Deputy Director of the Space Telescope Science Institute, has had a hell of a career.

While most of us look at those JWST pictures and just see pictures, Illingworth and his peers see all that and more: data. Over its few operational months, Webb has already offered an illuminating breadth of information — findings that have confirmed, confounded, and even contradicted existing theories about the cosmos. Curious about what that data means ourselves, we caught up with Illingworth to talk about space telescopes, far away worlds, and the ever evolving scientific process.

This interview has been edited and condensed for length and clarity.

Futurism: Your work has been extensive. Can you tell us a bit about your research and where it's taken you?

Garth Illingworth: Sure, I'll give you the scientific framework. I'm an astronomer, and my key interests have been the early galaxies in the universe. Basically, we live 13.8 billion years after the Big Bang in a great, wonderful spiral galaxy, the Milky Way. But we had to get to this point.

The very beginnings have intrigued me for a long time, ever since I saw the Hubble Deep Field back in 1995 — the first deep Hubble image of a blank part of the sky, which turned out not to be blank, but just absolutely packed with galaxies. That's what I've been working on for 25 or so years. Actually, back in the 80s, when I first started thinking about Webb, we hadn't even launched Hubble. Riccardo Giacconi, the director of the Space Telescope Science Institute at that time, said to me: "You guys really need to work on the next big telescope. Trust me, it's gonna take a long time."

We had to do a rather interesting thing at that point. We had to project forward, even when we didn't know what Hubble was going to discover. We realized that we should go to longer wavelengths, we should really go into the infrared — we felt there were so many ways in which that could reveal aspects of the universe that Hubble would never reveal. It had to be a big telescope to work in the infrared. It had to be really cold, which meant it needs to be a long way from here. When we look back at the drawings now, these very simple-minded drawings, it's completely different from Webb, but in fact Webb operates and has the characteristics we thought of then. It's a big telescope, it's infrared, it's really cold, it's a hell of a long way away from us [laughs].

Correct me if I'm wrong, but you and your team discovered what's believed to be the most distant and earliest galaxy that humans have yet seen, dating back to about 400 million years after the Big Bang.

Yes. So, about seven or eight years ago, using Hubble, we amazingly found an object that was about 400 million, 450 million years after the Big Bang. I think if you'd asked me 10 years ago whether Hubble would have done that, I would have said no way. But it turned out that right at the limits of Hubble, we were able to find this early galaxy, and we could actually see it with the Spitzer Space Telescope — we could show there was a fuzzy blob there. That sat around as a real enigma for, like, seven years. We couldn't learn much about it, but it pointed to a very interesting change in the way galaxies were building up at early times. So the moment Webb got operational, the big question was: is this object unique? Or are there lots of others like that?

Within four days of the Webb data being released in early-to-mid July, we already had a paper submitted to the preprint server. Actually, there were two groups to do it the same day, saying that we've discovered a couple of other objects like that one, and one of them was even further away. This was the sort of step that we had hoped that Webb would do — that it would expand our horizons into earlier times, and it did that incredibly quickly and very well.

I think that goes back to the point about working on getting Hubble into space, but already thinking about the next thing. Now, it seems like the James Webb is happening very quickly — but it's because there's already such a large scientific foundation.

Yeah, exactly. In the late 1990s, after the Hubble Deep Field came out, the goal of finding the first galaxies became the central goal for Webb. But right around that time, we discovered the first exoplanets. Dark energy was being discussed, and dark matter. There were so many things that Hubble was finding that we knew Webb would make a difference on — we just ended up having to wait 23 years.

In July, when the first images were released, we had an hour where we were all seeing them for the first time. I was sitting in the same auditorium at Space Telescope where we had held the first meeting 33 years ago. It was a bit bizarre sitting there, looking around going God, this room looks pretty much the same as when we first talked about Webb, and here we're now seeing the first images coming in. And they're absolutely amazing.

One particularly juicy takeaway from the James Webb is that some new data appears to contradict previous findings. Can you tell us more about that early galaxy that was a lot more massive than previously expected?

Yes, sure. So this one, which we gave the name GNZ11 — not a very imaginative name, but astronomers are pretty boring when it comes to naming objects [laughs] — pointed to something unusual at these very early times.

So in the in the first four days after the Webb images were released, we wrote these papers, and we realized that GNZ11 wasn't unique — there were others of these very bright, very luminous galaxies, which we interpreted as being unusually massive. Then, within weeks, there was another one even further back in time, closer to the Big Bang, that was still very massive. That has really been a surprise. We have to ask ourselves: is it really massive? Or does it have really unusual stars in it that are very bright, but not so much mass? We just don't know at this point, but Webb can answer these questions.

What we need to do now is go in and look at those objects in more detail, see if we can learn more about what's actually in that galaxy. What the stars are like, whether there's lots of smaller stars that contribute a lot of mass. Theorists are now wondering: how do you build a galaxy like this so quickly, and does it have a black hole that's been building extremely rapidly in there as well? Are we been deceived? Galaxies can be pretty tricky. The universe can play games with you, even when you have Webb-quality data, but not enough of it.

What do you think that a situation like this says about the scientific process itself?

This is interesting, because I would say that in times past there was a very slow process of doing things. Data didn't come in very fast. We spent a lot of time working with it, sometimes you'd have to go back and get some more. Then, you know, the papers would come out, and we'd be pretty definitive. Papers come out, everybody thinks "oh, this is great." Then a year later, some new data comes along that goes "well, that was wrong." You have to recognize you can be wrong at any point, but when you're wrong, you learn new things.

I think I've never felt particularly bad if people take the care to do as well as they can at the time, and then go back and revise things. Being wrong isn't bad, it's part of the process. And it's probably inevitable at this stage.

Webb has been busy. Is there an upcoming target on its list that you're particularly excited to see and learn more about?

Yes, the big image that was shown originally, of the cluster of galaxies, that was pointed to what I think will be extremely valuable in the future for learning more about galaxies. But I don't want to just emphasize the distant galaxies — exoplanets are going to be amazing, and then of course those star-forming regions like Carina and the Tarantula Nebula. Those look magnificent, but there's an incredible amount of science in those as well.

And I would just say, you know, when I was sitting there watching the first images, I was just blown away by their beauty and the character there, the information. But one of the things I was thinking afterwards was: in that hour, I saw, like, six sets of data. I have to say, that's more data than I've ever seen from anything in any sort of reasonable time period in my whole life. Scientists are going to be working on those alone for ages, because there's so much information in those. And that was just a pathfinder —  I mean, that was tens of hours of time, so we're gonna multiply that by 100, 1000 times every year.

One of the things that I often get asked is: why does it matter? It's a lot of money. I've often thought about this, and I think the human race has a deep interest in our origins. We're interested in how we came about, how life came about. And then you really go, well, we're sitting on this little planet, how do the planets form? You can take this origins question, and that's what astronomy is really about. Webb, Hubble, these things are just origins machines. And what I really like about this, in so many ways, is that we're living in a very divisive environment, and this interest cuts across the lot of these political and otherwise areas beautifully.

It's one of those places where we still have some common interests — which I hope we can expand in the future! Webb at least should contribute to that.

More on the James Webb Space Telescope: Scientists Puzzled Because James Webb Is Seeing Stuff That Shouldn't Be There

Read This Next
Accuracy Wall
Harvard and MIT Scientists Warn That James Webb Data May Not Be What It Seems
Tada!
NASA Officially Unveils First Set of Dazzling James Webb Images
Search for Life
Former Astronaut Suggests Specific Planet for James Webb to Search for Life
Sun Screen
The James Webb Space Telescope Is Officially Unfurling Its Mighty Sunshield
Can't Hardly Wait
Memers Rejoice and Troll as James Webb Space Telescope Allegedly Prepares For Liftoff
More on Off World
Asteroid Rage
3:21 PM on the byte
Video Shows NASA Spacecraft Smashing Asteroid From Earth's View
Grain of Salt
2:27 PM on futurism
There's a Huge Problem With Elon Musk's Promise to Bring Starlink to Iran
Asteroid Blaster
Yesterday on the byte
NASA Slams Spacecraft Into Asteroid to Test Earth Saving Tech
READ MORE STORIES ABOUT / Off World
Keep up.
Subscribe to our daily newsletter to keep in touch with the subjects shaping our future.
+Social+Newsletter
TopicsAbout UsContact Us
Copyright ©, Camden Media Inc All Rights Reserved. See our User Agreement, Privacy Policy and Data Use Policy. The material on this site may not be reproduced, distributed, transmitted, cached or otherwise used, except with prior written permission of Futurism. Articles may contain affiliate links which enable us to share in the revenue of any purchases made.
Fonts by Typekit and Monotype.