Scientist Proposes Growing a Forest Inside a Bubble on Mars

"The survival of life, in any form, is the ultimate biocentric priority." 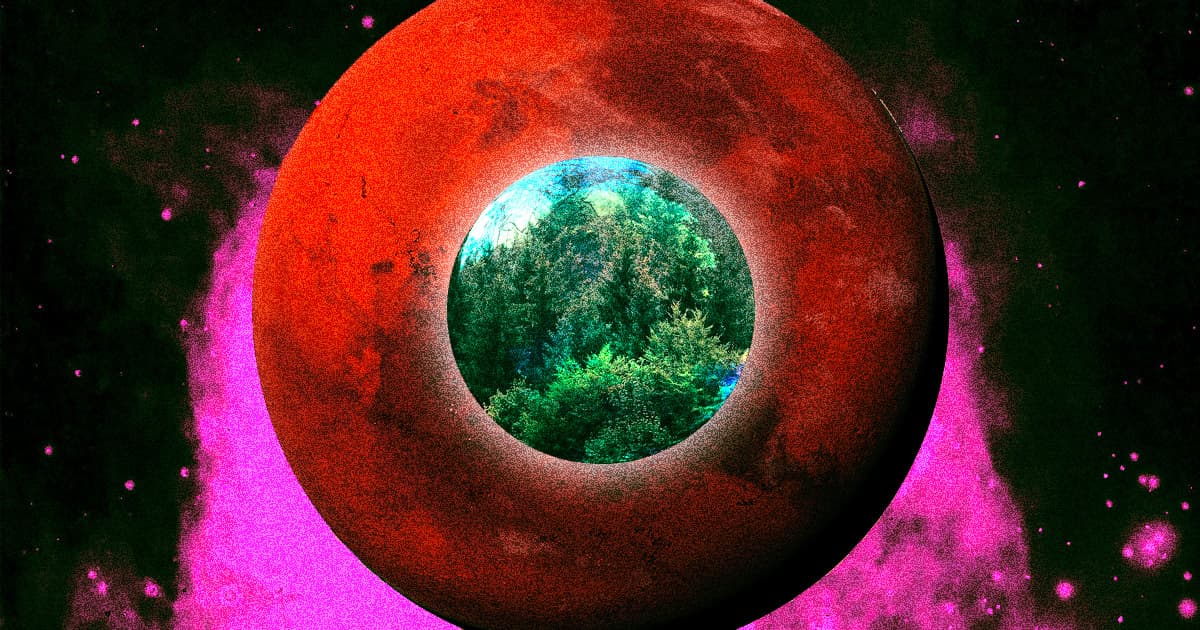 The human quest to become an interplanetary species isn't simply just because we've seen too much "Star Wars."

Over the past century or so, we've put our home planet under an increasingly dire amount of pressure. There's only so much space, only so many resources, and even if we do make some ecological moves to avoid turning Earth into a giant landfill, population growth isn't showing any signs of stopping. Some believe that settling other planets — and thus, theoretically alleviating the growing strain on even Earth's most bountiful resources — is the only way to preserve our species.

That being said, humans have been able to flourish on Earth because of those resources, which makes colonizing other planets incredibly challenging (you know, assuming that we can figure out a way to actually transport large groups of people to new worlds).

Thankfully, University of Bristol civil engineer Paul Smith has a plan: he wants to build an Earthly forest in a bubble on the surface of Mars. Naturally.

"If human population growth is not controlled, natural areas must be sacrificed," Smith wrote in a paper recently published in the International Journal of Astrobiology and spotted by Universe Today. "An alternative is to create more habitat, terraforming Mars."

Mars is obviously a very different planet from Earth — it's colder, dryer, and has a vastly different atmosphere, among other major dissimilarities — but it's believed to contain large reservoirs of frozen ice beneath its surface. Under the presumption that humans could access and utilize those reservoirs, the aforementioned challenges could be assuaged by the creation of an atmosphere-controlled container. Or, if you will: a bubble.

Martian regolith is also rich in some elements needed for Earthly agriculture, particularly phosphorous. (But it's worth noting that it falls short of a number of essential micronutrients, as well as soil-enriching microbiota and important organisms like earthworms.)

Importantly, Smith isn't suggesting that humans should terraform the entire Martian surface. Instead, the bubbles — which he imagines would be "facsimile" models of old growth Earthly forests — would effectively serve as oases, offering both emotional and practical benefits for planet-hopping Earthlings. (Interestingly, the idea sounds similar to Elon Musk's original interplanetary pet project, before SpaceX, to send a simple rocket to Mars where it would deploy a small greenhouse.)

Mars' ultra-high radiation levels are probably the biggest wrench in Smith's plan, as is the question of how our dusty red neighbor's differing magnetic field might impact any growing vegetation.

But of course, questions like that come naturally with the interplanetary territory, and if humans do one day make it back to the Moon, to Mars, and beyond, many more like it are to come. And regardless of what he's proposed is feasible, the message in Smith's paper does read like a hopeful one: that in exploring and even inhabiting new worlds, we'll be able to preserve the one we already have.

"From a biocentric perspective, world leaders should be concerned about the future of life in the Universe and humanity's role in its protection and promulgation," Smith writes. "On a planet of limited habitability, this is a significant duty. The survival of life, in any form, is the ultimate biocentric priority."

READ MORE: Should We Build a Nature Reserve on Mars? [Universe Today]

More on off-world inhabitation: Nasa Hires Company to 3d Print American Base on the Moon

Read This Next
A Sip of Opal
NASA Discovers Precious Gemstones on Mars
Big Impact
Meteorite Hit Mars So Hard NASA Thought It Was a Quake
Palliative Care
NASA's Mars Lander Refuses to Die Even Though It's Supposed To
Signs Of Life
NASA Seems Awfully Excited About Finding Organic Matter on Mars
Muellholland Drive
SpaceX Defector Is Aiming to Land on Mars Before Elon Musk
More on Off World
Take Cover
Yesterday on the byte
Space Startup Blows Up Another Giant Inflatable Space Station Module
Rock Blast
Yesterday on the byte
Scientists Say There's an Upside to Those Rocks That Keep Bludgeoning the James Webb
Meathead Theory
Yesterday on the byte
Professor Receives Insane Email Claiming "Biological" Green Comet Is Giving Off "Meat Smoke"
READ MORE STORIES ABOUT / Off World
Keep up.
Subscribe to our daily newsletter to keep in touch with the subjects shaping our future.
+Social+Newsletter
TopicsAbout UsContact Us
Copyright ©, Camden Media Inc All Rights Reserved. See our User Agreement, Privacy Policy and Data Use Policy. The material on this site may not be reproduced, distributed, transmitted, cached or otherwise used, except with prior written permission of Futurism. Articles may contain affiliate links which enable us to share in the revenue of any purchases made.
Fonts by Typekit and Monotype.