"This quasicrystal is magnificent in its complexity — but nobody can yet tell us why it was formed in this way." 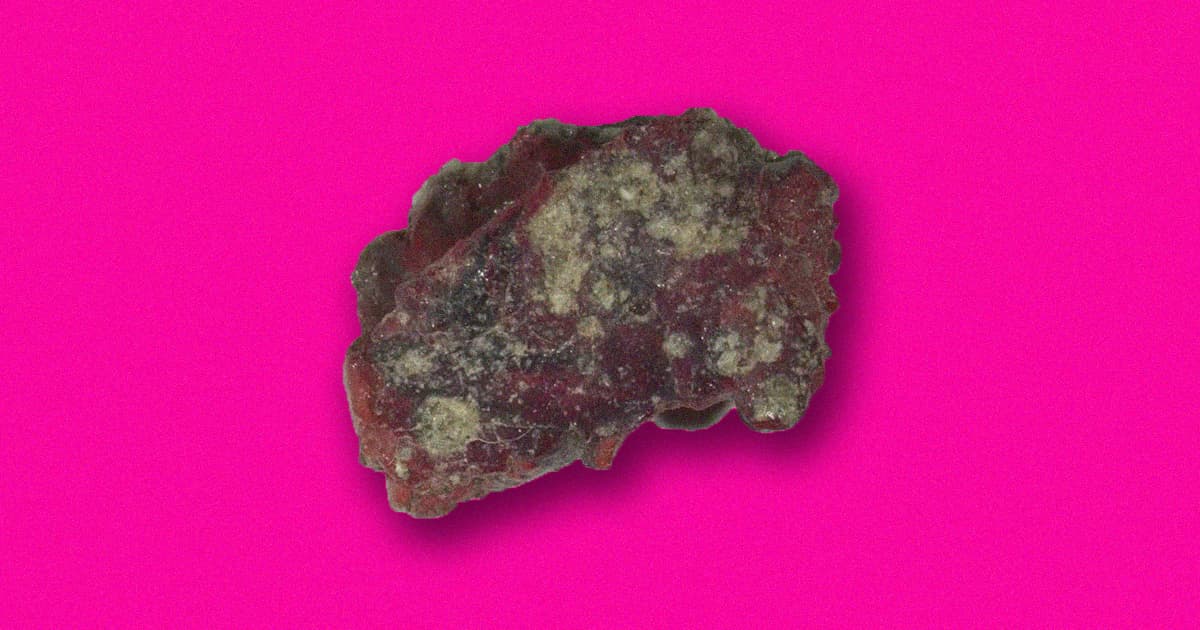 In July 1945, the US Army conducted the first ever nuclear bomb test in New Mexico, called "Trinity." The prototype weapon of mass destruction, known as "Gadget," exploded and released energy equivalent to about 21 kilotons of TNT.

In the 1980s, scientists discovered that the nuclear explosion inadvertently created an entirely new material. Surrounding sand, a 90 foot tower, and copper transmission lines were fused together to form a glass-like material called trinitite.

Inside this trinitite, scientists discovered a rare form of matter called a "quasicrystal." Rather than the atoms being arranged in a pattern that repeats itself in all three dimensions, as is the case in ordinary crystals found in nature, quasicrystals have atoms that aren't arranged in a periodic pattern.

Some of the trinitite that was formed in the 1945 explosion has a 5-fold rotational symmetry, meaning that atoms are arranged to form the shape of a 20-sided solid called an icosahedron.

This highly unusual symmetry, which is not possible in nature, was outlined in a new paper to be published in an upcoming issue of the journal Proceedings of the National Academy of Science.

The research could shed light on what exactly unfurls during nuclear bomb detonations and how they affect the natural surroundings.

"Here, we report the discovery, in a sample of red trinitite, of a hitherto unknown composition of icosahedral quasicrystal, Si61Cu30Ca7Fe2," the international team of researchers wrote in their paper. "It represents the oldest extant anthropogenic quasicrystal currently known, with the distinctive property that its precise time of creation is indelibly etched in history."

"Quasicrystals are formed in extreme environments that rarely exist on Earth,” said Terry Wallace, director emeritus of Los Alamos National Laboratory and co-author of the paper, in a statement.

"They require a traumatic event with extreme shock, temperature, and pressure," he added. "We don’t typically see that, except in something as dramatic as a nuclear explosion."

The only comparable material found in nature, the researchers say, is a meteorite that dates back at least hundreds of millions of years.

"This quasicrystal is magnificent in its complexity — but nobody can yet tell us why it was formed in this way," Wallace explained.

"But someday, a scientist or engineer is going to figure that out and the scales will be lifted from our eyes and we will have a thermodynamic explanation for its creation," he added. "Then, I hope, we can use that knowledge to better understand nuclear explosions and ultimately lead to a more complete picture of what a nuclear test represents."

Read This Next
Doomsday Machine
Here's Exactly How Screwed You'd Be in a Nuclear Apocalypse
More on Earth & Energy
His Power
Yesterday on the byte
Scientists Develop Compound That Kills So Efficiently They Named It After Keanu Reeves
Dishonorable Disc...
Monday on the byte
Scientists Alarmed by Video of Deep Sea Mining Company Spewing Waste Into Ocean
Save Yourselves
Feb 5 on the byte
Furious Marsupial So Thirsty For Sex That It’s Dying, Scientists Warn
READ MORE STORIES ABOUT / Earth & Energy
Keep up.
Subscribe to our daily newsletter to keep in touch with the subjects shaping our future.
+Social+Newsletter
TopicsAbout UsContact Us
Copyright ©, Camden Media Inc All Rights Reserved. See our User Agreement, Privacy Policy and Data Use Policy. The material on this site may not be reproduced, distributed, transmitted, cached or otherwise used, except with prior written permission of Futurism. Articles may contain affiliate links which enable us to share in the revenue of any purchases made.
Fonts by Typekit and Monotype.