An Underground Tank Is Leaking Massive Amounts of Radioactive Waste

At least 200,000 gallons of nuclear waste are threatening to contaminate one of the largest rivers in the country. 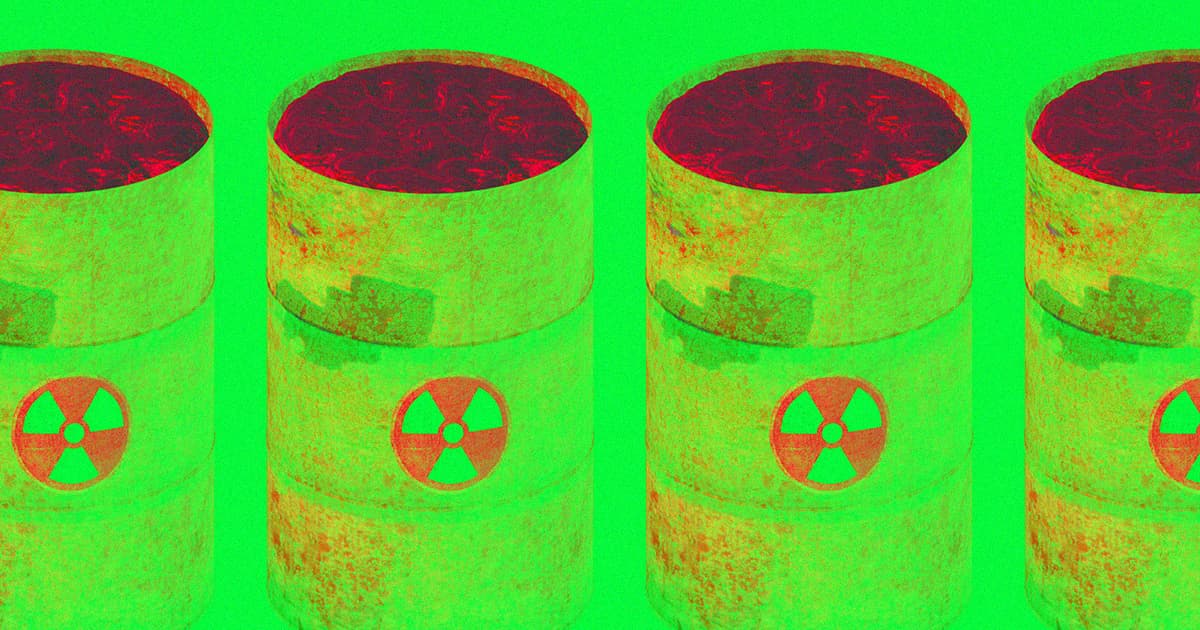 According to a new report by the Washington State Department of Ecology, a massive underground radioactive chemical storage tank in the state is leaking hundreds of thousands of gallons of nuclear waste into the ground nearby.

That's bad news, reigniting fears that the waste may end up in the Columbia River, one of the largest rivers in the United States and which runs only ten miles from the site — and that latest sign that nuclear facilities can cause grave environmental risks for extremely extremely long periods of time.

The storage tank, located within the Hanford Site, a decommissioned complex in Washington state that made plutonium for nuclear weapons during World War II, holds 123,000 gallons of leftover waste.

Some of this radioactive and chemical waste has been leaking into the ground at a rate of roughly 3.5 gallons a day, contaminating both land and groundwater sources, according to the Department.

Other tanks in the area have already leaked an estimated 200,000 gallons of radioactive waste, according to CBS News.

Experts, however, believe the reality could actually be much worse.

"This leak is adding to the estimated one million gallons of tank waste already in the soil across the Hanford site," Washington State Department of Ecology director Laura Watson said in a statement.

"This highlights the critical need for resources to address Hanford’s aging tanks, which will continue to fail and leak over time," she added.

According to CBS, more than 67 tanks at the site are suspected to be leaking or have already leaked.

Since the late 1980s, workers have actively been trying to clean up, treat, and dispose of the waste to reduce the threat it poses, a collaborative effort established under the Tri-Party Agreement between the Washington State Department of Ecology, the Environmental Protection Agency, and the Department of Energy.

Yet roughly 60 square miles of groundwater remain contaminated well above federal standards, according to the Department of Ecology. The site still contains "some of the nation's most complicated nuclear and mixed dangerous waste, which must be cleaned up."

As of right now, "the leak poses no immediate increased risk to workers or the public, but it adds to the ongoing environmental threat at Hanford," Watson told CBS News.

The three agencies are now trying to come to an agreement as to what action to take — but time appears to be running out.

More on radioactive waste: Japan Says Sorry, But It Has to Dump This Radioactive Water Into the Ocean

Read This Next
Futurism
This Is What Nuclear Warfare Will Do To Our Planet
Futurism
Diamond Batteries Made of Nuclear Waste Can Generate Power For Thousands of Years
More on Earth & Energy
Do The Worm
Yesterday on the byte
Scientists Name "Funky Worm" Amphibian After a Weird 70s Funk Song
Cow Chow
Thursday on the byte
Bill Gates Gives $12 Million to Flatulent Australian Cows
Dye in the Water
Thursday on the byte
Scientists Dye Chunks of Ocean Water Pink for Head-Turning Coastal Experiment
READ MORE STORIES ABOUT / Earth & Energy
Keep up.
Subscribe to our daily newsletter to keep in touch with the subjects shaping our future.
+Social+Newsletter
TopicsAbout UsContact Us
Copyright ©, Camden Media Inc All Rights Reserved. See our User Agreement, Privacy Policy and Data Use Policy. The material on this site may not be reproduced, distributed, transmitted, cached or otherwise used, except with prior written permission of Futurism. Articles may contain affiliate links which enable us to share in the revenue of any purchases made.
Fonts by Typekit and Monotype.