Facebook Threatens to Pull Out of Europe, Europe Says "Please Do"

"I can confirm that life would be very good without Facebook." 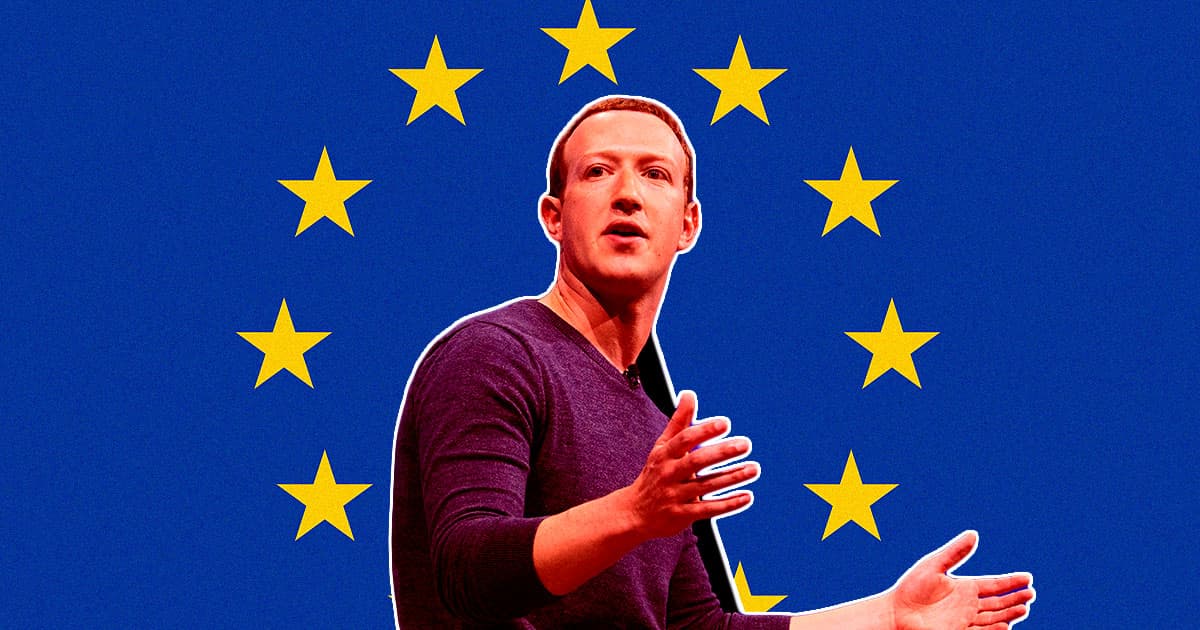 Facebook's parent company Meta warned this week that it could shut down Facebook and Instagram operations in Europe if it was no longer allowed to store data on European users in the US.

But to its presumable dismay, European lawmakers called the megacorporation's bluff.

"I can confirm that life would be very good without Facebook and that we would live very well without Facebook," French finance minister Bruno Le Maire told reporters during a meeting on Monday, as quoted by Euronews.

"After I was hacked I have lived without Facebook and Twitter for four years and life has been fantastic," he quipped.

It's a refreshing articulation of what many of us have been thinking for years now. The world would arguably be a much better place without Facebook and Instagram, platforms that have repeatedly failed to keep rampant abuse and hate speech in check.

Hilariously, Meta has now approached the bargaining table with its proverbial tail between its legs.

"We have absolutely no desire and no plans to withdraw from Europe, but the simple reality is that Meta, and many other businesses, organizations and services, rely on data transfers between the EU and the US in order to operate global services," the company wrote in a statement obtained by City A.M.

Earlier this year, Meta warned the US Securities and Exchange Commission in its annual filing that it no longer wanted to run Facebook and Instagram in the EU if lawmakers couldn't find a way to allow them to move and store Europeans' data on US servers.

"If a new transatlantic data transfer framework is not adopted… we will likely be unable to offer a number of our most significant products and services, including Facebook and Instagram, in Europe," the filing reads.

The company argued that not being allowed to store its data on servers located in the EU would hobble its targeted advertising business.

New data protection laws in the EU, however, require companies including Meta to process data on EU citizens within Europe.

Previously, Meta was operating within a framework called Privacy Shield that allowed it to move the data. But the framework was struck down by the European Court of Justice in July 2020, with jurors arguing the agreement violated new data protection laws.

"There has been reporting in the press that we are 'threatening' to leave Europe because of the uncertainty over EU-US data transfers mechanisms," Markus Reinisch, a VP of Meta's Public Policy Europe, wrote in a blog published on Tuesday. "This is not true. Like all publicly-traded companies, we are legally required to disclose material risks to our investors."

Of course, that all seems to contradict the company's own SEC filing.

"We have absolutely no desire to withdraw from Europe; of course we don’t," Reinisch went on. "But the simple reality is that Meta, like many other businesses, organizations and services, relies on data transfers between the EU and the US in order to operate our global services."

"We want to see the fundamental rights of EU users protected, and we want the internet to continue to operate as it was intended: without friction, in compliance with applicable laws," the VP argued, "but not confined by national borders."

The disagreement only underlines just how unpopular Meta has become among lawmakers around the world.

Its refusal to work with lawmakers to ensure citizens' data is well protected within the EU only goes to show that Meta does not have its users' best interest in mind.

Remember: if you're not the customer, you're the product.

READ MORE: Meta’s threat to close down Facebook and Instagram in Europe backfires as EU leaders embrace shutdown: ‘Life would be very good without’ [City A.M.]

Read This Next
Midlife Crisis
Rumors Swirl That Mark Zuckerberg Is Fighting at a UFC Show
Mark's Bad Year
Layoffs Hitting Facebook as Zuckerberg's Vision Stumbles
Saving Face
People Bullied Mark Zuckerberg So Much That He's Improving the Metaverse Graphics
Meta-Terrorism
OnlyFans Accused of Paying Bribes to Put Enemies on Terrorist Watchlist
Outta Luck Zuck
Gov Files Antitrust Suit to Stop Facebook From Buying VR Company
More on Future Society
The Dress
Yesterday on the byte
Watch a Model Get a Dress "Sprayed" Onto Her in the Middle of a Fashion Show
Meta Shift
Yesterday on the byte
CEO of Apple Appears to Casually Diss Mark Zuckerberg's Metaverse
Cool MMArk
Yesterday on the byte
Mark Zuckerberg's Wife Looks Absolutely Horrified by His New Hobby
READ MORE STORIES ABOUT / Future Society
Keep up.
Subscribe to our daily newsletter to keep in touch with the subjects shaping our future.
+Social+Newsletter
TopicsAbout UsContact Us
Copyright ©, Camden Media Inc All Rights Reserved. See our User Agreement, Privacy Policy and Data Use Policy. The material on this site may not be reproduced, distributed, transmitted, cached or otherwise used, except with prior written permission of Futurism. Articles may contain affiliate links which enable us to share in the revenue of any purchases made.
Fonts by Typekit and Monotype.