"The work that we do is a kind of mental torture." 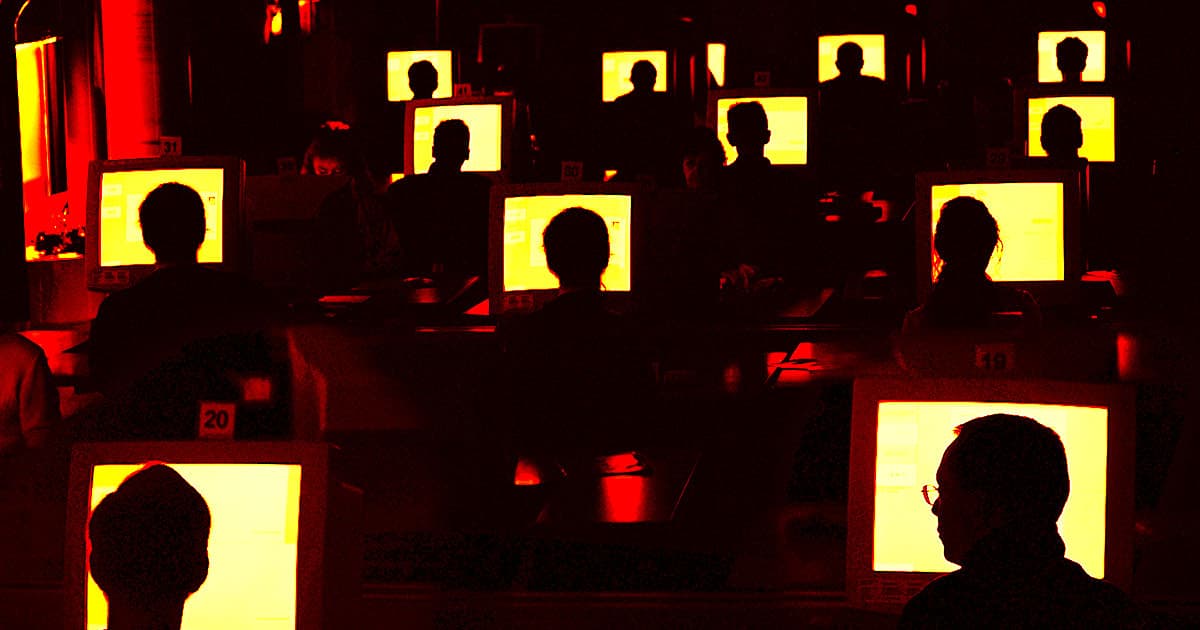 Facebook's lowest paid workers, a new investigation reveals, make only $1.50 an hour to moderate violent and disturbing content in an outsourced facility in Kenya — and that's not the only difficulty they face on the job.

A new TIME investigation reveals that the Nairobi offices of the "ethical AI" outsourcing company Sama — which provides Facebook's content moderation for all of sub-Saharan Africa — is home to a host of issues including the mental anguish associated with the content workers are required to view for work, as well as alleged workplace intimidation and suppression of union organizing.

Based in California, Sama has a do-gooder veneer characterized by its "give work, not aid" ethos that's won the company contracts with Microsoft, Google, and even Walmart. The "dignified digital work" they publicly claim to provide, however, looks a lot different on the ground in Nairobi, where TIME spoke to over a dozen former and current Sama employees and reviewed hundreds of documents.

"The work that we do is a kind of mental torture," one current Sama employee that works as an outsourced Facebook content moderator told TIME, who like others who spoke to the magazine did so on condition of anonymity for fear of retribution or job loss. "Whatever I am living on is hand-to-mouth. I can’t save a cent. Sometimes I feel I want to resign. But then I ask myself: what will my baby eat?"

Why does this matter?

Facebook’s content moderation for Sub-Saharan Africa, including Ethiopia where a bloody civil war is raging, happens out of this office.

FB has been accused of not doing enough to prevent content on its platform contributing to ethnic violence there.

At least two Sama workers TIME is aware of did end up quitting after being diagnosed with post-traumatic stress disorder, and others the magazine spoke to said they were unable to get formal diagnoses because they couldn't afford adequate mental health help or simply worked through the trauma because they needed the job. The company nominally offers on-site counseling to employees, but those that spoke to TIME said they don't trust the Sama-paid counselors and even when they do want to seek their help, managers have rejected the mental health contractors' requests to give employees "wellness breaks" because it would harm productivity.

This investigation is far from the first time the grueling work of Facebook content moderators have been made public.

In 2014, a Wired investigation broadcasted to the world the horrific work required of content moderators at a facility in the Philippines whose job it was to sift through veritable mountains of banned content, from child pornography to videos of people being killed. That story, and the many others like it that ensued, spotlighted the low paid and outsourced work that keeps our social feeds relatively clean.

Instead of negotiating when workers threatened a strike, workers told TIME, Sama flew top executives from California to Nairobi and fired the nascent strike's leader as he was about to file trade union papers, and threatened others who participated in the labor action by telling them they could either get back to work or be fired. The company's suppression was successful, and the would-be striker stood down before the week they'd given Sama to respond was up.

Though the company denies that the planned strike and labor action even happened, the London-based legal NGO Foxglove, with the help of the Kenyan public interest law firm The Katiba Institute, told TIME that it's preparing to sue Sama for its alleged wrongful termination of the strike leader.

While neither the horrors faced by content moderators nor the tech industry's anti-labor maneuvering are new on their own, the intersection of the two sets a dangerous precedent. As Facebook and other companies that run giant global social network continue to have the need for content moderation, so too will they continue to outsource — and, unfortunately, they're gonna keep trying to bust unions while doing so.

More on the terror of content moderation: Facebook Will Pay Mods $52 Million for Trauma From Gore, Sexual Abuse

Read This Next
Petty Tyrant
Free Speech Champion Elon Musk Is Mass Suspending Twitter Accounts of Journalists Who Criticized Him
Make Mark Happy
Facebook Employees Seem Completely Confused by the Metaverse
Midlife Crisis
Rumors Swirl That Mark Zuckerberg Is Fighting at a UFC Show
Mark's Bad Year
Layoffs Hitting Facebook as Zuckerberg's Vision Stumbles
Saving Face
People Bullied Mark Zuckerberg So Much That He's Improving the Metaverse Graphics
More on Future Society
Down in Flames
Wednesday on the byte
Elon Musk Apparently Thinks Twitter Is a "Flaming Dumpster Rolling Down the Street"
All Tomorrow's Pa...
Wednesday on the byte
Party Startup Says It Has Zero Plans to Make Any Money With Investors' Funds
Primate Theft
Tuesday on the byte
It Was a Very Bad Weekend for Monkeys Being Stolen From Zoos, Apparently
READ MORE STORIES ABOUT / Future Society
Keep up.
Subscribe to our daily newsletter to keep in touch with the subjects shaping our future.
+Social+Newsletter
TopicsAbout UsContact Us
Copyright ©, Camden Media Inc All Rights Reserved. See our User Agreement, Privacy Policy and Data Use Policy. The material on this site may not be reproduced, distributed, transmitted, cached or otherwise used, except with prior written permission of Futurism. Articles may contain affiliate links which enable us to share in the revenue of any purchases made.
Fonts by Typekit and Monotype.