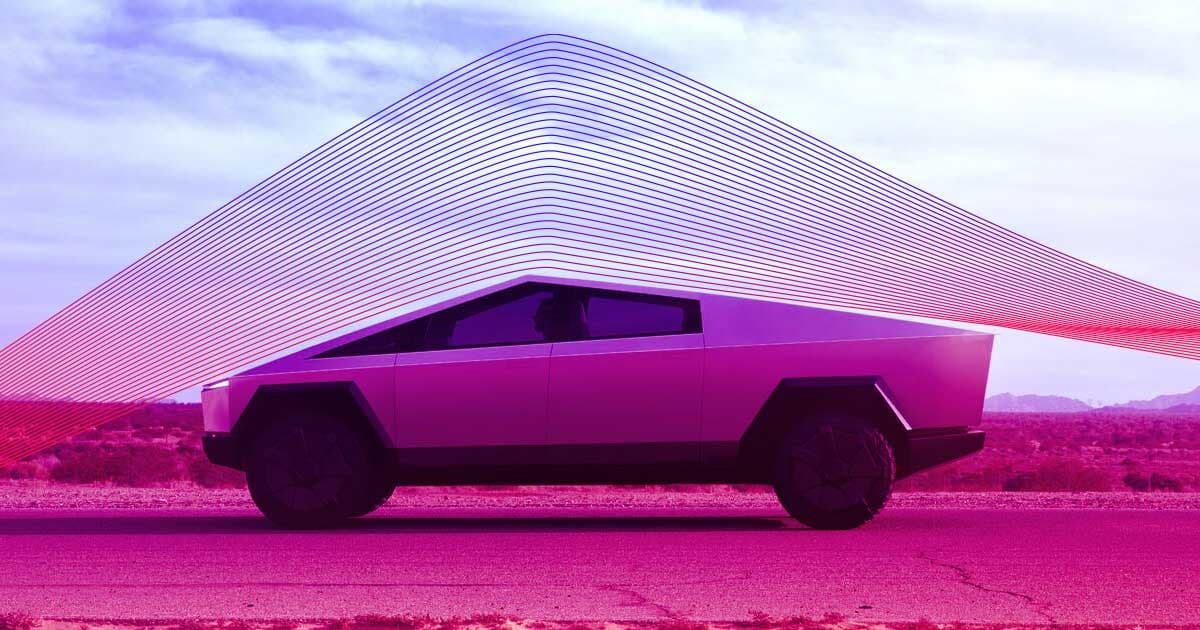 Aerodynamics are extremely important in electric vehicles, because air resistance can heavily impact the number of miles you can squeeze out of a battery pack — particularly when you're battling other forces such as pulling a massive trailer or driving with thousands of pounds of lumber in the bed.

Musk's tweet was in response to an investigation by aerospace engineer Justin Martin, who found that the truck's unusual shape mostly only caused turbulence at the peak of the windshield and, as expected, behind the vehicle.

Since Martin didn't know the shape of the fenders and wheel wells, he decided not to estimate a drag coefficient, as Interesting Engineering points out.

"While it may occur to be happenstance that the [aerodynamics turned] out quite well, I believe this was actually the result of very clever design," wrote Martin in an Instagram caption. "I won't quote a drag coefficient, as I [don't] want to put words in anyone's mouth, but I will place money on it being much lower than most sports cars (due to down force), and nearly any (1/2 ton) truck period."

Musk also noted that "laminar air flow due to a completely smooth bottom is underappreciated" in a follow up tweet, referring to the fact that many electric vehicles, Tesla's included, have an almost completely flat bottom thanks to their battery packs. Conventional pickup trucks have complex underbodies, including axles, driveshafts, and other components sticking out, creating air resistance.

But not everybody agrees with Martin's conclusion. Most of these fluid dynamics simulations rely on assumptions. Wheel wells, bumpers, and side view mirrors — which are still legally mandated in most of the U.S. but were lacking in the model Tesla showed off — could drastically change the results once the final consumer model rolls off the line two years from now.

Drag coefficients also don't provide a complete picture of how efficiently an electric vehicle will use available power.

"The drag coefficient as a concept is useful, but it is only one point of reference," professor of environmental fluid mechanics at the University of Birmingham Chris Baker told Inverse last week. "It says nothing about how drag varies with small cross winds, how the vehicle handles in cross winds, what the overall energy consumption is."

Other aspects such as regenerative breaking, and the gearing and efficiency of the motors used will affect the range as well. And that's without mentioning the Cybertruck's stainless steel exoskeleton, which will likely make it considerably heavier than other cars in the same segment.

Read This Next
Where's Musko
7 Theories About Why Elon Musk Has Disappeared
tesla recall
Tesla Accused of Shutting Off Autopilot Moments Before Impact
Fiery Furnaces
Firefighters Struggle as Junkyard Tesla Bursts Into Flames Weeks After Crash
New Low Score
Tesla Reportedly Giving Full Self-Driving Beta to Basically Anybody Now
Stonk Broke
Twitter Bots Love Tesla. Elon Musk Is Pledging to Destroy Them
More on Advanced Transport
Shiny!
9:24 PM on the byte
Beautiful Render Shows Starship With Full NASA Paint Job
Glitchy Boi
6:20 PM on the byte
Glitch in 59,000 Teslas Fails to Call 911 When You Crash
Wrong Turn
Jul 2 on the byte
Terrifying Video Shows Self-Driving Tesla Head Into Oncoming Traffic
READ MORE STORIES ABOUT / Advanced Transport
Keep up.
Subscribe to our daily newsletter to keep in touch with the subjects shaping our future.
+Social+Newsletter
TopicsAbout UsContact Us
Copyright ©, Camden Media Inc All Rights Reserved. See our User Agreement, Privacy Policy and Data Use Policy. The material on this site may not be reproduced, distributed, transmitted, cached or otherwise used, except with prior written permission of Futurism. Fonts by Typekit and Monotype.