Dubai's Newest Addition to the Police Force: A Robot

Police forces are increasingly adding robots to their rosters. 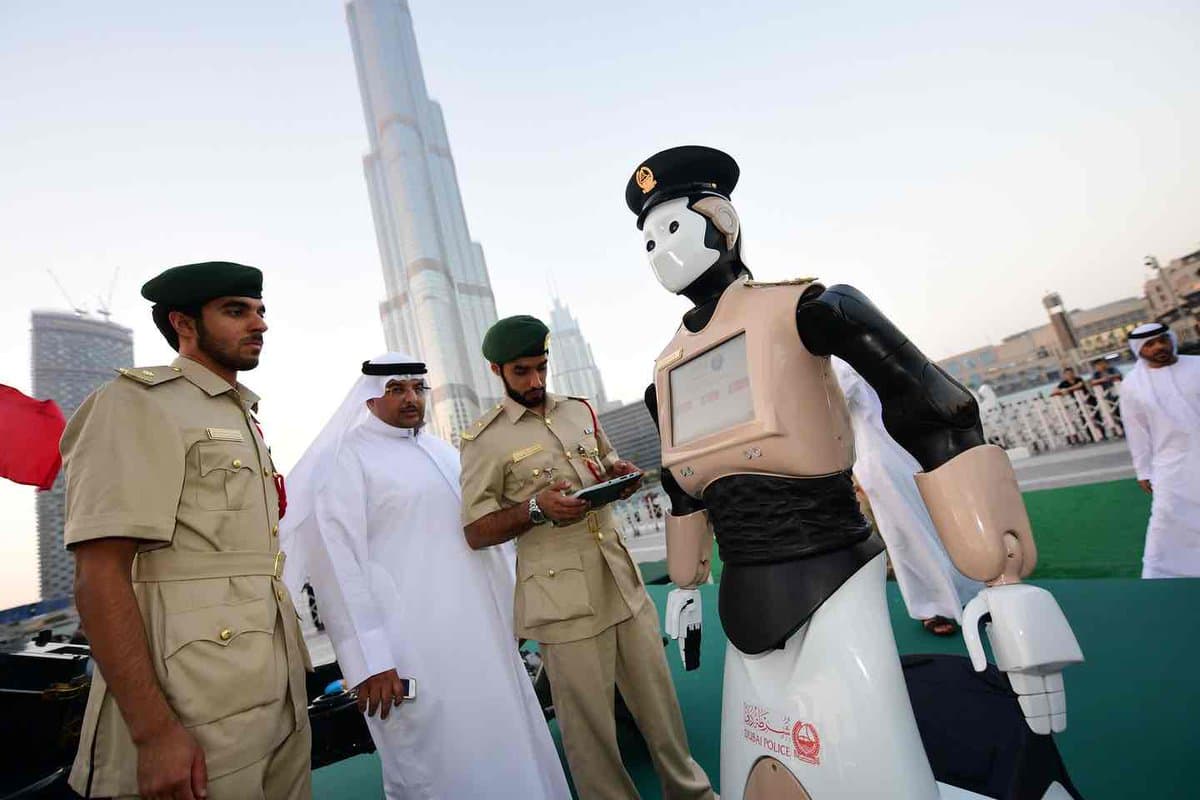 Image by Giuseppe Cacace/AFP/Getty Images
Disclosure: The Dubai Future Foundation works in collaboration with Futurism and is one of our sponsors.

Dubai is set to introduce the newest member of their police force: a 5-foot, 5-inch [165.1 cm], 222-pound [100.698 kg] robot which will be equipped with facial recognition technology and have the ability to broadcast live video feeds. The first model, which will begin patrolling the streets of the futuristic city today, will not be on the front lines making arrests, but will be interacting with the community. Residents of Dubai will be able to report crimes, pay fines, and ask the robot questions (though what sort of questions is unclear).

The head of Dubai's Police Tech division told reporters at the Gulf Information Security Expo and Conference that “by 2030, [Dubai is] keen to make robots around 25% of the total police force.” Though this may sound like the beginning of a dystopian novel, this is not the first robot in use by a police force.

Police departments in the United States use robots for training purposes and also utilize bomb-diffusing robots that were first created for the American military. In 2016, the Cleveland Police used robots to patrol the Republican National Convention, while police in Dallas outfitted a robot with a bomb to kill a sniper after losing numerous police lives. South Korea has robot prison guards, and Israeli police use robots in their counter-terrorism unit.

While this is not the first robot to be put into use by police, it is the first that will be ever present on the streets of a city that will eventually be able to make arrests and have all of the responsibilities of a regular cop. The rollout will happen over the next decade, so hopefully that will be enough time to work out any kinks — including robots' lack of human empathy. And, as these robots have recording capabilities, make sure none of them document any PDA on video.

Read This Next
Diner Drama
People Furious at Robot Serving Pancakes at Denny's
Robot Violence
YouTube Accidentally Removed Robot Battle Videos for "Animal Cruelty"
Buzz Off
Tiny Spies: This Insect-Like Flying Robot is Smaller Than a Penny
Automating Gym Class
Toyota's Basketball Robot Can Nail Three-Pointers
Guardian Exoskeleton
The U.S. Military is Buying a Brutal-Looking Powered Exoskeleton
More on Robots & Machines
From the Dept. of...
Yesterday on futurism
The Best Exercise Bikes of 2023
It's Nothing Pers...
Thursday on the byte
Scientists Create Shape-Shifting Robot That Can Melt Through Prison Bars
From the Dept. of...
Thursday on futurism
The Best Smart Lights of 2023
READ MORE STORIES ABOUT / Robots & Machines
Keep up.
Subscribe to our daily newsletter to keep in touch with the subjects shaping our future.
+Social+Newsletter
TopicsAbout UsContact Us
Copyright ©, Camden Media Inc All Rights Reserved. See our User Agreement, Privacy Policy and Data Use Policy. The material on this site may not be reproduced, distributed, transmitted, cached or otherwise used, except with prior written permission of Futurism. Articles may contain affiliate links which enable us to share in the revenue of any purchases made.
Fonts by Typekit and Monotype.