Cute, Brainless, Self-Propelled Robots Could Someday Move Around Inside Animals

The self-organized movement of the little scamps gives insight into how microbes navigate. 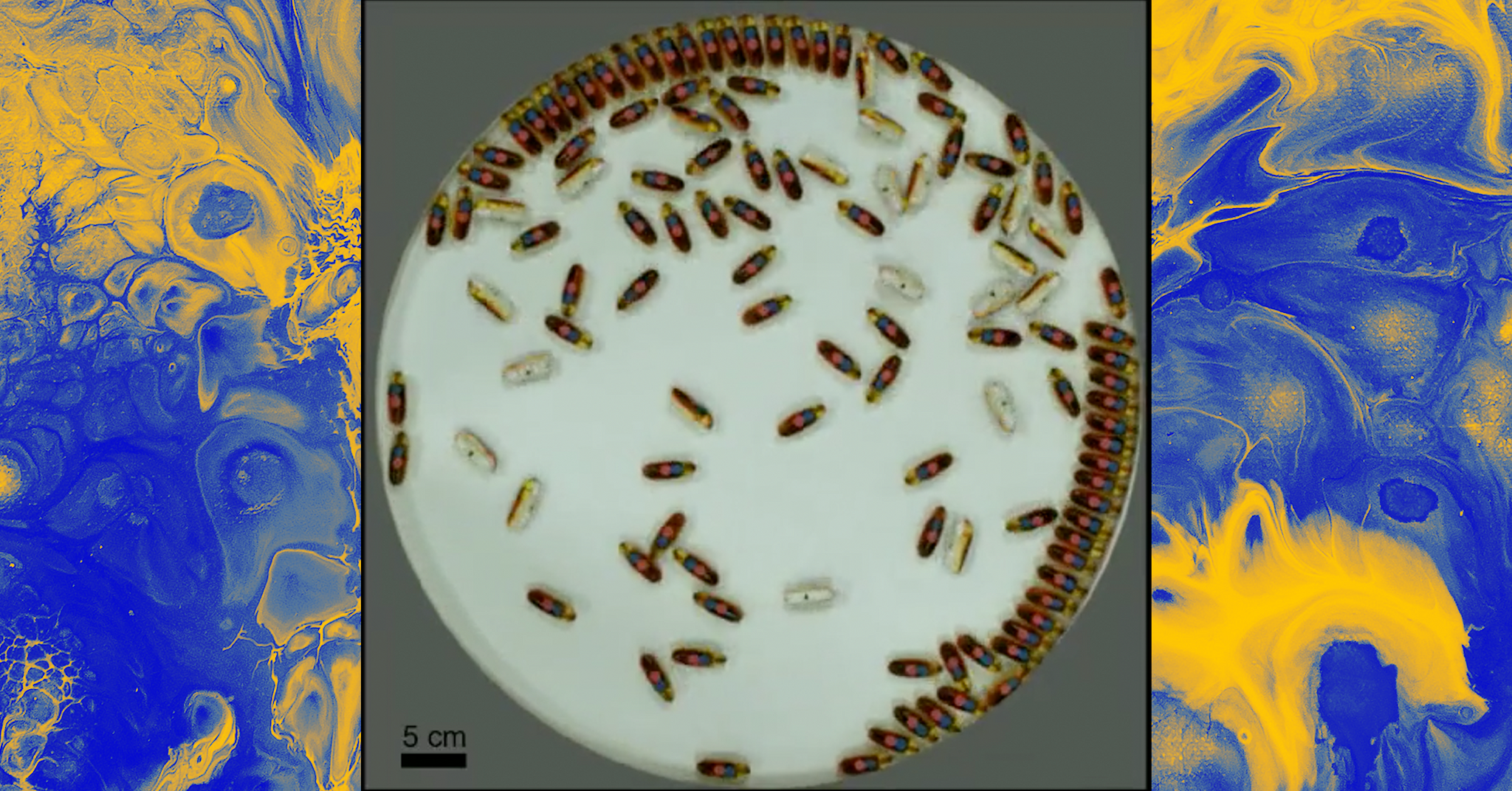 It’s a classic thought experiment: If you put a bunch of tiny little jumping bean-like robots in a room together, will they just run into each other? Or will they figure out how to organize? By classic, of course, we mean something that a bunch of French physicists decided to try out because hey, science should be fun.

Researchers put a whole bunch of tiny, pill-shaped toy robots in a circular pen and let them mindlessly zip around. The resulting behavior, which looked somewhat organized, could give scientists insight into how microbes like bacteria move around. It could also give rise to better swarm robotics of little (smaller than the toys used in this study, for sure) pill-bots that can move around inside of an organism, perhaps to deliver a medication.

When the bots were switched on, they started to act like gas particles, as described by Phys.org. That is to say, moved around in what’s called a "random walk," a type of model used by biological and medical physicists to describe a mindless entity (like these very simple bots) that’s just as likely to move in one direction as it is another.

But then the bots began to cluster in two groups on opposite sides of their pen, pushing against the outer boundary. When the pen was replaced with a mobile, flexible one that the bots would be able to push around with collective movement, they managed to squeeze the entire thing in between the small opening in a nearby wall.

Any direct applications of these cute little bean-bots are still pretty speculative, as this is some early work, it’s possible that models based on their behavior and pathways could result in a better understanding of microbial biology. In particular, how bacteria navigate and invade cells or how to better control a robotic collective in a coordinated fashion.

Read This Next
Diner Drama
People Furious at Robot Serving Pancakes at Denny's
Killer Robot Update
Uh Oh, They Strapped a Sniper Rifle to a Robot Dog
Bleep Bloop
Scientists Build "First Living Robots" From Frog Stem Cells
Brands We Love
This LEGO Robot Is the Fun Way to Teach Your Kids About Coding and STEM
Robot Violence
YouTube Accidentally Removed Robot Battle Videos for "Animal Cruelty"
More on Robots & Machines
FROM THE DEPT. OF...
Yesterday on futurism
Best JBL Speakers in 2022
FROM THE DEPT. OF...
Yesterday on futurism
Best Mini PCs for Gaming in 2022
FROM THE DEPT. OF...
Yesterday on futurism
Best Bass Headphones for 2022
READ MORE STORIES ABOUT / Robots & Machines
Keep up.
Subscribe to our daily newsletter to keep in touch with the subjects shaping our future.
+Social+Newsletter
TopicsAbout UsContact Us
Copyright ©, Camden Media Inc All Rights Reserved. See our User Agreement, Privacy Policy and Data Use Policy. The material on this site may not be reproduced, distributed, transmitted, cached or otherwise used, except with prior written permission of Futurism. Fonts by Typekit and Monotype.