We may be closer than ever to unlocking the secrets of one of the eigth wonders of the world. 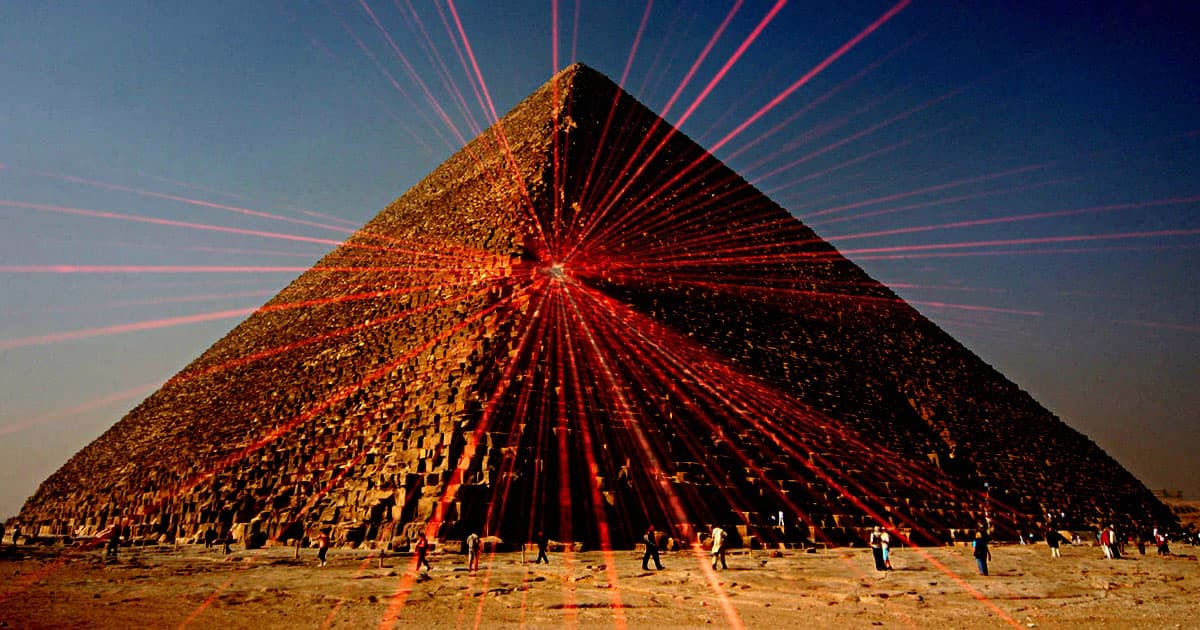 The concept of using space rays to peer into pyramids may sound like something out of "Ancient Aliens," but it's grounded in solid science.

In a new interview with Live Science, Fermi National Laboratory scientist Alan Bross said that he and his team, an eclectic mix of archaeologists and physicists, have gotten permission from the Egyptian government to use highly sensitive cosmic ray technology to scan the Great Pyramid of Giza for what may be a hidden burial chamber.

A yet-to-be peer reviewed paper reveals Bross and his team's scheme, which is based on experiments conducted nearly 50 years ago using a more rudimentary version of the same cosmic ray-scanning tech they're proposing now.

The tech at the heart of this potential pyramid-scanning experiment relies upon muons, the elementary particle created when cosmic rays hit atoms in Earth's atmosphere. A couple hundred times more massive than electrons, these negatively-charged subatomic particles react differently to stone and other dense matter than other particles. As such, scientists have for decades been using increasingly sensitive detectors to scan the muon content of structures such as pyramids and map the empty spaces.

As the paper notes, the Great Pyramid, which was built for and houses the remains of the pharaoh Khufu in the 26th century BCE, has had muon-scanning experiments done on it twice now — first in the late 1960s by the American physicist Luiz Alvarez, and again from the years 2015 to 2017 during the evocatively titled Scan Pyramids project.

The latter, which unsurprisingly had much more sensitive telescopic detection instruments than the one conducted in the 60s, revealed the existence of two sizeable voids inside the pyramid, including one that archaeologists believe may be a passageway to Khufu's tomb.

The new telescopes, which will be placed around the base of the pyramid because they're too big to go inside of it, will according to the paper have "upwards of 100 times the sensitivity" of the equipment used in the Scan Pyramids project. By scanning muons "from nearly all angles," the team hopes that they will be the first to "produce a true tomographic image of such a large structure."

Beyond just making a more highly detailed map using the giant, uber-sensitive muon telescopes, Bross suggested to Live Science that the mission the researchers are calling the Explore the Great Pyramid (EGP) project may even be able to detect artifacts inside the hidden voids with such detail that they can distinguish the types of material ("pottery, metals, stone or wood") of which they're comprised.

While the project isn't completely ready to go — Bross told Live Science that the EGP mission still needs to secure more funding before it can begin building its telescope, which will take a few years — it is a really fascinating example not only of the intersections of physics and archaeology, but also of the ways science is rapidly improving on itself.

Whether it'll successfully reveal what secrets lie within the Great Pyramid, though, remains to be seen.

Read This Next
Sundowned
Mexico Bans Startup From Future Solar Geoengineering Experiments
Knew It All Along
Exxon Scientists Knew About Global Warming for Decades While Company Denied It
Solar Slay
Solar Powered Machine Turns CO2 and Waste Plastic Into Valuable Fuel
Dim Sun for Breakfast
Startup Says It's Started Releasing Chemical Into Atmosphere to Dim Sun
Hidden City
NYC's Greenery Eats Up All the CO2 From Its Cars, Trucks and Buses "And Then Some"
More on Earth & Energy
From Bad to Worse
Yesterday on the byte
Global Warming Is Worse Than We Thought, AI Tells Scientists
RIP Fred
Yesterday on the byte
Instead of Predicting Length of Winter, Groundhog Simply Dies
Fly Guy
Wednesday on the byte
Bird Advocates Horrified by Pigeon Dyed Pink For Gender Reveal Party
READ MORE STORIES ABOUT / Earth & Energy
Keep up.
Subscribe to our daily newsletter to keep in touch with the subjects shaping our future.
+Social+Newsletter
TopicsAbout UsContact Us
Copyright ©, Camden Media Inc All Rights Reserved. See our User Agreement, Privacy Policy and Data Use Policy. The material on this site may not be reproduced, distributed, transmitted, cached or otherwise used, except with prior written permission of Futurism. Articles may contain affiliate links which enable us to share in the revenue of any purchases made.
Fonts by Typekit and Monotype.