A Gun Company Is Now Selling a Handheld Semi-Automatic Railgun

"It's still a dangerous electrical device, and it's not a toy." 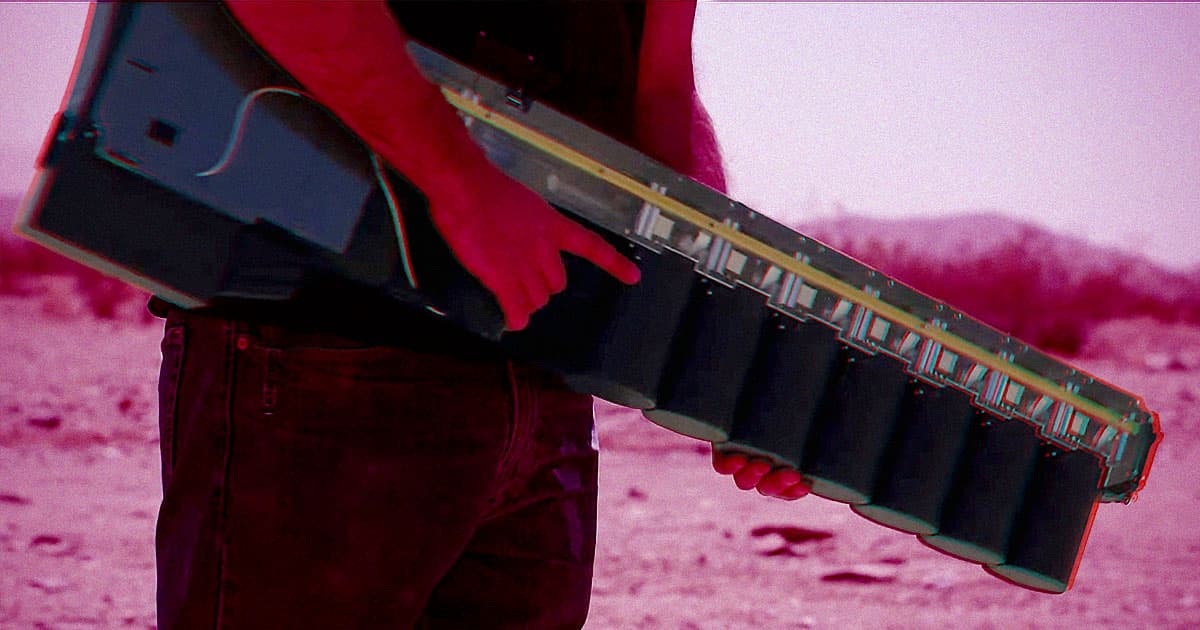 A startup called Arcflash Labs is selling a $3,750 handheld railgun — and it's officially available for preorder now.

The company claims that its GR-1 "Anvil" is the world’s first handheld Gauss Rifle, a type of weapon that uses electromagnetic coils to accelerate projectiles to extremely high velocities, also known as a railgun or coilgun.

So far, railguns have remained mostly a thing of science fiction — who could forget the fearsome weapon in the "Quake" franchise? — but there have been numerous attempts to turn it into a reality. The US military spent half a billion dollars testing and building a ship-mounted electromagnetic railgun that can fire projectiles at hypersonic speeds, for example, before abandoning the project due to technical challenges.

Now, Arcflash has boiled the concept down to a much smaller scale. It says its futuristic, battery-powered handgun is the "most powerful coilgun ever sold to the public" and perhaps even "the most powerful handheld coilgun ever built."

"You can hold far more energy in batteries than you can with gunpowder," Wirth told Futurism. And a battery eliminates the need for "explosive chemical propellants."

But it's an entirely new type of armament that could have some potentially dangerous consequences, opening the doors to turn anything from metal rods to nuts and bolts into deadly projectiles. And its creators are already imagining military applications.

"Imagine a scenario where a military squad is pinned down behind enemy lines and they're out of ammunition," Wirth told us. "With Gauss Rifles they could pitch a solar panel, charge their guns' batteries, and fire nuts and bolts off the ground as ammunition."

It's worth noting, according to the company's website, that these hypothetical soldiers would be in violation of the company's own guidelines which — for now — say Arcflash is "NOT RESPONSIBLE for damage to the unit or personal injury caused by firing non-OEM armatures."

At the moment, though, the company's railgun isn't quite ready for wartime. The futuristic weapon accelerates tiny "ferromagnetic projectiles," smaller than half an inch in diameter, to over 200 feet per second with 75 foot-pounds of muzzle energy.

In other words, it's much less likely to kill somebody than a conventional handgun.

For now at least, according to Wirth, it's a tech demo that's "ideal for collectors, investors, researchers, tinkerers, and those who wish to own a weapon that's free from reliance on mass-produced ammunition."

"It's just an Alpha test," he told Vice.

But that doesn't mean Wirth isn't plotting new applications for the tech, including selling them to cops. One potential feature he told Futurism about would use a rangefinger to adjust the power so that projectiles would hit targets at nonlethal speeds.

"This might not be as useful for military applications, but it vastly improves the safety and reliability of less-lethal projectiles for law enforcement," Wirth said.

"The scalable effects of a Gauss Rifle would allow law enforcement to fire rubber bullets at a speed proportional to their distance to target, so they're less likely to injure someone if they're close and more likely to reach the intended target if they're far away," he added.

For now, anybody willing to shell out close to $4,000 for a GR-1 will have to sign a liability waiver. According to Wirth, the company ran the GR-1 through an independent safety review and extensive testing.

"However, even with all of these safety precautions and testing, there are still 'unknown unknowns,'" Wirth told Futurism, noting that "it's still a dangerous electrical device, and it's not a toy."

The company is also operating in a bit of a regulatory void. Several US states have laws that forbid the sale of electronic accelerators like the GR-1.

Consequently, Arcflash lists a number of states, counties, and even individual cities which it won't ship to as a result of local laws.

The rollout of the GR-1 is an interesting inflection point for the sale of armaments, vaguely reminiscent of the rise of 3D printed guns — the democratization of gun ownership, whether within or outside the scope of government regulation. One allows practically any piece of metal debris to be turned into a bullet. The other allows anybody with an off-the-shelf 3D printer to manufacture their own gun parts.

And that all raises the question: if it's not a toy and not a conventional handgun either, what is it? The company is aiming to get an entirely new and rapidly evolving type of weapon into the hands of the public. Whether that's a good idea, or a disaster waiting to happen, remains to be seen.

Read This Next
Futurism
Photos Suggest China Might Have a Hypersonic Railgun
Futurism
Dasvidaniya! Russia Successfully Tests New Weapon That Can Blow Away Any Type of Armor
Futurism
This amateur maker created the first-ever fully functional 3D-printed railgun
More on Robots & Machines
FROM THE DEPT. OF...
Yesterday on futurism
Byte-Sized Review: LG CineBeam Is a Premiere-Worthy But Pricey Home Projector
FROM THE DEPT. OF...
Yesterday on futurism
Best Drones Under $100 in 2022
FROM THE DEPT. OF...
Yesterday on futurism
Best Karaoke Machines for 2022
READ MORE STORIES ABOUT / Robots & Machines
Keep up.
Subscribe to our daily newsletter to keep in touch with the subjects shaping our future.
+Social+Newsletter
TopicsAbout UsContact Us
Copyright ©, Camden Media Inc All Rights Reserved. See our User Agreement, Privacy Policy and Data Use Policy. The material on this site may not be reproduced, distributed, transmitted, cached or otherwise used, except with prior written permission of Futurism. Fonts by Typekit and Monotype.