The reactor got more than 10 times hotter than the core of the Sun. 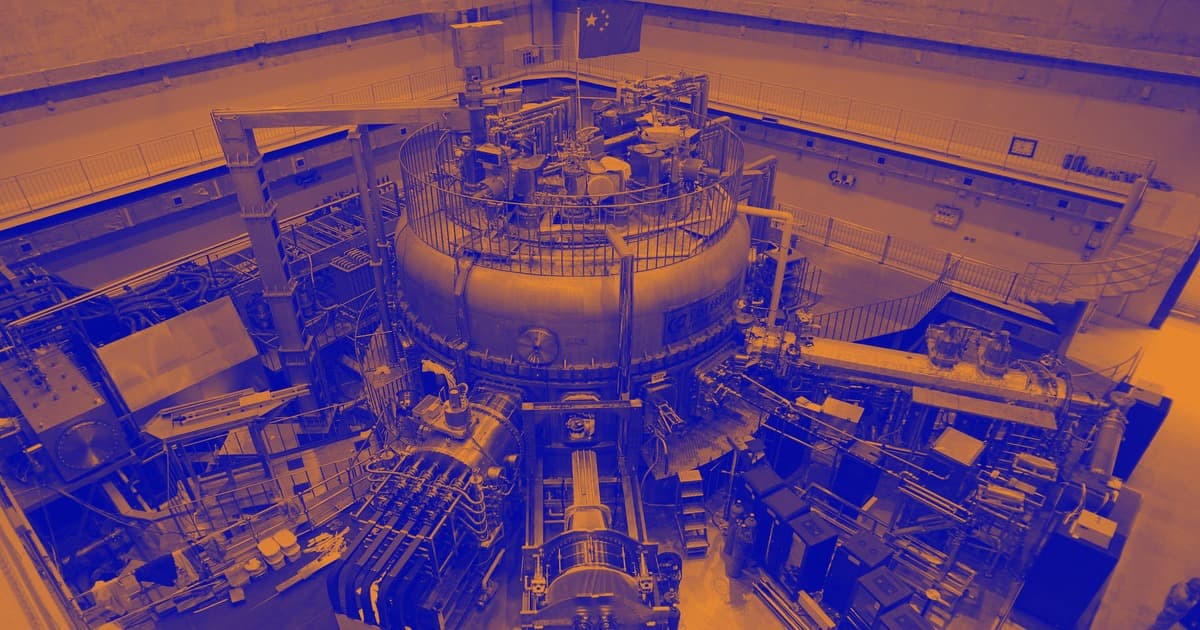 Image by CFP via CGTN

Is it hot in here, or is it just the fusion reactor?

For perspective, the core of our solar system’s Sun "only" reaches about 15 million degrees Celsius, according to Space.com. So, for a moment, EAST got more than 10 times hotter than that.

This marks a big milestone for the EAST reactor, which has been dubbed the "artificial Sun" for its ability to replicate the natural nuclear fusion process of stars. Doing so could help unlock the mystery to creating sustainable, reliable fusion power.

"The breakthrough is significant progress, and the ultimate goal should be keeping the temperature at a stable level for a long time," said Li Miao, the director of the department of physics at the Southern University of Science and Technology in Shenzhen, China, to the Global Times.

The reactor's most recent feat is especially impressive considering that the EAST reactor had previously reached a record temperature of 100 million degrees Celsius in 2018. Now it’s smashed that number and then some.

Lin Boqiang, the director of the China Center for Energy Economics Research at Xiamen University, told the Global Times that nuclear fusion ultimately represents the future for clean energy — though he stressed that it's likely going to be decades before a working reactor emerges from experimental stages.

Regardless of when fusion reactors finally goes beyond experiments, this development is still incredibly exciting — and represents just another big step forward to making unlimited clean energy a reality.

More on EAST: China: New “Artificial Sun” Will Be Completed This Year

Read This Next
Fusion vs Fiction
Gloomy Physicists Say Nuclear Fusion Breakthrough Is Too Late to Save Us
Net Gain
Physicists Say New Breakthrough Proves Fusion Power Is Possible
Fusion Force
China Announces Plan for Hybrid Fission-Fusion Power Facility
Hurricane Season
Oops! Fusion Facility Keeps Failing to Recreate Last Year's "Breakthrough" Record
Smashing Atoms
Startup Says It's Honing in on Simple Solution for Practical Fusion Power
More on Earth & Energy
Cow Chow
Yesterday on the byte
Bill Gates Gives $12 Million to Flatulent Australian Cows
Dye in the Water
Yesterday on the byte
Scientists Dye Chunks of Ocean Water Pink for Head-Turning Coastal Experiment
Face/On
Yesterday on the byte
Scientists Found a Dinosaur's Face, Complete With Its Skin
READ MORE STORIES ABOUT / Earth & Energy
Keep up.
Subscribe to our daily newsletter to keep in touch with the subjects shaping our future.
+Social+Newsletter
TopicsAbout UsContact Us
Copyright ©, Camden Media Inc All Rights Reserved. See our User Agreement, Privacy Policy and Data Use Policy. The material on this site may not be reproduced, distributed, transmitted, cached or otherwise used, except with prior written permission of Futurism. Articles may contain affiliate links which enable us to share in the revenue of any purchases made.
Fonts by Typekit and Monotype.