Tian Kun Hao is being pitched as a "magic island maker." 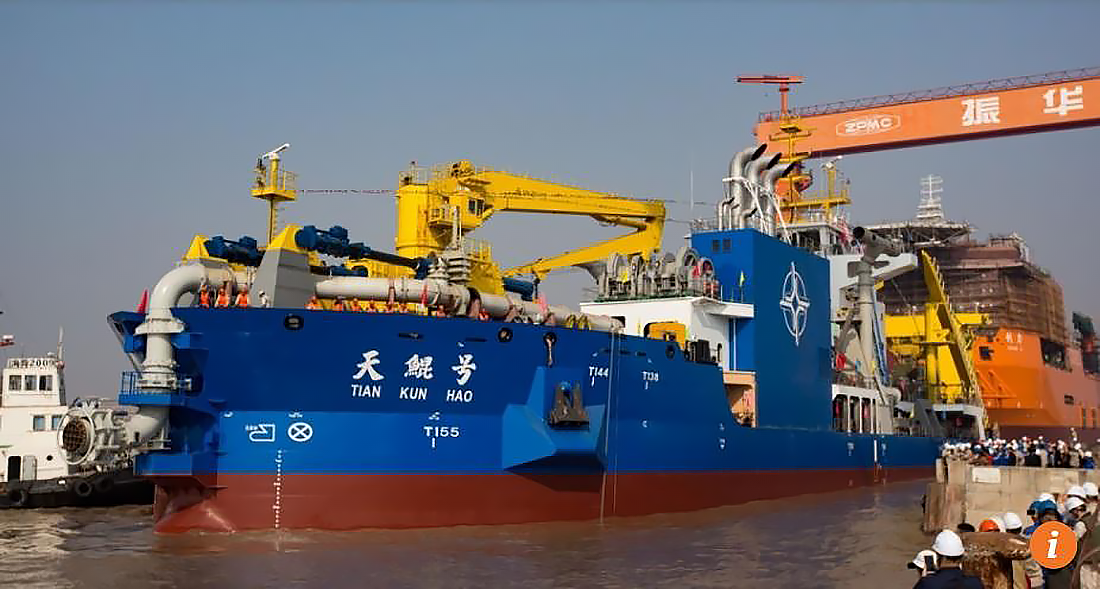 Reports from Chinese state media have revealed the purpose of a huge ship constructed in the country, which is being billed as a "magic island maker." The boat, named Tian Kun Hao, is apparently Asia's largest dredging vessel.

Tian Kun Hao is a larger version of the ships China has used in the past to create artificial islands in the South China Sea. This new vessel is capable of digging at a rate of 6,000 cubic meters per hour, which is roughly equivalent to three standard swimming pools.

Artificial islands are produced by digging up enormous quantities of sand, then depositing the matter over an existing island, an appropriate rock formation, or even a coral reef. With this process it's possible to construct a landmass capable of supporting the likes of military bases and air strips.

This practice has been used extensively by China, and is also popular in Dubai (the Palm Jumeirah archipelago being a particularly well-known example of the technique). However, similar efforts to modify a landmass are popular all over the world: certain estuaries in the U.S., Europe, and Australia have had over 50 percent of their coastline augmented with artificial structures.

Despite China's eagerness to construct artificial islands, there have been various criticisms leveled at the practice. These concerns go beyond the country's contentious claims to the areas of land, as well as its tendency to ignore criticism of the resulting military facilities, which have been raised by the U.S. and others.

For one, there are concerns that the landmasses might not be particularly stable. Recent reports have indicated that a set of artificial islands in Dubai designed to resemble the world map (a project carried out by the developer behind the Palm Jumeirah archipelago) has been degrading since as far back as 2011.

Meanwhile, there are serious concerns about what effect the process of building out into the water may have on existing ecosystems. To that end, it's been argued that constructing artificial islands is a new form of urban sprawl.

Artificial islands could potentially provide space to meet the agricultural and residential needs of our growing populations. However, it's crucial that we use this technology with the proper care and consideration.

Whether we're talking about land or sea, unchecked construction can cause massive harm to the surrounding ecosystem. There are alternatives, however, like building floating cities or even heading underwater, which could turn out to be more ecologically viable.

Read This Next
Quantum Supremacy
US Sanctions Chinese Quantum Computing Firms for... Reasons
Quantum Solutions
Chinese Scientists Say They Now Have the World's Most Powerful Quantum Computer
Rock 'Em Sock 'Em
The Head of US Space Command Fears China's Giant Robot Arms
Killer Robot Ships
The U.S. Navy Wants to Roll out Autonomous Killer Robot Ships
Futurism
Those Mysterious Attacks In Cuba Probably Involved Weaponized Microwaves
More on Robots & Machines
From the Dept. of...
12:00 AM on futurism
The Best Wireless Mouse of 2023
Balloon Boy
Yesterday on the byte
Other Chinese Balloons Apparently Flew Over America, But Nobody Noticed Them
From the Dept. of...
Yesterday on futurism
The Best Earbuds Under $50 in 2023
READ MORE STORIES ABOUT / Robots & Machines
Keep up.
Subscribe to our daily newsletter to keep in touch with the subjects shaping our future.
+Social+Newsletter
TopicsAbout UsContact Us
Copyright ©, Camden Media Inc All Rights Reserved. See our User Agreement, Privacy Policy and Data Use Policy. The material on this site may not be reproduced, distributed, transmitted, cached or otherwise used, except with prior written permission of Futurism. Articles may contain affiliate links which enable us to share in the revenue of any purchases made.
Fonts by Typekit and Monotype.