Travels up to 105 miles on a single charge. 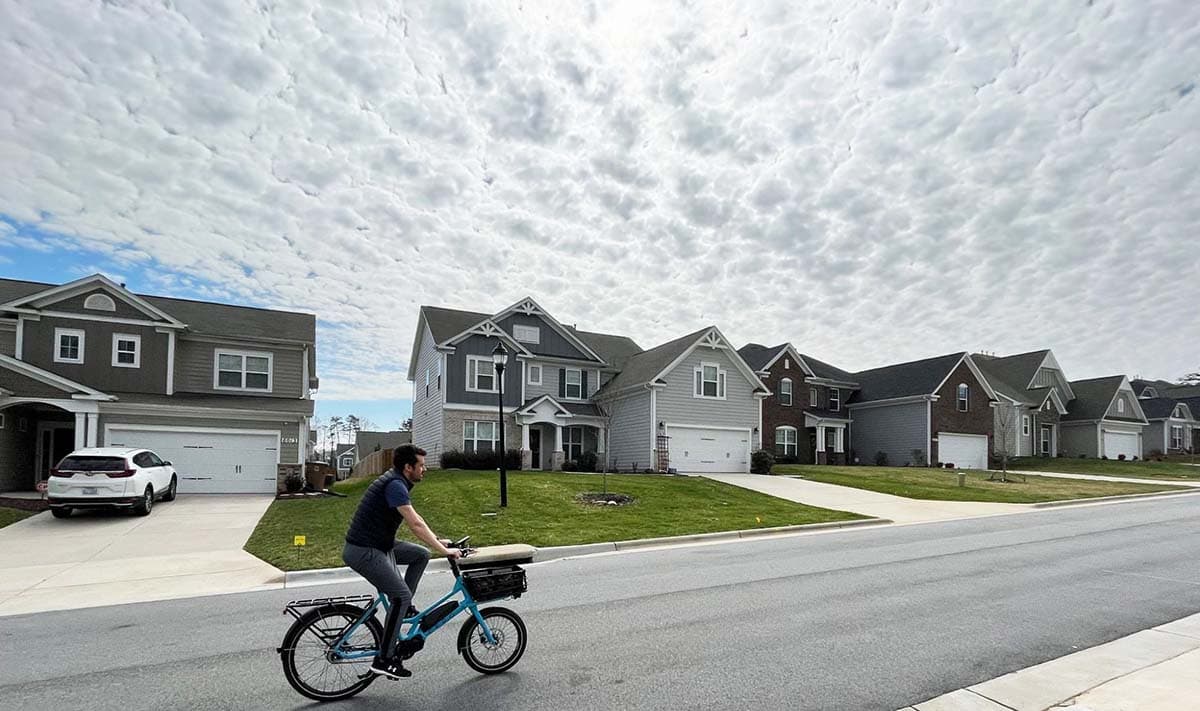 Commuting to work on two wheels is growing in popularity with more and more cities adopting bike lanes and greenways as part of their urban plans. In fact, from 2000 to 2019, the U.S. saw a 61 percent increase in the number of commuters biking to work.

Ebikes, which make it easier to go farther than ever on a bicycle, are no small part of that increase. I spent the past few weeks testing an ebike that’s part of the movement to get more people out of their cars and on bicycles — the CERO One.

The CERO One functions as a jack-of-all-trades ebike that’s as at home running errands to the grocery store or hauling kids to preschool as it is commuting to work Monday through Friday or touring the local greenways on the weekends.

CERO was founded in 2015 by CEO Kiyoshi Iwai, who was inspired by the Japanese Mamachari (“mom bike”), the wildly popular cargo/commuter ebike that features a combination of large baskets and child seats.

As with any bike you order directly from the manufacturer, the CERO One requires some assembly upon arrival. Specifically, this involves installing pedals, mounting storage racks, aligning the handlebars, and attaching the front wheel. All told, it took about an hour to get the CERO unboxed and ready to ride.

And though I have a fair amount of experience working on bikes, even newbies should feel confident putting the CERO One together. All the tools needed to get the job done come with the bike, and CERO offers a user-friendly assembly video on YouTube.

The CERO One uses the Shimano STEPS system, which smoothly engages as the rider pedals to provide power assistance up to 20 m.p.h.

There are three power-assist options: max, normal, and eco (low assist), which the rider can cycle through on the fly via a rocker button located on the left handlebar. Shifters for the CERO One’s five gears are located on a shifter on the right handlebar.

The computer mounted to the center of the handlebars displays important travel metrics, including speed and distance and current power assist level, battery life, and an estimate of how much further you can go before the high capacity lithium-ion battery will need a recharge.

Getting Up To Speed

While ebikes are notably heavier than a standard bike, the CERO One tips the scales at a hefty 58 pounds. A standard commuter ebike weighs around 45 to 50 pounds. As such, I was skeptical about how quick the bike would feel.

Those fears were rapidly laid to rest. Set to max assist, I ascended a moderate hill in my neighborhood at a fast clip of 17 m.p.h. with minimal effort. While the power assist is noticeable when it engages, the acceleration is smooth with no jerking. Applying the same effort in the normal and eco settings yielded slower though still impressive climbing speeds of around 15 m.p.h at an easier gear while exerting the same effort.

Once on a flat stretch of road, I found myself reaching that 20-m.p.h. top power-assist speed easily while in Max. Normal mode required more effort, but I still felt well within my physical limits while still achieving speeds of more than 18 m.p.h.  Even setting the power assist on eco mode provided ample assistance for maintaining lower speeds of 16 or 17 m.p.h. with low to moderate effort.

Handling the Cero One

Given the bike’s weight, I expected its handling to be a bit cumbersome. Not so. The combination of the smaller 20-inch front wheel and 26-inch rear wheel gives the CERO One very smooth handling. I found it easy to execute sharp turns or quickly change my line to avoid unexpected potholes. The CERO One’s beefy Schwalbe Big Ben Plus tires do an excellent job of absorbing rougher terrain while inspiring confidence that the bike won’t slide or skid while turning.

CERO says the One can fit a wide range of sizes, from 5-feet 2-inches up to 6-foot 4-inches simply by changing the seat height. While I can’t vouch for the top end of that range I can say my wife, who is 5 feet, 2 inches tall, and myself, at 5 feet, 11 inches tall, both comfortably fit on the bike and found it easy to maneuver.

The CERO One’s battery attaches to the inside of the bike’s down tube. A key locks the battery to the frame, an excellent option for those who don’t want to leave that expensive battery vulnerable while shopping at the grocery store or lug it inside with them. There’s also a rear wheel lock for securing the bike itself.

Once unlocked, the battery unclips from the frame, making it easy to tote to one’s office to charge for the afternoon commute, not that you’d need to, given the battery's range. CERO claims the One has a 105-mile range in eco mode. While I didn’t have time to test to that range, the battery only dropped a single bar even after days of test rides. Lessen your environmental impact further by using some of the best rechargeable batteries.

A cargo bike should be able to carry a fair amount of stuff and the CERO One doesn’t disappoint. My CERO came equipped with a “small” basket, which at 8.8 inches wide, 7.6 inches tall and 15.5 inches long, offers ample storage space. And since the CERO One uses a 20-inch front wheel, the basket sits low on the front, ensuring even taller items you might load into it won’t block your view.

You might think such a large front rack would make the bike feel top-heavy. It doesn’t. The smaller wheel places the rack and its contents at a low center of gravity, making it easy to balance even heavier loads.

Even after loading the rack with a couple of 15-pound dumbbells, the bike still felt balanced and stable. The CERO One is also available with two other front rack options, including a larger basket that’s twice as wide or a simple platform rack that’s suitable for strapping on items that won’t fit in a basket, such as a large box.

The CERO One also features a rear rack that allows you to strap on more gear or really go crazy and add panniers for even more cargo-carrying capacity. A large center stand serves as a sturdy base that keeps the CERO One upright while parked, which is particularly handy while loading or unloading cargo.

In keeping its cargo-friendly design, the Cero One’s top bar is low enough that mounting the bike doesn’t require me to lean it to the side as I would some commuter bikes. This not only ensures loose cargo loaded into the Cero’s baskets doesn’t roll into the street as I’m climbing aboard but also makes mounting the bike in a pair of jeans or even dress pants comfortable since there’s no need to throw one’s leg over a high bar.

Ready for the Daily Commute or Weekend Fun

While the CERO One has formidable cargo-carrying capabilities, it also comes with features that make it a very capable commuter bike. While I didn’t get a chance to ride the bike in rainy weather, I’m confident that the fenders that wrap around the front and back wheels offer enough coverage to keep the tires from spraying the rider with road grime. The CERO One also eschews the standard bike chain for a greaseless belt, ensuring you won’t head into the office with grease on your pant leg.

Though the CERO One can haul an impressive payload, it doesn’t ride like a lumbering cargo bike. The combination of a 20-inch front wheel and 26-inch back wheel coupled with a frame that puts the rider in a more aggressive position than your standard cargo bike gives the CERO One a sportier feel (think sedan versus work van).

This doesn’t just make it zippy enough for a daily commute. The CERO One is just plain fun to ride whether you’re heading to the store, work, or out for a ride on the local greenway. For more options, check out our guide to the best ebikes.

Should You Buy the CERO One?

While the CERO One is affordable by ebike standards at $3,799, it’s still an investment for most people. So, it’s good to know that the bike can serve multiple purposes. It’s well equipped for running errands or commuting while still being a lot of fun for recreational use.