Go easy on your peepers. 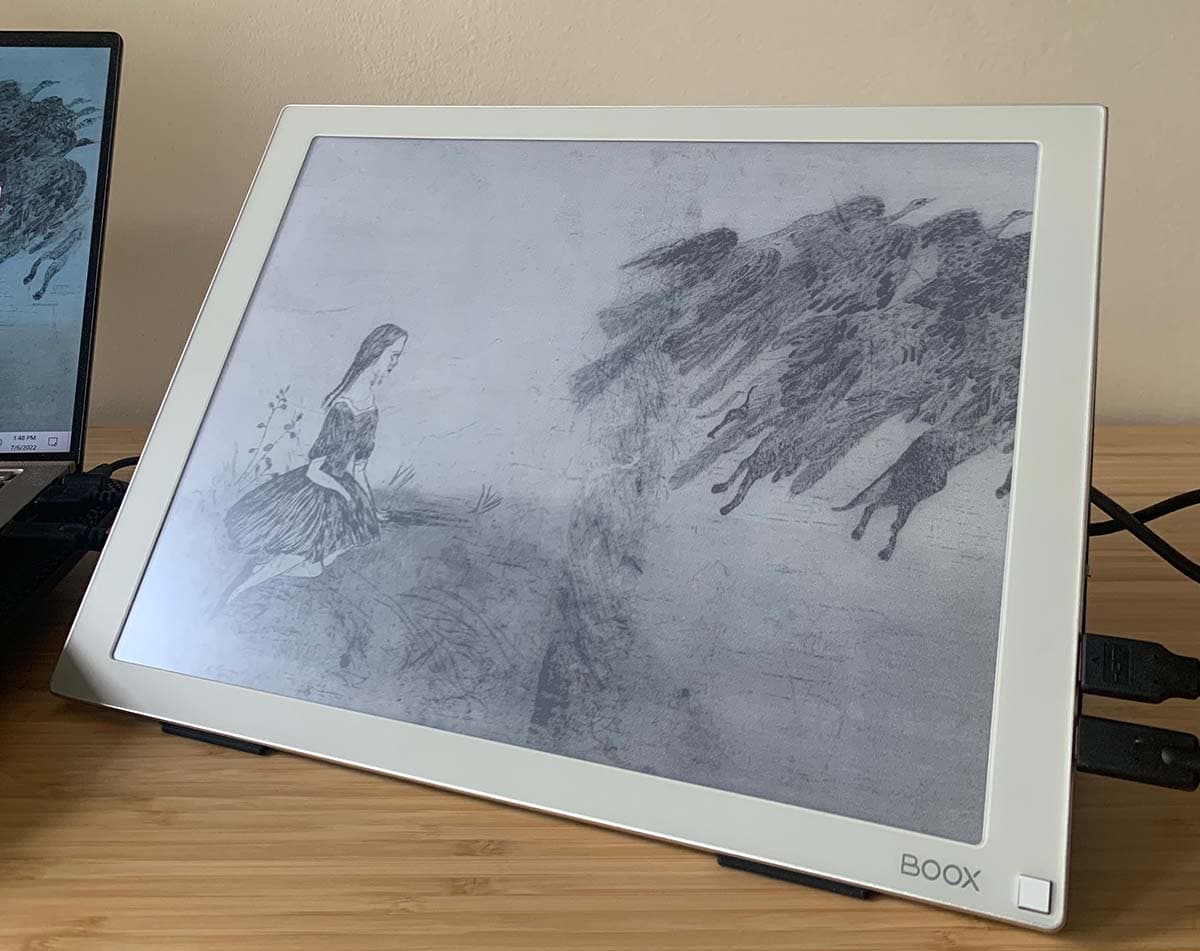 So many of us spend our days gazing into an array of LEDs. We click and type all day for work, and then unwind to the blue-lit drama of a TV show after dark. By the end of our workday, our vision is bleary and our eyes feel fatigued, while our distance vision is unfocused and fuzzy. What if there was a screen out there that didn’t leave you with that runny-pupil feeling? The Boox Mira E Ink monitor aims to help remedy digital eye strain. The Mira is a black-and-white E-Ink display that connects to your computer. Instead of displaying an image using LEDs, it uses charged microcapsules that fill with an electrically responsive ink to create images. This yields a display that’s easy on the eyes, uses little electricity, and is great for long days of reading and writing.

The Boox Mira is an E Ink monitor for your computer, with touch functionality, a folding cover that doubles as a stand, and rear sockets that enable it to screw onto a Vesa mount.

E Ink is actually a brand. The technology was developed at MIT in the mid-1990s, and appeared on a cover on Nature Magazine. The technology uses microcapsules, which when charged, fill with an electrophoretic ink. For those unfamiliar with the word electrophoretic, it means that this ink is responsive to charge in an electromagnetic field. When charged, the microcapsules intake or outtake ink to become black or fade to white.

E Ink was famously used in the Amazon Kindle, which made great use of its low-energy requirements and superior eye-ergonomics. Originally concepted as a solution to make a low-power paper-like display that could be used to make an electronic book, it was a natural fit for an eReader. E Ink’s application in the BOOX Mira only expands on it.

Most importantly, E Ink technology is better for your eyes. LEDs are all around us and they're (almost certainly) not good for our eyes. Researchers at Key Laboratory Weifang Medical University found that “blue light, with relatively high energy, can cause irreversible photochemical damage to eye tissue.” In a study published in Nature, it has been shown that blue light shortens lifespans in some organisms, However, other studies, such as this American Academy of Ophthalmology report, have found that blue light isn’t so damaging, but advocate for simple solutions to reduce eye strain instead, such as looking into the distance every 20 minutes.

While there is debate as to just how bad LED monitors are on our eyes, for many of us, our lived experience suggests that our eyes definitely do hurt from long sessions looking at an LED screen. E Ink monitors reduce this eye strain to a level that's commensurate to reading a book or working on a type-writer.

Personally, I had long hoped for a technology like the Boox Mira. Because of this, I was very excited to get my hands on one to test it out.

The Mira plugs into your computer using an HDMI input in tandem with a USB-C. I use an Asus Zenbook which includes a USB-C of average power (approximately 10 Gbps transfer speeds), which is substantially less speedy than the road-runner class Thunderbolt ports you'll find on a Macbook. My system has some connection latency. If I'm recording in Ableton in DirectX I have to correct for about 130 milliseconds of latency on my Focusrite Scarlett. On a Wacom Cintiq Pro 16 (which uses the same HDMI / USB-C connection) I experience a slight pen-lag when I'm drawing fast. This same lag is here on the Mira, when I move my mouse quickly the pointer trails where I expect it to be by about 1.75 inches. I mention all this because some of the latency I experience with the Mira is due to my computer's latency (which isn't Mira's fault). However, the latency is there, and it can be distracting. Unless you're running a system with a near-zero latency connection, you will likely experience latency on your Mira.

The Mira uses a somewhat odd resolution of 1400 x 1050 at first. When you plug in the display you'll see your main screen mirrored in a small size with black borders to the top and bottom. This goes away with calibration, becoming a comfy 2,200 x 1,650 size that's actually really nice for an office document in Word, Google Docs, or OpenOffice. It's not as wide as my laptop monitor, but the depth suits writing well. The resolution isn't great for images, but the monitor isn't really meant for that anyway. For word processing, it's a fine resolution that strikes a balance between detail and refresh rate.

The Boox Mira E Ink Monitor offers a few interface options. A square button on the bottom right delivers an instant refresh of the screen that sweeps away the almost omnipresent gray ghosting that fills the white space as you scroll through a document.

A small knob on the right side allows you to cycle settings, while a button on the left summons up the setting menu, all of which are controllable by touch. In my experience, the left button is somewhat redundant as the menu pops up immediately when you trigger the knob on the right. In practice, the settings menu seems to be the best way to tune this screen, whether you're adding brightness, tweaking the refresh speed, or changing preset modes. I find myself using the refresh button consistently, but otherwise, the settings menu's broad applicability makes it an easy place to go to tweak the screen to your needs.

Testing it out, the touch screen isn't all that relevant. So far I have been unable to program it to accept simple touch commands like a two-finger scroll. Pinch zooming is similarly unavailable except in specific programs that allow it like Adobe Fresco. The device clicks and right-clicks with ease, but without an easy scroll feature touch, it just really isn’t that useful. Hopefully, Mira will update this.

As it is, I would rather have seen faster screen refresh times and no touchscreen. Since this tech is leagues more useful for text editing than any sort of image editing, the touch mostly serves as an alternate way to select the text, so in my experience, I think that a cheaper option without touch would be a better value.

Testing for Daily Use

This screen makes itself useful in a word processing suite or for reading. With no illumination, the Text setting still gives you enough contrast to comfortably work from. Read mode is great for reading e-books, but makes my mouse annoyingly laggy. You can see everything decently well with no illumination if you use a side lamp. Using a word processor, I consistently feel that my eye strain is lessened using the Mira.

Even with the built-in illumination on, I feel that my eyes relax when using the Mira in comparison to my laptop. That’s because the Mira’s illumination is achieved through reflective illumination rather than projected illumination, meaning even when the light is on all the way, light is not projected through the screen at your eyes, as it would be on an LED monitor.

However, the Mira’s benefits do require sacrifices. Depending on the settings, grays can be hard to see and somewhat confusing to navigate with this monitor. Bolds don’t always pop out, and in some settings (such as Read Mode) the light gray background in Google Docs is indistinguishable from the page, prioritizing clear text rather than anything else (the text in Read mode is very clear). This means that surfing the web on multiple settings isn't quite comfortable, and gaming, photo editing, and video are basically all out. If I'm researching an article in my internet browser, I find myself using my standard monitor, then typing on the Mira.

As I’ve incorporated it into my workflow, I’ve mostly used the Mira as a side monitor, dropping my OpenOffice window into the Mira, and keeping my browser open on my laptop. I think it’s generally true that for writers working in multimedia, this is best used as a supplementary screen. It's not a replacement, but it is a good eye break and focus monitor.

I wanted to love the Boox Mira, but after a few weeks of use I think that the device is a mixed bag, both with fantastic qualities, and a few snags. It’s great when I lock in on Google Docs or OpenOffice for a few hours, and I leave that session with my eyes feeling much better than they would on my LED monitor, but its slow refresh times, ghosting, and somewhat confusing grayscale-contrast makes it hard to use for anything beyond typing and e-book reading.

I recommend buying this monitor with a good external keyboard. I find that when I use it next to my laptop, my eyes naturally attract to my bright laptop screen instead. This monitor is best used when you’re able to push your laptop away and focus exclusively on the document you have on your Mira.

I think that the Mira is a good buy as a supplementary monitor for writers and readers who spend all day in a word processing suite and are worried about LED damage to their eyesight. With its high price and technological limitations, I don't think this screen is for everyone. As Boox continues to develop this technology, it has the potential to become truly incredible, with lagless performance, useful built-in touch commands, and faster refresh times. As it is however, I think this display amounts to a technical eyesight health monitor. Its drawbacks will outweigh its benefits for all but the eye strain-focused productivity user.

Still, eyesight damage from LED monitors is a real risk of the trade, and this technology is a capable tool for dealing with that specific concern. Considering that the cost of an eye exam with prescription lenses can often run into the many hundreds of dollars, and the eye-saving benefits of this monitor will make its hefty price point sound far more economical. If you need a real eye health monitor now, then the Boox Mira E Ink Monitor is worth a buy. All my friends who work on computers complain about eye strain, and I think that the Book Mira is currently about the best tool we have to deal with it.