The future of cars, as seen through the eyes of luxury automaker BMW, is impressive - to say the least. 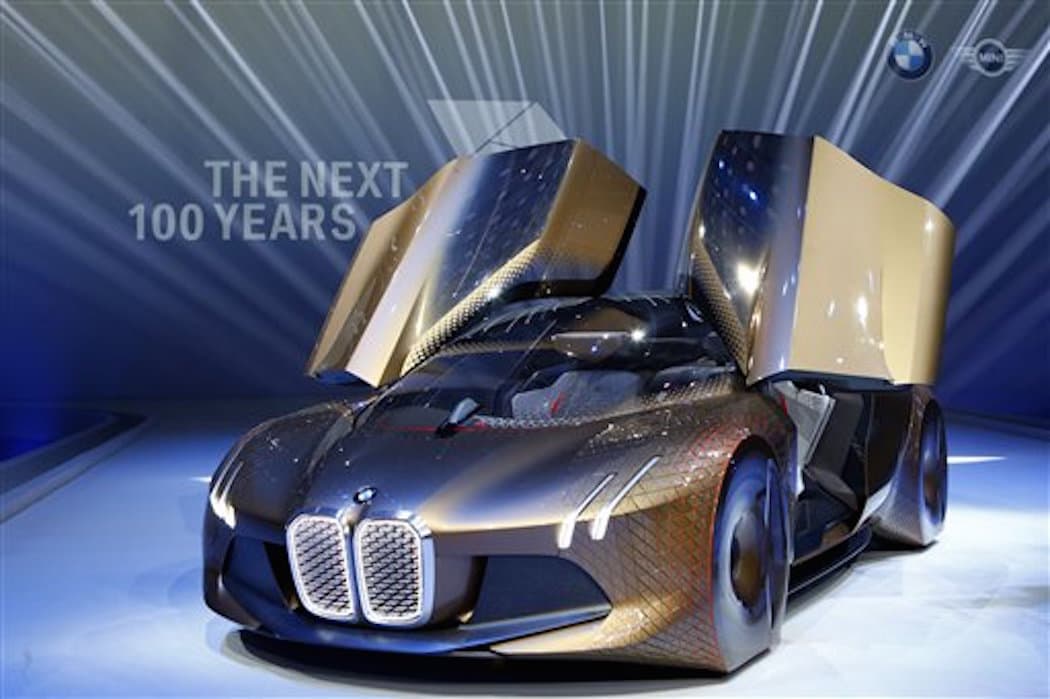 Just in time for the company’s 100th birthday, BMW unveils their vision of what a car should be—sleek, high performance, and built with the ability to take control.

The remarkable concept vehicle has a staggering 800 shape-shifting triangles. These are organic LEDs that function as moving inserts. They are set into the instrument panel and are also in the side panels on the outside. BMW calls them "Alive Geometry,"and they are meant to allow the car to communicate with the driver.

In the design, drivers can choose driver-controlled operations, where the car provides the ideal driving line and speed, or opt for autonomous mode, where the steering wheel will retract and the driver’s seat can swivel to face the front-passenger seat to face each other.

The design illustrates a seamless transition between self-driving operation and drivers piloting the vehicle themselves.

"Depending on the driving mode, the focus of the vehicle changes, concentrating on essentials for the driver in Boost mode, and the surroundings and atmosphere in Ease mode, highlighting the impressive landscapes or buildings of interest that the car is passing by, for instance," said BMW design head Adrian van Hooydonk.

The car also features a windshield that is actually an interactive digital display.

Like the name implies, BMW’s concept car illustrates their vision of the future of cars, especially within the context of a world slowly adopting driverless technology.

"If, as a designer, you are able to imagine something, there's a good chance it could one day become reality," adds BMW. "So our objective with the BMW Vision Next 100 was to develop a future scenario that people would engage with."

BMW now plans to send the Vision Next 100 on a world tour. This will include stops in the UK, China, as well as the US.

In addition, more Vision concepts will be introduced from brands under the German manufacturer as well, including the MINI, Rolls Royce,

Read This Next
Futurism
Your Car is Getting a Co-Pilot: BMW Will Have Echo Integration By 2017
Futurism
New Digital Mirrors May Render Side Mirrors Obsolete (Finally!)
More on Robots & Machines
From the Dept. of...
Yesterday on futurism
The Best Mini Fridges of 2023
Blow Up Doll
Monday on the byte
Ukraine Accuses Russia of Using Inflatable "Dummy Tanks," Which Deflated
FROM THE DEPT. OF...
Monday on futurism
The Best Compost Toilets of 2023
READ MORE STORIES ABOUT / Robots & Machines
Keep up.
Subscribe to our daily newsletter to keep in touch with the subjects shaping our future.
+Social+Newsletter
TopicsAbout UsContact Us
Copyright ©, Camden Media Inc All Rights Reserved. See our User Agreement, Privacy Policy and Data Use Policy. The material on this site may not be reproduced, distributed, transmitted, cached or otherwise used, except with prior written permission of Futurism. Articles may contain affiliate links which enable us to share in the revenue of any purchases made.
Fonts by Typekit and Monotype.