The vision of returning American astronauts to the Moon by 2024 is looking more real than ever. 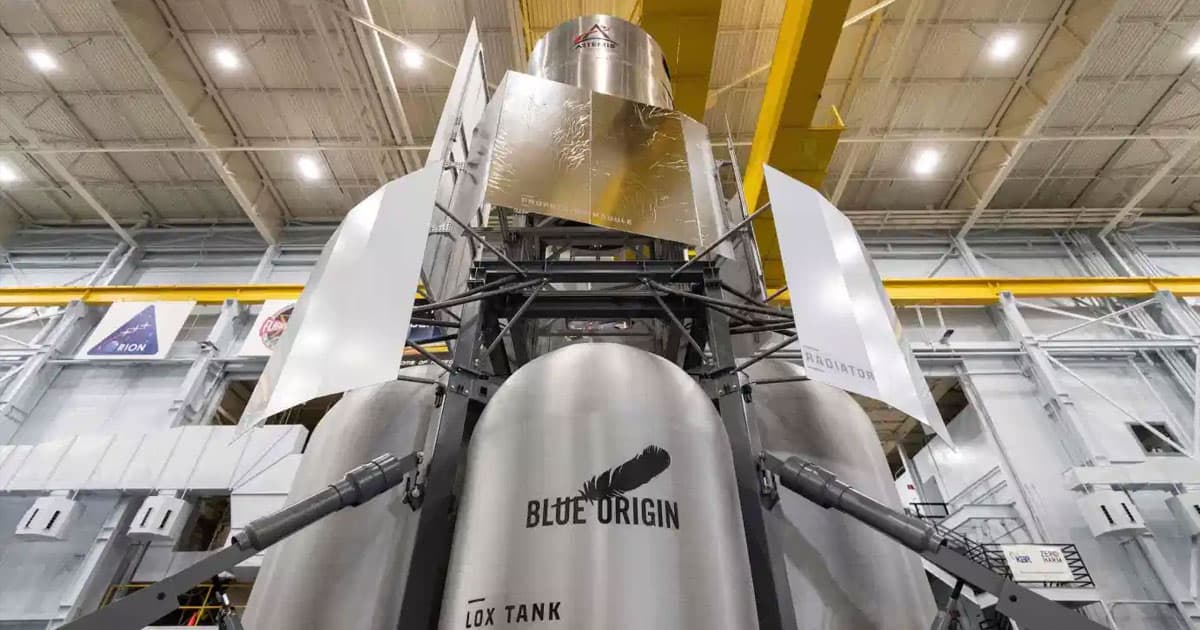 The Blue Origin-led Human Landing System (HLS) National Team just delivered to NASA a full-scale prototype of a lander that could one day carry American astronauts to the surface of the Moon.

The 40-foot, full-scale mockup is made out of two different components: the Ascent Element (AE) and Descent Element (DE). The mockup will primarily serve as a platform to test out crew operations, i.e. how to get astronauts, equipment and supplies off and on the vehicle.

It could also help the teams at NASA to evaluate things like cabin ergonomics, viewing angles from the cabin, and what the experience is like entering and leaving the vehicle while wearing a bulky spacesuit, according to SpaceNews.

"The most interesting part of doing this kind of mockup assessment is finding the stuff that you didn’t think of," Brent Sherwood, vice president of advanced development programs at Blue Origin, told SpaceNews. "There are going to be surprises that are revealed by this kind of physical environment, when you can be in it and see it and feel it."

In April, NASA awarded contracts to three companies as part of its human landing systems (HLS) project. Apart from Blue Origin, which scored by far the biggest chunk of the total $967 million, Alabama-based aerotech company Dynetics as well as SpaceX were also awarded $253 million and $135 million respectively.

SpaceX was awarded funding to develop the Starship, a massive spacecraft meant to carry astronauts to the Moon's surface using the company's Super Heavy rocket.

A next round of contracts are due in late fall. It's still unclear how many landers NASA will be able to support, especially considering a tight budget squeeze. "All we can control is the work that we need to do," Sherwood told SpaceNews.

"Testing this engineering mockup for crew interaction is a step toward making this historic mission real," Sherwood said in a statement. "The learning we get from full-scale mockups can’t be done any other way."

In addition to Blue Origin, the project is a collaboration with a number of other avionics heavyweights, including Lockheed Martin and Northrop Grumman, each of which are drawing experience from a number of other projects, including NASA's deep-space Orion vehicle and Northrop Grumman's Cygnus vehicle, an expendable aircraft that has resupplied the International Space Station.

This is only the start; Blue Origin still has its work cut out before the lander will get even close to launching, including the development of the rocket engines powering the different stages.

Read This Next
Carbon-Based
NASA Rover Finds New Potential Evidence for Ancient Life on Mars
So Long
Tragedy! NASA Says the Voyager Space Probes are Powering Down
Expect Delays
Scathing Report Admits NASA Is Years Behind Moon Landing Schedule
Uh Oh
Something Very Bad Might Be About to Go Down at NASA
Astronaut Drip
We Just Got the First Peek at NASA's Artemis Moon Landing Suits
More on Off World
Gifts For Mom
Yesterday on the byte
Jeff Bezos Ditches Plan to Land Rockets on Ship Named for His Mom
space salad
Yesterday on the byte
NASA Astronauts Harvest Delicious Space Vegetables, Sans Soil
Going Down
Jun 25 on the byte
Scientists Say the Sun Is Acting Up and Causing Satellites to Fall Back to Earth
READ MORE STORIES ABOUT / Off World
Keep up.
Subscribe to our daily newsletter to keep in touch with the subjects shaping our future.
+Social+Newsletter
TopicsAbout UsContact Us
Copyright ©, Camden Media Inc All Rights Reserved. See our User Agreement, Privacy Policy and Data Use Policy. The material on this site may not be reproduced, distributed, transmitted, cached or otherwise used, except with prior written permission of Futurism. Fonts by Typekit and Monotype.