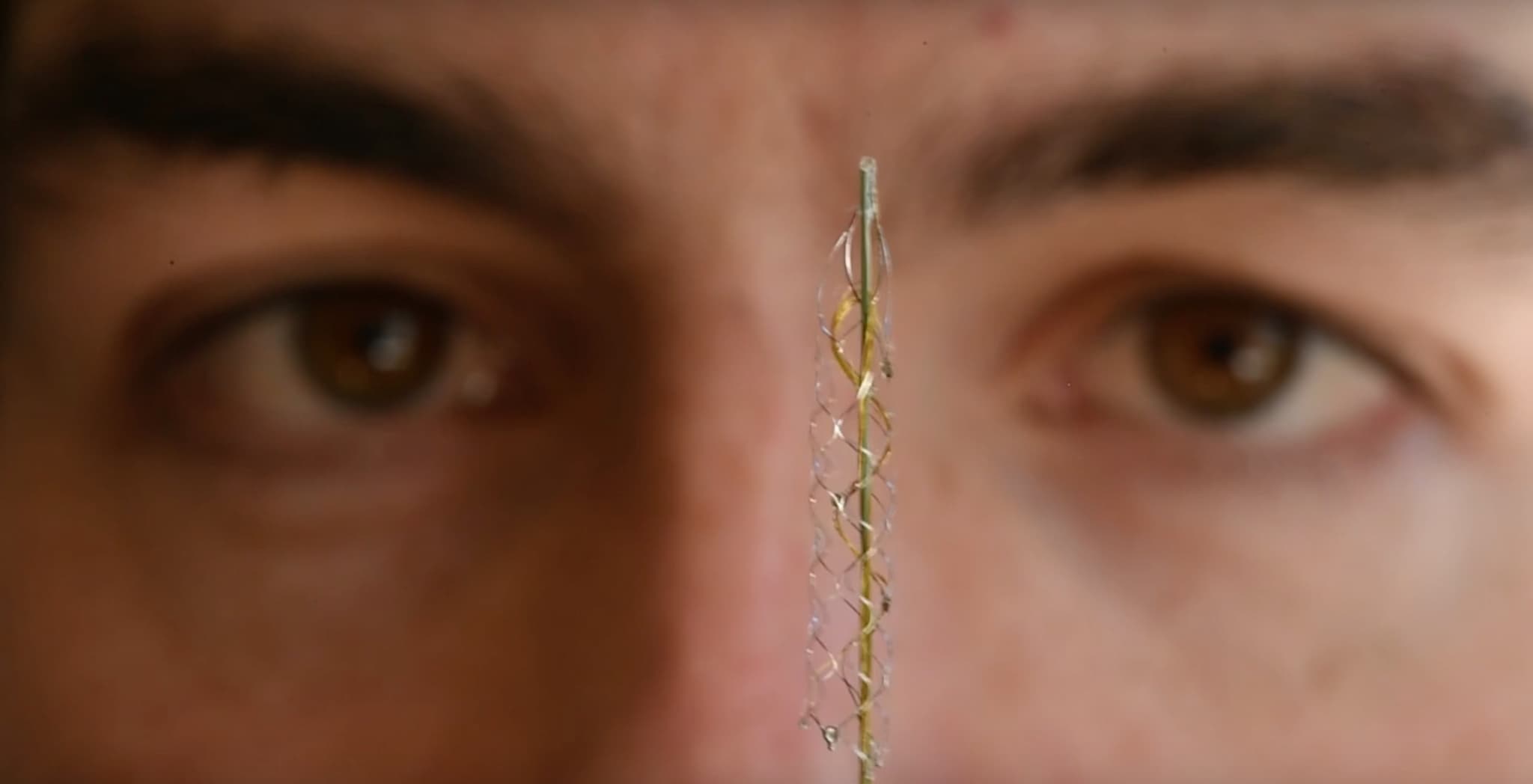 Image by University of Melbourne

Australian researchers have created a "bionic spinal cord." They claim that this device could give paralyzed people significant hope of walking again. And if that's not enough, it could do it utilizing the power of thought and without the necessity of open brain surgery.

A research team from the Vascular Bionics Laboratory at the University of Melbourne developed the novel neural-recording device, which both eschews invasive surgery and decreases the risks of a blood-brain barrier breach by being implanted into the brain’s blood vessels.

Developed under DARPA’s Reliable Neural-Interface Technology (RE-NET) program, the Stentrode can potentially safely expand the use of brain-machine interfaces (BMIs) in the treatment of physical disabilities and neurological disorders.

The researchers describe their "proof-of-concept results" which come from a study conducted on sheep, demonstrating high-fidelity measurements taken from the region of the brain responsible for controlling voluntary movement (called the motor cortex) with the use of the novel device which, as it happens, is just about the size of a paperclip.

Notably, the device records neural activity that has been shown in pre-clinical trials to move limbs through an exoskeleton.

The team, led by neurologist Thomas Oxley, M.D., published their study in an article in the journal Nature Biotechnology.

This new device is based on an existing stent adapted to include an array of electrodes.

In short, stents are off-the-shelf therapeutic tools used to clear and repair blood vessels. The researchers were also able to make the device flexible enough so it can safely pass through curved blood vessels, but rigid enough for the array to emerge from the delivery tube when it reaches its destination.

Typically, implanting an electrode array into the brain requires a surgical procedure through an opening in the skull. On the other hand, the stentrode can be delivered via a much lower-risk procedure called a catheter angiography.

The method involves inserting a catheter into a blood vessel in the neck. Then, with the help of real-time imaging, researchers guide the stentrode to the brain where it expands and attaches to the blood vessel walls. There, the stentrode is able to read nearby neuron activity.

The results from the study demonstrate the quantitative similarity between the measurement of brain signals using the stentrode with those made by commercially available surface electrocorticography arrays that are implanted during open-brain surgery.

Doug Weber, RE-NET program manager, said: “By reducing the need for invasive surgery, the stentrode may pave the way for more practical implementations of those kinds of life-changing applications of brain-machine interfaces.”

Stentrode human trials are slated to begin in 2017 and will be conducted at the Royal Melbourne Hospital in Melbourne, Australia.

Read This Next
Eyes Have It
Doctors Are Preparing to Implant the World's First Human Bionic Eye
Vision Quest
Neural Implant Sends Camera Feed Into Blind People’s Brains
Futurism
Getting Struck By Lightning Can Make Brain Implants Stop Working
Futurism
For the First Time Ever, Scientists Boosted Human Memory With a Brain Implant
Futurism
A New Device Could Make Memory Implants a Reality
More on Enhanced Humans
Butcher Shop
Tuesday on futurism
Neuralink Employees Admit Company Has Killed 1,500 Animals So Far
Skull Candy
Oct 24 on the byte
A Guy Lost His Eye and Put a Bright Light Into the Socket
So Sue Me
Sep 28 on futurism
Battle Erupts Over Alleged Grisly Photos of Brain-Hacked Neuralink Monkeys
READ MORE STORIES ABOUT / Enhanced Humans
Keep up.
Subscribe to our daily newsletter to keep in touch with the subjects shaping our future.
+Social+Newsletter
TopicsAbout UsContact Us
Copyright ©, Camden Media Inc All Rights Reserved. See our User Agreement, Privacy Policy and Data Use Policy. The material on this site may not be reproduced, distributed, transmitted, cached or otherwise used, except with prior written permission of Futurism. Articles may contain affiliate links which enable us to share in the revenue of any purchases made.
Fonts by Typekit and Monotype.