Best Xbox One Controllers of 2023

Slay the noobs, climb the leaderboards. 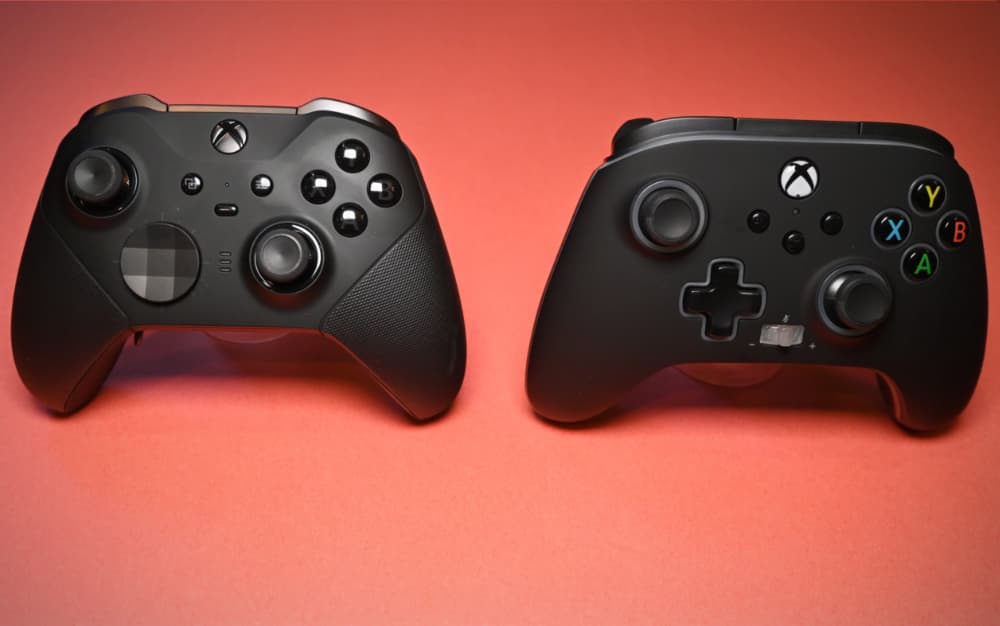 The Xbox One was released in 2013 with the tagline “Jump Ahead” to let the world know exactly what was in store: true, next-gen gaming. After cracking the code on what makes a great controller in the previous Xbox 360 generation, the Xbox One simply refined an already great idea into a near-perfect one. And luckily, you have plenty of choices depending on your gaming proclivities with this compilation of the best Xbox One controllers.

How We Picked The Best Xbox One Controllers

The great thing about Xbox consoles is that you can really never be too late to the party. Even with the Xbox Series X/S flying off store shelves, there are still plenty of reasons to own a new Xbox One console. Being able to access Xbox Game Pass alone may be worth it for many. Here’s the rubric we used when picking out the best Xbox One controllers.

Ergonomics: If the controller doesn’t feel comfortable off the bat, how is it going to hold up after hours of play? In a way, an Xbox One controller being uncomfortable to hold may be an impressive feat, considering that even cheap third parties more or less copy the shell design off the base model. Pair your controller with one of the best gaming headsets.

Build Quality: Sometimes, you don’t even need to pick up a controller to know that it’s poor quality. If a controller looks cheap, it will likely play equally poorly. Buttons should have a satisfying click and shouldn’t feel rubbery or sticky when pressed, even in succession like one does in button-mashing fighting games. If a gamepad is tossed onto a couch or carpet, it shouldn’t crack or shatter. This is competitive gaming, after all. The rage throw is inevitable. Better built controllers should be able to survive a few of these, within reason, of course.

We further explain how we test video game equipment here.

Why It Made The Cut: Xbox’s flagship game controller may just be what it touts itself as: the world’s most advanced controller.

Cons:
— Expect to pay top dollar for one

If you consider yourself a hardcore gamer, there’s a good chance the sleek Xbox Elite Wireless Series 2 is resting in a charging bay next to your gaming rig. More likely, though, it’s lingering on your wish list because of its exorbitant price. You get what you pay for, after all. And this controller comes with every feature you need, along with a few you didn’t know you needed.

Looking for new ways to play? The Xbox Elite offers 30 different custom playstyles that you can change up at will using the Xbox Accessories app. You can save up to three custom and one default profiles on any given controller so you don’t have to fumble around with clunky setups from game to game. Thumbsticks are adjustable to enhance crosshair aiming. Even the D-Pad has an optional upgrade from the classic standard to the new, ergonomic faceless style. Whether you’re gaming on a console or PC, expect up to 40 hours of game time before you have to charge. Or, simply plug in via USB and play wired, to cut out any latency fears. Then check out the best Xbox games.

Why It Made The Cut: The only game in town for real-world racing immersion for Xbox consoles and PC.

Pros:
— Responsive and precise feedback
— 900 full degrees of wheel rotation
— Compatible with a wide array of games, not just racing

Cons:
— Requires room and maybe even a mount to get the full experience
— Some games require configuration to play just right

Along with “Sea of Thieves,” “Halo,” and “Gears of War,” there’s no series quite as synonymous with Xbox as “Forza.” In fact, the Xbox One is a great destination for realistic racing games in general. The “GRID,” “F1,” “Nascar Heat,” “Project Cars,” “The Crew,” and “DiRT” series all sing on the console. And each and every one of them is fully compatible with the Thrustmaster TMX Racing Wheel.

This isn’t some chintzy plastic wheel that forces your imagination to take the lead like the peripheral on the Wii. The Thrustmaster was built from the ground up to simulate the same force and feedback that comes with driving a myriad of racing styles including F1, Rally, GT, and even Nascar. The wheel is built to match these racing styles, with a full 900 degrees of rotation for unprecedented control. At least with some games, anyway. Others require you to adjust the settings to take full advantage of the controller. It even channels motor sounds to provide unmatched racing immersion. Despite its heft, you may want to mount it to your gaming rig to take full advantage of the experience. If you have the space for that sort of thing, that is.

Why It Made The Cut: With eight styles, there’s a version of this simple and sturdy wireless controller for every aesthetic.

Cons:
— Requires batteries to use wirelessly

The Xbox Wireless controller combines the best in ergonomics and design and allows for up to 40 hours of cordless gaming. It’s Xbox Accessory App-compatible so you can map the buttons to your liking across Xbox consoles and PC. It’s even got a dedicated Share button to show off screenshots and recording. These are all facets of an excellent controller.

Aside from that, the Xbox Wireless doesn’t just let you personalize the way you game, but the way your gamepad looks. It’s available in eight colors and styles from Aqua Shift to Daystrike Camo, letting you pick the right design to match your gaming rig. Sadly, to play wireless you have to utilize two AA batteries, which seems like an antiquated idea in 2023. At least it comes with batteries right out of the box, plus, there’s always the option to simply plug in and play wired.

Why It Made The Cut: For an Xbox One controller at this price point, the PowerA Spectra Infinity packs a surprising level of quality.

Even “affordable” wireless controllers will still be at least a modest investment. If you don’t mind going analog, you can nab a wired controller for a fraction of the cost of a wireless one. The wired category of Xbox One controllers is rife with shoddy options, but the PowerA Spectra Infinity is thankfully, an outlier.

Like many pricier models, the Power A Spectra has plenty of customization options, including mappable buttons, with a few extra buttons on the back of the controller. It also comes with dual rumble and sleek, ergonomic grips, putting it on par with fancier models. You can even customize the LED lighting colors, which is an odd, but welcome addition. Some users did report stick drifting, which is wildly inconvenient but may be avoided by simply going easy on those thumbsticks.

Why It Made The Cut: For hardcore gamers who swear by wired controllers, the Razer Wolverine V2 Chroma blends form and function to make a worthy Xbox One controller.

Despite the fact that we’re living in an era of low latency and high refresh rates, gamers who take their hobby very seriously swear by the peace of mind a wire brings to a controller. If you’re looking for a wired controller with all the hardcore gaming trimmings, bet on the Razer Wolverine V2 Chroma.

Like the Xbox Elite Wireless Series 2, this controller comes with a companion app to customize everything. There’s plenty to play with here, including swap-able thumbstick caps, four extra triggers, and two bumpers. Buttons are a bit more tactile than other controllers, and tapping them happens an average 41 percent faster. There’s even a Rapid Fire option for the extra edge in first-person shooters like “Halo Infinite.” Still, there’s something a little strange about spending a fair amount of cash on a wired controller.

Why It Made The Cut: Powerful, customizable, optimal pro-gaming, so long as you’re willing to make the investment

Everything about the SCUF Instinct Pro screams high quality. Right out of the box, it’s the kind of device that makes you ponder, “Should I be wearing gloves to handle this?”

From the beautifully finished faceplate to the non-slip comfort grip, the build quality simply has to be seen–and felt–to be believed. Remappable paddles just under the controller are perfectly in reach anytime you need quick action in a clutch. Considering the wide array of games available on Xbox Series consoles, you can save up to three different profiles for the aforementioned paddles. An LED light on the front of the controller will change depending on the active profile. Thumbsticks and faceplates are totally customizable so you can make your new favorite go-to Xbox controller your own. Unmatched as the build quality may be, expect to shell out a pretty penny for it. Still, its device compatibility is virtually unmatched, especially when you connect it to your favorite gaming device via USB-C, which is included with the device.

Things To Consider When Buying an Xbox One Controller

Not all Xbox One controllers will connect to the PC or Xbox consoles wirelessly. Some connect via wired USB. Some gamers prefer this, as it alleviates any latency fears. Research controllers to see whether you’ll be able to plug in without wires or with.

As addressed above, the best Xbox One controllers should work with both Microsoft’s consoles and the PC. But that’s just the beginning. Some controllers are also compatible with smartphones and tablets on either iOS or Android systems. The Xbox Wireless Controller is one such beast. If you’re especially intrepid, there are even ways to use your certain Xbox One controllers on a Nintendo Switch, which is a near sacrilegious concept.

Q: What is the most reliable Xbox One controller?

The most reliable Xbox One controller is often a function of cost. Reliability is almost assured after a certain price point. For a more affordable reliable controller, the Xbox Wireless is a great option. However, the Xbox Elite Wireless 2 is more than worth the investment.

The Xbox Elite Wireless 2 is an upgrade in every way. It does everything the Xbox Elite 1 does with additional customization features.

Third-party Xbox controllers are absolutely worth buying. A couple of good third-party options include the PowerA Spectra Infinity or the Razer Wolverine V2 Chroma.

Q: Are Xbox controllers hard to find in stores?

Xbox controllers can be hard to find in stores, with some users reporting difficulty finding good quality Xbox One controllers, likely because of continuing supply chain issues.

Q: How much does a Xbox One controller cost?

Wired controllers can be better if you’re the kind of gamer who stresses about latency issues and response rates. You can alleviate these fears by plugging your controller into your console or PC.

Final Thoughts on Xbox One Controllers

No matter what kind of gaming you lean towards on the Xbox One, there’s likely a great option for you. The Thrustmaster TMX Racing Wheel is perfect if you have a need for speed and immersion. If you’re looking to save a few dollars, the PowerA Spectra Infinity doesn’t skimp on quality or customization avenues. The best Xbox One controller by a mile is the Xbox Elite Wireless Series 2, a gamepad that lives up to its name.