Quickly charge your iPhone or AirPods without plugging in a cable. 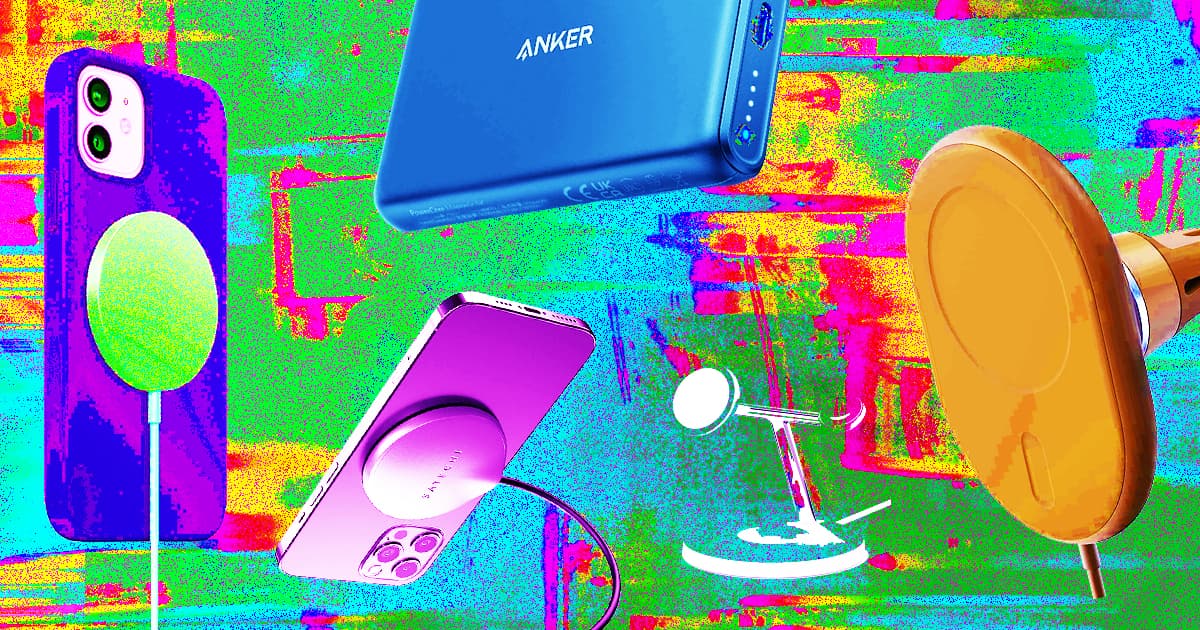 The fastest way to charge your phone is still plugging it into a power adapter with a cable, but the best MagSafe chargers significantly bridge that gap. MagSafe is a charging technology Apple introduced with the iPhone 12, and brought to the third-generation AirPods and AirPods Pro in 2021.

Two features separate MagSafe chargers from the standard Qi-style wireless chargers you may be familiar with. First, they can charge an iPhone at a rate of up to 15W (watts), whereas Qi chargers top out at 7.5 watts. That’s a big enough difference to upgrade from a non-MagSafe charger, or seriously consider cutting the charging cable.

As its name suggests, MagSafe also involves magnets. This style of charger attaches to the back of your iPhone or AirPods’ case magnetically. This means it’ll always stay aligned with the charger for maximum efficiency. If you’re trying to de-clutter your desk or want the best-possible experience wirelessly charging your iPhone or AirPods, these are the best MagSafe chargers you can get.

How We Picked the Best MagSafe Chargers

We’ve put many of these chargers to the test, and our hands-on experience with the ones we’ve tried was positive across the board. The truth is, there’s no *wrong* answer here. MagSafe is still pretty new, and the companies that have started making compatible chargers are targeting iPhone or AirPods owners who want to be on the cutting edge.

Charging Speed: MagSafe has a maximum charging speed of 15 watts, but some chargers top out at 7.5 watts, which is the same level of performance you’d get from a Qi charger. We expect more chargers to take advantage of MagSafe’s true potential.

Portability: The truth is that we all need multiple chargers to make sure our phones are topped up throughout the day. We made sure to select MagSafe chargers that’ll be at home at your desk, on a nightstand, in your car, and everywhere in between.

Multi-Device Charging: If you’ve designated parts of your home as dedicated charging spaces for all your technology, we have you covered. We’ve found the best MagSafe chargers that’ll keep all of your devices topped up and ready to go.

Design: Our primary goal was selecting MagSafe chargers that worked as efficiently as possible, but industrial design does count. Every MagSafe charger in this guide looks as good as it works, with no unnecessary design gimmicks that are more superficial than practical.

Why It Made The Cut: Apple’s first-party MagSafe Charger is fast, easy to take with you, and surprisingly inexpensive (if you already have the right powerful adapter).

It should come as no surprise that Apple itself has made the best MagSafe charger overall, considering it developed the technology. Apple’s MagSafe Charger is one of the few options capable of charging an iPhone at 15 watts. It’s also the only option that’s small enough to reasonably stash in a pocket or backpack pocket.

Our experience with Apple’s MagSafe Charger was universally positive, as it offers fast, consistent charging speed with every device we used it with (an iPhone 12 and iPhone 13 Pro Max). Our only complaint is that you have to purchase a power adapter separately — this is basically a replacement for the Lightning cable that came with your iPhone or AirPods.

What’s more, you’ll need a power adapter that carries at least 20W of power in order to get 15 watts of wireless charging. You can find a compatible adapter for roughly $25, but that nearly doubles the price of Apple’s MagSafe charger. The upside is that you can use a powerful power adapter to charge your other gear, including Apple’s 13-inch MacBook Pro and 13-inch MacBook Air, so you can consider the additional accessory a wise investment.

Despite that setback, Apple’s MagSafe Charger is the best option for most people, especially if you’re just beginning to use this technology.

Why It Made The Cut: Satechi’s MagSafe Charger’s price makes it a great entry point for anyone curious about MagSafe

If you’re a MagSafe skeptic who wants a cheaper way to try this technology out without making a full commitment, Satechi’s USB-C Magnetic Wireless Charger is the way to go. As the best budget MagSafe charger, it’s the least expensive MagSafe charger we can safely recommend based on the reputation of the brand and our personal experience with its MagSafe products.

Satechi’s Magnetic Wireless Charger resembles Apple’s official MagSafe Charger, but we actually prefer the aluminum look of this one. In our tests, a similar MagSafe charger by Satechi has worked very well — the one we’ve tried is basically this exact charger attached to a stand, plus a Qi charger at its base. This MagSafe Charger comes with a couple of caveats, though.

The biggest one is that it only supports charging speeds up to 7.5 watts, which you should expect for a budget-priced MagSafe Charger. The other is that you have to supply your own power adapter, which increases its price. Satechi’s USB-C Magnetic Wireless Charger is a fine choice if you’re game to give MagSafe charging a try, though you may find yourself upgrading to a faster option if you end up liking it a lot.

Why It Made The Cut: The Belkin MagSafe 3-in-1 Wireless Charger is capable of charging several of your Apple devices at their fastest-possible speed.

The most impressive feature of Belkin’s MagSafe charger in our tests is the fact that it can actually charge three devices simultaneously without any compromises. We used all three of the charger’s functions, and didn’t detect any slowdown. The batteries in our iPhone, Apple Watch, and AirPods refilled quickly, and we never noticed Belkin’s charger prioritizing one device over another.

We like that this charger comes with a power adapter, so it’s ready to use right out of the box. Although it’s a premium product, there’s no other MagSafe Charger that can match the raw performance of Belkin’s 3-in-1 Wireless Charger, not even from Apple. If you don’t have an Apple Watch, Belkin also offers a 2-in-1 version of this charger with the same specs.

Why It Made The Cut: This is currently the best MagSafe charger battery pack because of its relatively high battery capacity.

MagSafe-compatible battery packs are hard to come by, which is why we’re so pleased that Anker’s Magnetic 5K Portable Charger works so well. The battery pack has a pretty strong magnetic grip — enough to hold your phone securely in place if it’s in a larger pocket, purse, or the top slot in a backpack in most circumstances. Your experience may vary if you’re on particularly bumpy terrain.

Anker’s 5K Portable Charger has a battery capacity of 5,000mAh (milliamps), which is enough to extend the battery life of your phone by a few hours. The amount it’s extended will vary depending on your screen brightness, the apps you’re using, and whether you have settings like Bluetooth and Wi-Fi enabled. Don’t expect to get a full charge out of this battery pack, though. We got between two to three hours of extra use using this battery pack, which is pretty good. Anker says it can add upwards of 17 hours of extra juice if the only thing you do is watch movies, likely at a lower screen brightness setting.

We hope that Anker’s next MagSafe Portable Charger supports faster charging speeds, but until then, this is the one to get.

Why It Made The Cut: iOttie’s Velox Magnetic Wireless Charging Car Mount can keep your phone secure, charged, and easy to see when using a GPS app making it the best MagSafe charger for the car.

Pros:
– Vent mounts are compatible with all vehicles
– Comes with a power adapter
– iOttie offers a cheaper option if you already have a car charger

If you commute or go on long road trips, it’s hard to overstate the importance of keeping your phone charged, and at eye level. iOttie’s Velox Magnetic Wireless Charging Car Mount checks both of those boxes. The company’s car mount can be attached to any air vent in your car, and comes with a charger that plugs into your vehicle’s cigarette lighter slot.

Many MagSafe car chargers require you to get one separately, so it’s nice that iOttie includes it, even if it bumps up the price a bit. Keep in mind that your placement options when using this MagSafe car charger will be limited to the location of your vehicle’s air vents, so be mindful of where those are.

iOttie’s Velox Magnetic Wireless Charging Car Mount has a maximum charging speed of 7.5 watts, which is standard for this style of charger. This slightly lower speed is less of a problem when driving because your phone will probably stay on the charger longer than it would at home. I’ve generally been impressed with the quality of iOttie’s gear in my test, and have relied on its car mounts for several years. They’ve always held up really well, even during regular use on longer trips.

The Velox Magnetic Wireless Charging Car Mount is currently the best MagSafe-compatible car charger, but iOttie offers a version without the charging cable for half the price. If you already have a charging cable that you like in your car, you should consider that option to save a few bucks.

Things to Consider Before Buying the Best MagSafe Chargers

MagSafe Chargers are designed to be used with newer iPhone and AirPods models, but will charge non-Apple tech, too. You won’t get the benefits of the fastest-possible charging speed or magnetic attachment, but a MagSafe Charger can be used like a Qi charger for those devices.

In many cases, MagSafe chargers are a lot more expensive than a Qi charger. That’s the (literal) cost of adopting a technology early in its development, especially when it’s designed to work best with a limited number of devices. That said, the performance increase you’ll see when using those devices with a MagSafe charger more than justifies the expense.

MagSafe Chargers come in two styles: Pads, which keep your phone’s screen facing upward, and stands, which position your phone’s display toward you. If you tend to leave your phone alone while it charges (especially on a nightstand), a charging pad may be the better choice. If you need a MagSafe Charger on your work desk, where you may want to check notifications coming into your phone without picking it up, we recommend a MagSafe charging stand.

Q: Do MagSafe chargers work if you have a case on your phone?
Yes, you can use a MagSafe charger with most cases, however, only some of them were designed with this type of charger in mind. Compatible cases with magnets will snap onto a MagSafe charger instantly and create a strong connection, non-MagSafe cases may not attach magnetically at all.

I’ve replaced all of the Qi wireless chargers I have with MagSafe chargers, and have never looked back. The difference in charging speed was immediately noticeable, and more than enough to put me over the edge. Start by replacing the wireless charging pad or stand you use most with a MagSafe charger, and you’ll quickly know whether the upgrade makes sense for you.