Get you and your child outdoors more often this year with a top hoverboard. 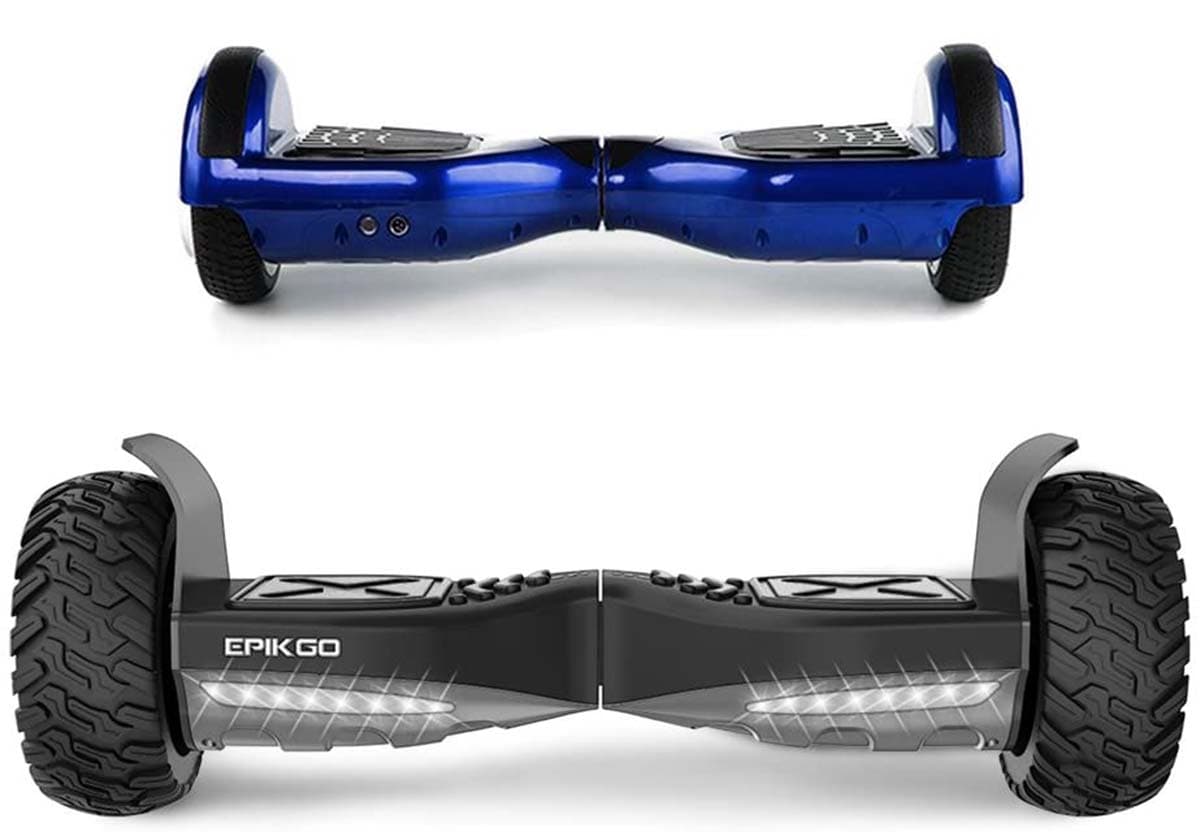 Today’s hoverboards may still be stuck on the ground, but there's still plenty to like about these modern transportation machines. They’re capable of reaching speeds of up to 12 miles per hour and come equipped with wheels up to 10 inches in diameter with beefy pneumatic tires capable of taking them off road. Many come equipped with programmable LED lights and built-in Bluetooth speakers. And, with improvements in battery technology, many of the best hoverboards can last hours and cover nearly 10 miles before needing a recharge.

Whether you're searching for a hoverboard to aid you in your morning commute or to give as a child's birthday present, read on to learn more about what features you need to consider when shopping for the best hoverboard.

How We Picked the Best Hoverboards

We used several criteria to reduce the list of hoverboards we reviewed for this guide down to the top five models. Motor and top speed are key. We selected the hoverboards with motors large enough to allow them to reach speeds in excess of 10 miles per hour. Since safety is key for children's hoverboards, we chose models that did not exceed 7 miles per hour for our best child's hoverboard selection.

The Best Hoverboards: Reviews and Recommendations

Why It Made The Cut: Its durable construction, long battery life, beefy wheels, and a top speed of 12 m.p.h. make the T6 one of the best all-around hoverboards you can buy.

Cons:
— Heavier than other hoverboards

Despite being a bit bulkier than other hoverboards, the Swagtron T6 still tops the list, thanks to its powerful motor and sturdy construction. The Swagtron can reach max speeds of 12 miles per hour, making it one of the fastest hoverboards on the market.

Swagtron adds the stability needed to safely travel at that speed by equipping the T6 with beefy 10-inch pneumatic tires and a sturdy build — it can carry riders weighing up to 250 pounds.

In addition to the T6 being one of the fastest hoverboards you can buy, it's also one of the longest lasting with a battery that gives it a run time of up to two hours, far and away the longest of any hoverboard on the market. However, it's important to note that it does take more than two hours to charge fully.

Other notable features on the Swagtron include a built-in Bluetooth speaker, turn signals, and LED lights.

Why It Made The Cut: Pneumatic tires, a powerful motor that can handle most terrain, and a steering column make the Segway the hoverboard of choice for commuters.

Unlike other hoverboards designed for kids or general recreation, the Segway Ninebot is all business. Keeping in the vein of other Segway products, it focuses on meeting the needs of commuters. So while you won’t find add-ons like Bluetooth speakers and colorful LED lights on the Ninebot, you will find a well-constructed machine with ample power for getting you from point A to point B.

The Ninebot boasts an 800-watt motor, which is powerful enough to not only reach speeds of more than 10 miles per hour, but can also scale climbs with gradients of up to 15 degrees. Its 10.5-inch pneumatic tires can handle rougher pavement, and it has a range of more than 13 miles on a single charge.

Despite its sturdy build and large motor, it still weighs a manageable 28 pounds. The Ninebot also looks different from other hoverboards, thanks to a steering column that rises between your ankles, allowing you to steer more easily as you lean against the column to turn left or right.

The Segway also has features commuters will appreciate, including an app that allows one to lock the vehicle remotely to discourage theft and LED lighting that makes you more visible to motorists and pedestrians.

Why It Made The Cut: With its knobby tires and powerful dual motors, the EpikGo is one of the best-equipped hoverboards for off-road terrain.

Cons:
— Expensive
— Not as nimble as other hoverboards

If you're looking for a hoverboard, and you want to take off the beaten path onto unpaved roadways, then look no further than the EpikGo Classic. This rugged hoverboard is built for rough terrain with its 8.5-inch knobby tires, which are suitable for everything from rough pavement to packed sand. It also boasts a long battery life of up to two hours, putting it among the most long-lasting hoverboards you can buy.

There are some trade-offs for EpikGo's off-road capability. While its wider-set wheels and knobby tires make it suitable for uneven terrain, it does make the Epikgo less nimble than other hoverboards. It doesn't corner as well as some hoverboards designed exclusively for paved roads.

With its dual 400-watt motors, the EpikGo is capable of motoring through grass or powering upgrades of up to 18 percent and rolling over uneven ground. However, it tops out under 10 miles per hour, making it slower than other hoverboards that cost less. The EpikGo is also notably on the heavier side at a weight of 31 pounds, which can make it difficult to carry up a flight of steps. Its off-road ability also doesn't come cheap, as the EpikGo happens to be one of the most expensive hoverboards on the market.

Why It Made The Cut: A safe top speed, long battery life, and features kids will appreciate, such as Bluetooth speakers and colorful LED lights, make this the ideal hoverboard for kids.

Cons:
— Not as durably constructed as other hoverboards

The Tomoloo checks all the right boxes when it comes to a hoverboard designed to suit kids. It tops out at a safe speed of 7.5 miles per hour, enough for kids to have fun without inducing anxiety in parents. The hoverboard also lasts a long time with a 4-hour battery life, ensuring it won't run out of juice before your child does. And, once it does need a charge, it only takes an hour to get it back online.

At just 18 pounds, the Tomoloo is easier to maneuver for smaller bodies than the larger and heavier hoverboards designed for adults. It also comes loaded with features that kids will appreciate, including colorful LED lights and built-in Bluetooth speakers, both of which can be controlled via the Tomoloo app. The LED lights even synchronize to the beat of the music. The app also includes useful settings for parents, such as a setting that regulates its top speed.

Other notable features include 6.5-inch tires that make the hoverboard easier to maneuver for smaller bodies than hoverboards with 8- to 10-inch wheel sizes.

Why It Made The Cut: The T580 Warrior XL provides good performance at a very affordable price, making it one of the best budget hoverboards you can buy.

The Swagtron T580 Warrior XL is a great choice for teens who are looking for a fun ride, with safety features parents will appreciate. The T580's two 300-watt motors provide a max speed of about 9 miles per hour. The Warrior is designed with a lithium-phosphate battery that's non-flammable for safety. After a charging time of four hours, the Warrior can travel for up to nine miles.

What's more, the Warrior comes equipped with five-watt Bluetooth speakers and LED lights to maximize the fun. The Warrior's 8-inch rubber tires also allow for plenty of off roading. With all these features, the Warrior is also more affordable than comparable models.

Things to Consider Before Buying a Hoverboard

The size of the wheels determines the quality of the ride along with where you'll be able to take it. Hoverboards with larger wheels offer more stability and are capable of handling uneven paved surfaces or even unpaved roads more easily than those with smaller wheels. Hoverboards with smaller wheels are easier to turn and maneuver than those with larger wheels. If you're looking to stay on paved roads exclusively, then a ride with smaller 6- to 8-inch wheels should suffice. If you want to go off-road, you'll need a hoverboard with large wheels and knobby tires.

The hoverboard’s battery size determines how long and how far you can ride before the hoverboard needs a recharge. Depending on the battery, hoverboards will give the rider between 40 minutes and four hours of run time before running out of juice.

In terms of how far a hoverboard can travel, most have a range of between 9 and 12 miles on a single charge. Hoverboard batteries take between 1 and 2 hours to recharge fully.

Many hoverboards can connect to your smartphone via Bluetooth, allowing you to control certain aspects of the board via a smartphone. Hoverboard smartphone apps allow you to customize LED lights, play music through its speakers, check diagnostics and set up anti-theft protections. These apps are also useful for parents who can use them to limit the hoverboard’s top speed.

Q: What is the longest-lasting hoverboard?

Though it may not be the fastest hoverboard with a top speed of 8 miles per hour, the Tomoloo Music-Rhythmed Hoverboard is the longest-lasting, with a battery life that spans four hours. The Tomoloo also recharges to full power in just one hour.

Q: What is the best and safest hoverboard to buy?

The safest hoverboard and the best one aren’t necessarily the same thing. One of the safest hoverboards you can buy is the Tomoloo Music-Rhythmed Hoverboard, which has a top speed of just 7.5 miles per hour. It's also compatible with an app that allows parents to further limit its top speed if they so desire. The best all-around hoverboard is the Swagtron T6, which has large 10-inch wheels, can reach speeds of 12 miles per hour,  and has a long battery life of two hours.

Q: Are hoverboards worth the money?

While hoverboards can be pricey, they’re worth the money for someone who's looking for a way to enhance their outdoor recreation. They’re easy to learn to ride, making them ideal for kids. They can also function as capable commuter vehicles for adults.

Q: What hoverboard brand is the best?

Q: Which hoverboard is the fastest?

The Swagtron T6, with its ability to reach speeds of 12 miles per hour, is the fastest hoverboard you can buy. In addition to being quick, it also has a long range of up to 12 miles with a battery life of up to 2 hours.

Q: What is the strongest hoverboard?

Though it may not be able to reach speeds as high as other hoverboards, the EpikGo is one of the strongest. It can support a max weight of 240 pounds and is capable of scaling hills with gradients as steep as 18 degrees.

Q: Do hoverboards work on grass?

Q: Are 7-year-olds allowed on hoverboards?

Many manufacturers do not recommend hoverboards for use by kids under the age of 13. That said, manufacturers such as Tomoloo do make hoverboards that are lighter weight and have lower max speeds that are safe for kids as young as 8 years old. Here are more suggestions for the best science gifts.

For its ability to reach top speeds of 12 miles per hour,  its two-hour battery life, and quality construction that includes 10-inch pneumatic tires, the Swagtron T6 is the best all-around hoverboard. Those looking for a more affordable model should consider the Swagtron T580 Warrior XL, which can still reach speeds of 9 miles per hour, but costs significantly less than other hoverboards.