The Best Apple Watch Chargers in 2023

Keep your timepiece topped up. 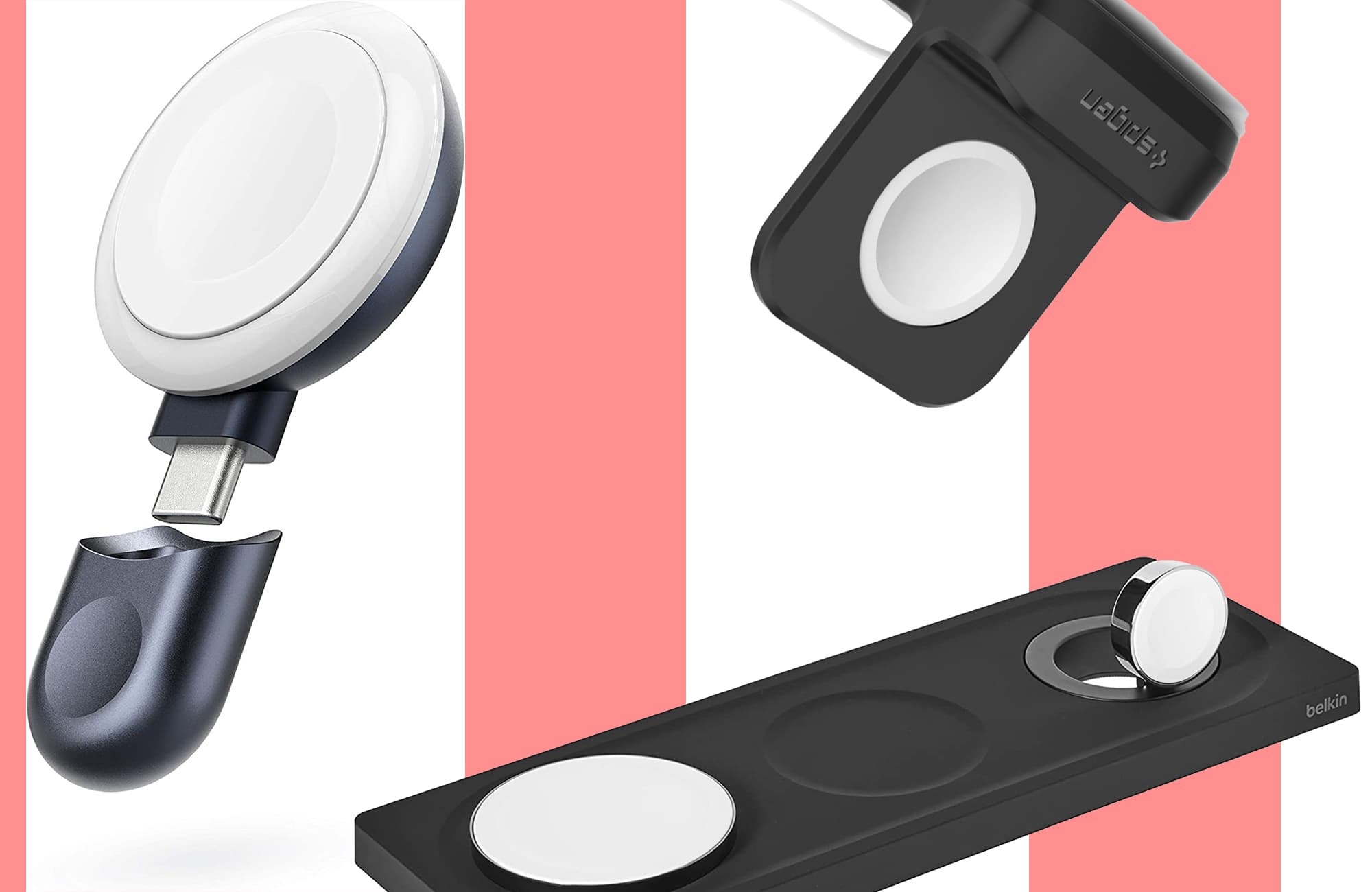 The Apple Watch is a powerful, multi-purpose smartwatch, but you won't be able to take advantage of any of its features if its battery dies, which is why the best Apple Watch chargers come in handy.

Apple has maintained that the Apple Watch has "all-day" battery life, which it quantifies as 18 hours. In our experience, the Apple Watch does last far longer than a smartphone, tablet, or laptop, but you can drain its battery more quickly if you use its fitness tracking features, crank up its screen brightness, and use Siri often.

If you often find yourself with an Apple Watch with a battery that's running low, these are the best Apple Watch chargers you should keep in your home and take with you on the go.

How We Picked the Best Apple Watch Chargers

Our Apple Watch charger recommendations are all based on a mix of hands-on testing and research. Because this accessory only needs to accomplish one task, we made sure our picks didn't have any unnecessary frills, or designs that made it more difficult to charge your Apple Watch.

Multi Device Charging: If you're short on space, you may want to consider getting an Apple Watch charger that can also top up the battery in your other devices. Using a multi-device charger allows you to keep all of your gadgets alive without having several power adapters and cables hanging around.

Why It Made The Cut: Belkin's MagSafe 3-in-1 Fast Wireless Charger offers all the features one could want from an Apple Watch charger.

Belkin has been working closely with Apple to release first-class accessories for the iPhone, AirPods, and Apple Watch, and this MagSafe 3-in-1 Fast Wireless Charger is one of its best offerings yet.

In our tests, this charger was able to charge an Apple Watch at its fastest possible speed, while simultaneously charging an iPhone and a pair of true wireless earbuds. This is a MagSafe charger, which means it can wirelessly charge an iPhone at a rate of up to 15 watts. That's twice the charging speed of a Qi wireless charger. We're happy to report that Belkin's MagSafe 3-in-1 Fast Wireless Charger continued to show these results after weeks of regular testing, so we're very confident in its ability to charge devices over the long term.

A lot of Apple Watch chargers require you to supply your own power adapter, which adds to their expense. Belkin supplies one with this charger, so you can use it right out of the box. While we appreciate the convenience, we're less impressed at the fact that this charger uses a proprietary power plug rather than a USB-C port. This means you'll have to contact Belkin's customer support if the — admittedly very thin — cable frays or wears out, and wait for them to replace it. We hope future Belkin chargers are equipped with a USB-C port and standard power adapter.

If you can deal with that potential inconvenience, and the fact that all multi-device chargers take up more space than a single charger, we highly recommend Belkin's MagSafe 3-in-1 Fast Wireless Charger. For more options, here are the

Why It Made The Cut: Anker's Apple Watch charger is both pocket- and wallet-friendly without losing any features.

Cons:
— Only charges an Apple Watch

Anker's Portable Magnetic Charger truly lives up to its name. The charger has a USB-C or USB-A port built right into the magnetic connector, which lets you plug your Apple Watch directly into a port on your computer. This flash drive-like design means you can carry the charger with you anywhere, and easily plug it into whichever device, power adapter, or battery pack is around. Anker even includes a sheath for this charger's USB jack, so you don't run the risk of damaging it in your bag or pocket.

Despite its small size, Anker's Apple Watch charger allows you to top up an Apple Watch Series 7 at its highest possible speed.  While we're calling out Anker's Portable Magnetic Charger for its relatively low price — we wanted a budget pick that still supported fast charging — its portability was another big consideration. If you want a relatively inexpensive Apple Watch charger you can take with you anywhere, this is the one you should get.

Why It Made The Cut: Spigen's Apple Watch Charging Stand turns your smartwatch into the bedside clock you didn't know you needed.

Apple recently introduced an Apple Watch feature called "Nightstand Mode," which effectively turns your smartwatch into a bedside clock. In Nightstand Mode, your Apple Watch will constantly display the time when it's turned on its side and connected to a charger. If you charge your Apple Watch while you sleep, and would like to use the device as an alarm clock, it's a really helpful feature.

Spigen's Apple Watch Charging Stand can help you take advantage of Nightstand Mode by propping up your smartwatch while it charges. The stand itself is pretty small, but its lower lip is wide enough to hold your Apple Watch in place. You can wrap your watchband around the back of the stand, or leave it open if you prefer. This accessory is simple, but it can help make the Apple Watch an indispensable part of your nighttime and morning routine.

Our only quibble is that Spigen doesn't include a power adapter with this stand. We'd typically ding this charger for its lack of fast-charging support, but that's less important if you use it to charge your Apple Watch overnight. If you have a spare power adapter around, and want to give the Apple Watch's Nightstand Mode a try, this is the Apple Watch charger to get.

Why It Made The Cut: Satechi's Quatro is a battery pack that can keep all of your devices charged when you're out of the house.

Cons:
— Bigger and heavier than many other battery packs

Satechi's Quatro is not only the best power bank for the Apple Watch, it's one of the best battery packs for anyone who uses Apple hardware.

The Satechi Quatro has a capacity of 10,000 MilliAmps, which is enough to fully recharge most smartphones once or twice. It has one USB-C and one USB-A port, so you can plug in two devices at the same time, plus a Qi charger and Apple Watch charger on top of the battery, for dual wireless charging. In total, you can charge four devices at the same time.

This Swiss-Army-Knife approach to design means the Satechi Quatro is ready to charge all of your devices all the time. And while all battery packs can charge your Apple Watch if you plug them in, the Quattro's dedicated Apple Watch charger is way more convenient to use. This power bank's only significant weakness is its lack of fast charging support, which matters a lot when you're looking for a quick charge to get you through a few hours away from an outlet. The wireless charging pad on top of the Quatro has a maximum power output of 5 watts, which is also kind of slow.

While some of the Quatro's tech specs are a little lacking, it's still the best power bank for Apple Watch owners who want to charge their smartwatch from planes, trains, or automobiles.

Why It Made The Cut: If you want to start upgrading your Apple Watch cables with ones that support fast charging, seriously consider Apple's option.

It's not a charger per se, but Apple's official Apple Watch to USB-C charging cable is an essential charging accessory for all Apple Watch owners. This cable terminates in a USB-C jack, which enables fast charging on Apple Watch models that support that feature. As time goes on, you should slowly replace all of your cables with these newer ones to have the best possible experience when charging your Apple Watch. Fast charging may not seem that important, but you'll appreciate it when you only have a half hour before you need to leave your place and realize your Apple Watch battery is at 10 percent.

Our qualm with Apple's official charging cable is that it doesn't have a braided outer casing. This means it's more susceptible to nicks, scratches, and other damage. If this has been a problem for you in the past, we recommend getting Satechi's Apple Watch cable, which supports fast charging without sacrificing durability. That cable's downfall is its short size (seven inches), which limits its applications.

If your current Apple Watch charging cable is on its last legs, and you plan on upgrading your smartwatch in the near future, Apple's Magnetic Fast Charger is a no-brainer upgrade.

Things To Consider When Buying an Apple Watch Charger

Where You Charge Your Apple Watch

Future Apple Watches will almost certainly continue to support the fast-charging feature Apple introduced with the Apple Watch Series 7. If you plan on upgrading your Apple Watch anytime soon, you should strongly consider getting an Apple Watch charger that supports fast charging. Safeguard your devices with the best screen protectors.

Q: Does Apple include an Apple Watch charger with its smartwatch?

No. Apple provides an Apple Watch charging cable, which can be plugged into a power adapter or computer, but does not include a charger with the Apple Watch.

Q: How long will my Apple Watch Charger be compatible with future Apple Watches?

You may consider Apple Watch chargers to be a boring tech accessory, especially when you compare it to a tool like the Wristcam, which allows you to take pictures and record video from an Apple Watch band. Still, it's important to have at least two chargers available to you at all times (one for inside and outside your home) to ensure it doesn't run out of battery. It's frustrating to look down at your wrist for the time, or to check the weather, and be met with a blank screen.