Belkin 3-in-1 MagSafe Charger Review: A High-Tech Treehouse For Your MagSafe Apple Gear 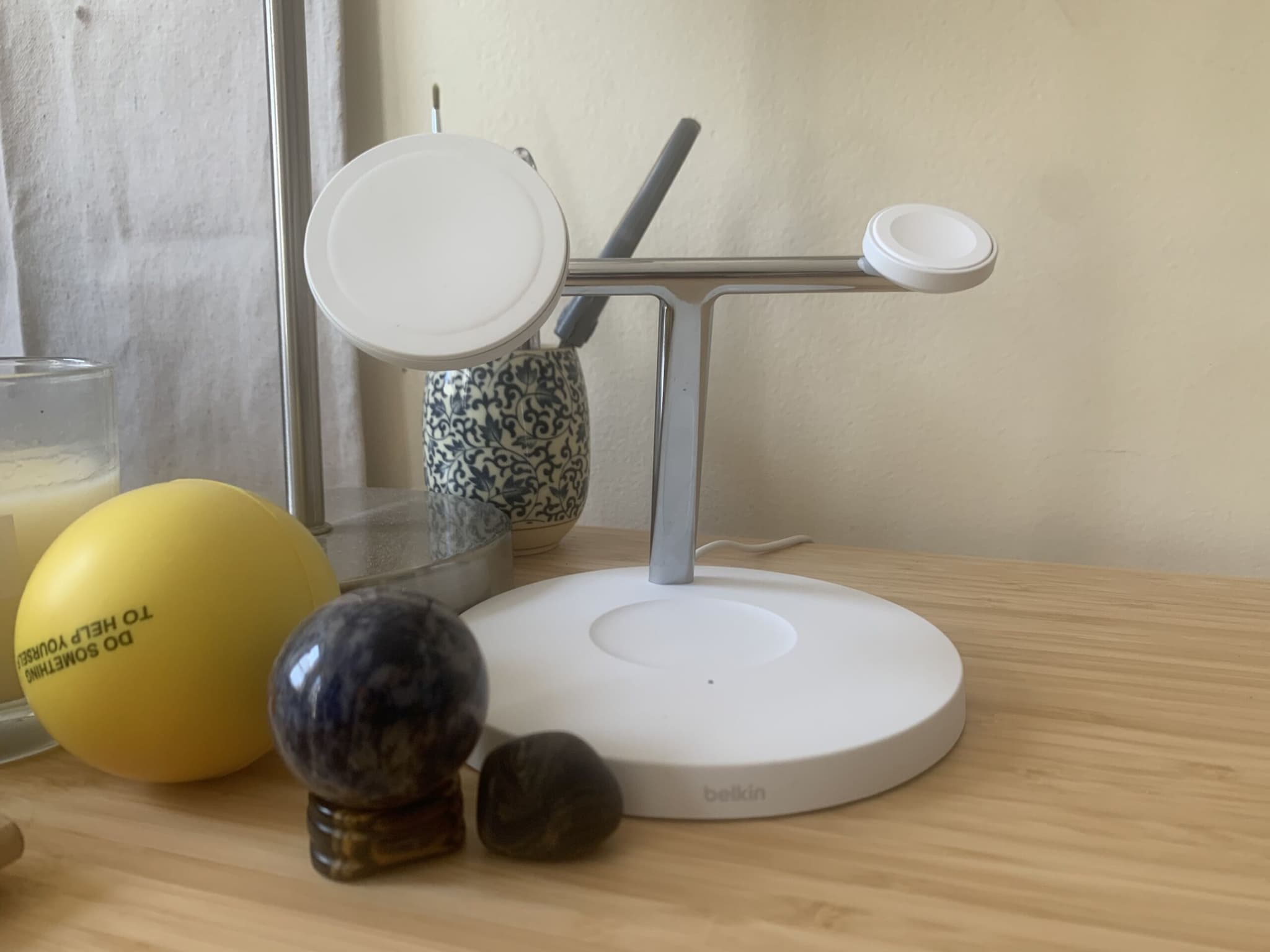 With branching charging pads that evoke the bonsai tree, the Belkin 3-in-1 is an elegant MagSafe charger that’s ready to play host to all your Apple devices. As powerful as an Apple original, the 3-in-1 delivers true MagSafe 15-watt charges wirelessly, for up to three devices. Backward compatible, it’s also capable of charging older Apple products that still use Qi-standard wattage of 7.5 watts. With so much charging potential, this charger is a great pick for someone who uses their iPhone, AirPods, and Apple Watch daily, or for a couple who want to share a wireless charging on the bedside table. Here is our Belkin 3-in-1 MagSafe charger review.

Cons:
— Non-MagSafe Qi phones will not stick to the raised charging ports
— Somewhat pricey
— Adapter is large and takes up too much space for busy power strips

What Is the Belkin 3-in-1 MagSafe Charger?

Wireless charging has been around for a while now. In 2017, Apple released its first wireless-charging-compatible iPhones, the iPhone 8 and iPhone X. These two phones used the Qi standard, which charged at 7.5 watts. With the update to MagSafe with the iPhone 12 series, Apple doubled this wattage to 15 watts and introduced increased magnetization, which facilitates better wireless circuits, and magnetic connections between your phone and accessories.

Wireless charging uses inductive charging to power up your device. MagSafe makes use of a coil of wire in your phone’s charger which creates a magnetic field, this field then generates current in another coil of wire in your phone. This process is called inductive coupling. This method does result in a power loss. This is why 15-watt chargers require 20-watt adapters.

Belkin is one of the few third-party sellers to provide full 15-watt MagSafe charging for Apple devices.The 3-in-1 is an innovative charger that makes a great addition to a desk or a nightstand.

With a white or black base that’s 5.25 inches around, the Belkin 3-in-1 MagSafe Charger features a T-shaped chrome-metal stand that angles out of the base and splits, with two charging pads connected to the ends of its two branches. On the left, a 2.4-inch round pad offers the primary phone connection, angling at a slope that’s useful for Facetime or movies, and can support your MagSafe iPhone in landscape or portrait orientation. On the right, a 1.25-inch round pad is cocked at a slightly different angle, and is designed for charging your Apple Watch. On the flat lower pad, an unobtrusive white light turns on when the device is actively charging.

MagSafe devices securely lock to the charging pads and initiate charging immediately. It’s worth noting that older iPhones will not magnetically lock to the pads, though they will be able to charge at Qi speeds from the lower, flat pad. Potential users should also note that MagSafe phones will require a MagSafe case with a ring in it that facilitates connections, as many non-MagSafe-compatible cases will block the magnetic connection and reduce charging capabilities.

The device features a 58-inch cord (4.8 feet). This feels long enough for most people’s uses. Sadly the cord’s adapter is rather bulky, requiring about 4.25 inches of your power strip, with a design that will block cords plugged into a power strip on both sides of it. Because of this I had to rearrange my power setup at my desk and plug it into the wall, as this adapter took up as much room as three other plugs on my strip.

If you haven’t charged with MagSafe you might wonder if it’ll slow down your charging times. Well that depends… The Belkin 3-in-1 isn’t as fast as a 20-watt USB-C — at least at first — but it will outperform older chargers without a problem. Expect a full MagSafe charge to take somewhere around 25 minutes longer than a full 20-watt USB-C charge. However, MagSafe is still significantly faster than the old 5-watt USB-A chargers, which can take a full hour longer than MagSafe to deliver a full charge. If you want the fastest charge for your iPhone out there, then go with USB-C. However MagSafe isn’t far behind, and with the added convenience of easy set-it-down connections, it will be worth it to many.

Final Thoughts: Who Should Buy the Belkin 3-in-1 MagSafe Charger?

The Belkin 3-in-1 MagSafe charger is a great charging accessory for those who are deeply invested in Apple products and who use their iPhone, AirPods, and Watch every day. It’s also a great choice for couples who might want a simple multi-device charger for their nightstand.

The device suffers from only one real design flaw, namely the clunky adapter-plug that demands an unreasonable slice of power-strip real estate. However, the adapter certainly isn’t a deal-breaker. The device is also expensive, but not far more expensive than many Apple chargers with separate purchases of adapters and cords.

I can see myself getting into the habit of docking my iPhone on the Belkin 3-in-1, and using it while I thumb through Instagram or watch a short video. Its elegant aesthetic makes it an attractive desk piece for an executive suite. Whether it's for a nightstand or desk, if you’re deep in the ecosystem and you're tempted by this MagSafe treehouse, the takeaway should be that it is a good buy — MagSafe is fast, convenient, and reduces heat during charging. This Belkin delivers all of that in a sleek package. Sound good? It is.