Atlantic Circulation Weakening: No, We’re Not All Gonna Die (I Mean, Not Because Of This)

There are many more climate-based doomsday scenarios with real data that you can worry about. 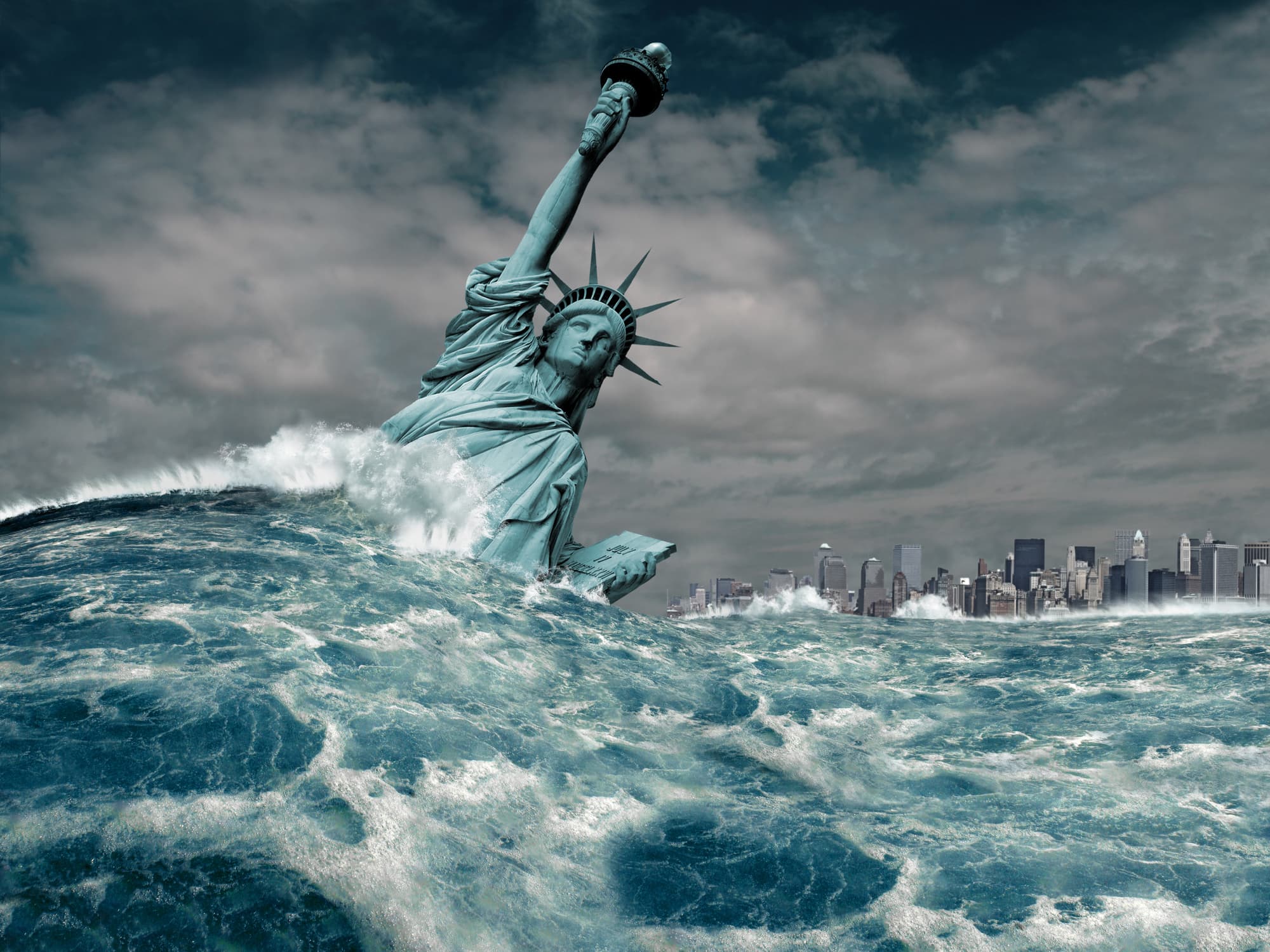 Well, if recent headlines are to believed, two new studies published in Nature predict that some version of this movie disaster might actually happen — and sooner than you might think.

But scientists told Futurism that interpreting these results as a sign of a coming catastrophe, as some media reports have, is a pretty big leap. (We'll say straight off that there's zero risk that the Statue of Liberty is going to be frozen up to her nostrils in ice any time soon.)

The two Nature papers highlight that the Atlantic meridional overturning circulation (AMOC), a cycle that moves heat throughout the world's oceans and has a major impact on climate, slowed down abruptly 150 years ago, moving much more slowly than the 1,500 years prior. They also suggest that it's continued slowing down since then, potentially due to climate change.

Climate models have suggested that human-caused climate change could cause this cycle to slow, as warmer ocean temperatures and fresh water from melting ice stop water from sinking as it normally would, which would drive the cycle. If that slowdown really does happen, the climates of North America and Western Europe could be radically different, and as would hurricane and monsoon cycles around the world.

However, research has suggested that the likelihood of Atlantic circulation stopping altogether — a situation that would, indeed, have "Day After Tomorrow" effects on the planet — is very low, and that any of those drastic effects would take centuries to manifest.

"In regard to the AMOC, don't believe the hype," Richard Seager, research professor at Columbia University's Lamont Doherty Earth Observatory who focuses on climate change and climate variability, told Futurism. "While state-of-the-art climate models have many problems simulating the AMOC they do not project a collapse of the AMOC for the future, but do project a weakening."

So far, models have not definitively linked alleged changes in the AMOC to human-caused climate change. Indeed, the two recent Nature papers take different stances on this as an explanation for the cycle's change over the past 150 years; one spells out associations between the slowdown and human-cased climate change, while the other suggests natural processes slowed the Atlantic's roll.

Another important thing to remember: the idea that the AMOC is slowing down is not based on direct observation. Scientists have made some direct measurements over the past ten years or so that show a slowdown, but given how variable the current is decade to decade, we can't say for sure that they establish a long-term trend.

"Both Nature papers come to the conclusion that we have been able to measure [a significant change in the AMOC]," said Martha Buckley, assistant research professor in atmospheric, oceanic and earth sciences at George Mason University. "However, I believe that the majority of scientists in the field would suggest that we have not. Furthermore, I believe that the public has been mislead to believe that the papers are based on observations, whereas the results are highly dependent on climate models."

Annalisa Bracco, a professor in oceanography and climate dynamics at Georgia Tech, also pointed out in an email to Futurism that other researchers' reconstructions disagree with the conclusions of these papers, and don't show any significant decline over the last 150 years at all.

Does the research supported the idea that a collapse of the Gulf Stream could happen faster than previously expected? we asked Bracco. She simply responded: "No."

In other words, there are plenty of other climate-related existential threats to keep you up at night that have, you know, actual data supporting them. Sudden disaster scenarios might make for a good headline, but we'd be better off leaving the climate drama to Hollywood.

Read This Next
Sun Shield
Scientists Increasingly Calling to Dim the Sun
Coastal Chaos
The Doomsday Glacier Is Hanging on "By Its Fingernails," Scientists Say
Dry Dock
The Top 13 Wildest Objects That Terrible Droughts Have Revealed
Harambe 2.0
Freya the Boat-Climbing Walrus Euthanized Because of Stupid Humans
Disease Dilemma
Study: Climate Change Making More Than Half of Infectious Diseases Far Worse
More on Earth & Energy
Oversharing 101
Monday on the byte
Bill Gates Reflects on Drinking Product of Fecal Sludge
Battery Powered
Nov 17 on the byte
Startup Says It's Building a Giant CO2 Battery in the United States
Monkey Business
Nov 15 on the byte
Meal Kit Giant Accused of Using Monkey Labor to Source Coconut Milk
READ MORE STORIES ABOUT / Earth & Energy
Keep up.
Subscribe to our daily newsletter to keep in touch with the subjects shaping our future.
+Social+Newsletter
TopicsAbout UsContact Us
Copyright ©, Camden Media Inc All Rights Reserved. See our User Agreement, Privacy Policy and Data Use Policy. The material on this site may not be reproduced, distributed, transmitted, cached or otherwise used, except with prior written permission of Futurism. Articles may contain affiliate links which enable us to share in the revenue of any purchases made.
Fonts by Typekit and Monotype.