Ubisoft painstakingly reconstructs ancient worlds for its games. Why not bring it to the classroom? 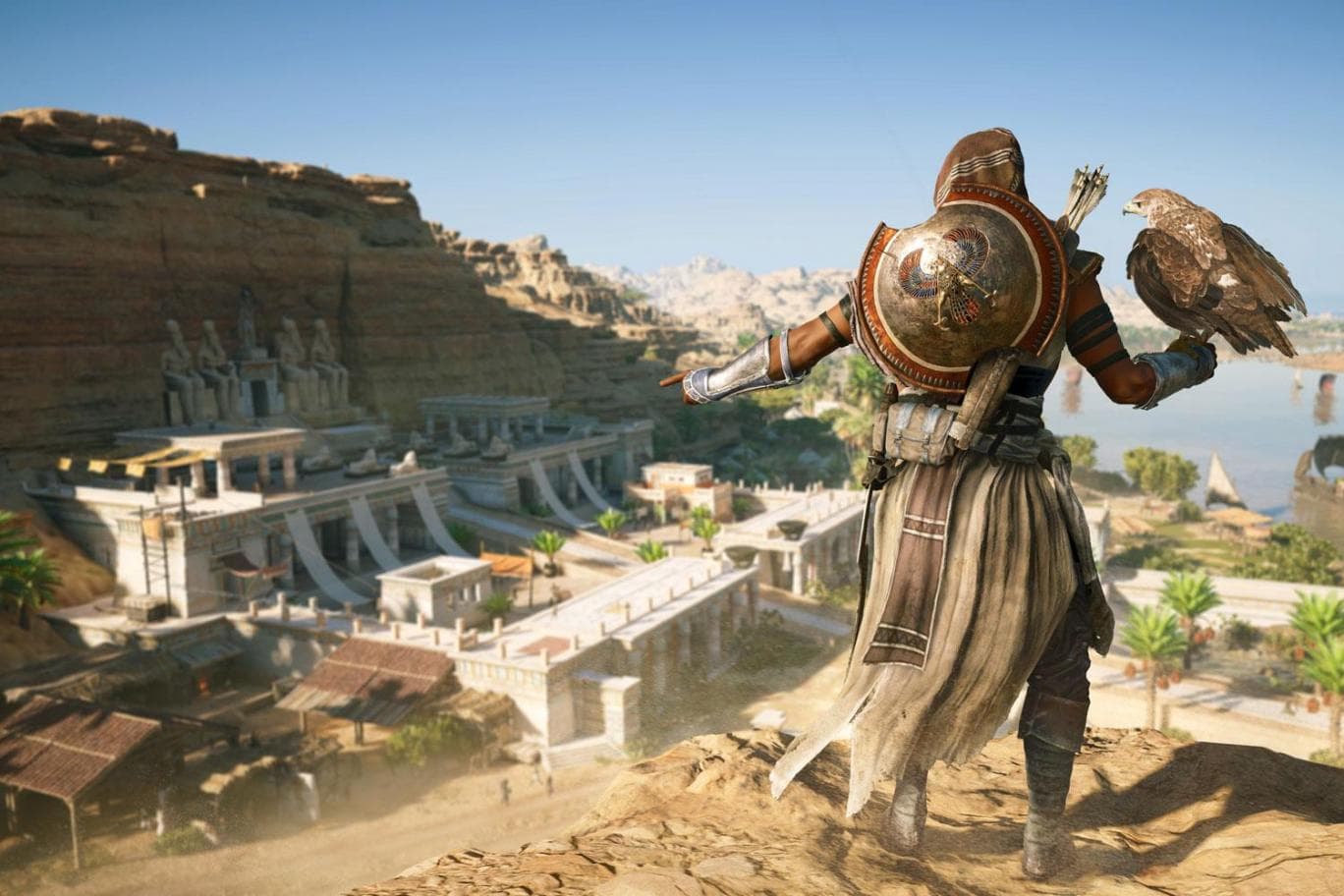 A crimson red sun peeks out behind the pyramids of Giza. You're standing in the middle of an ancient bazaar, that is suddenly shrouded in the glowing particles of a fierce sandstorm. A young girl grabs your hand, pulling you towards a tall overhang made of giant slabs of limestone.

This is what it's like to play one of Ubisoft's blockbuster Assassin's Creed games. There's staggering attention to detail, loyalty to historical accuracy, plus a dash of creative freedom. Ubisoft's development team has been reconstructing ancient worlds — from Italy's 15th century Renaissance to the Ptolemaic period of ancient Egypt — since 2007.

Now, the developer is trying to break the boundaries of how video games fit into our lives, bringing its newest offering (Assassin's Creed Origins) into the classroom. Ubisoft released Assassin's Creed Origins: The Discovery Tour, a stripped-down version of its blockbuster title that includes 75 interactive tours of ancient Egypt, sans fighting or other distractions.

Each tour ranges from five to 25 minutes, and users can chose their own avatars, including historical figures such as Cleopatra and Caesar. The team first stripped conflict and narrative from Assassin's Creed Origins, and then made the full map of Egypt accessible, creating narratives around different interactive tours.

The idea makes a lot of sense. They've already done the hard work of painstakingly reconstructing ancient worlds, and there's so much information packed into a gaming experience that most players take for granted anyway. By adapting the game into an education-appropriate format, Ubisoft has created a virtual museum — an interactive, and immersive experience meant to make students experience ancient history as they learn.

A virtual museum certainly seems much more appealing to a generation of gamers, especially compared to its dusty, real-world counterpart. Visitors are given agency, choosing their own paths as they explore the digital world.

Ubisoft's own testing shows it's promising. The company invited 300 10-year-old students to explore the Discovery Tour, and found it helped them retain more information.

And the folks at Ubisoft aren't the only ones who think it's a good idea. "Ever since the first game, we had a lot of testimonies from teachers, from professors, asking, 'Would you consider making a version of AC without conflict, without narrative?' They'd been using Assassin's Creed, recording sessions with their own consoles, trying to bring it into classrooms – but the age rating, for instance, was an issue," Maxime Durand, Ubisoft's in-house historian (yeah, they have one of those) in a Q&A published on the company's web site.

It's an exciting glimpse into what a video game can offer (beyond the sandbox capabilities of Minecraft). As games that incorporate augmented and virtual reality become more mainstream and diverse, the museum of the future may be even more immersive than we can imagine.

Read This Next
From Our Partners
Pick Up These Award-Winning Game Titles for Less This Black Friday
From Our Partners
Get A Year Of Gaming With This Black Friday Deal On PlayStation Plus
From Our Partners
Pre-Black Friday Doorbusters: Save on This Gaming Controller
FROM THE DEPT. OF THINGS TO BUY
Best Black Friday Deals of 2021
From Our Partners
Play Hundreds Of Retro Video Games With 59% Off This Mini Gaming Console
More on Sci-Fi Visions
Getting Worse
Yesterday on the byte
Bitcoin Just Had Its Worst Month in Crypto's Entire History
FROM THE DEPT. OF...
Yesterday on futurism
Good Buys: Outer Brown Wicker Outdoor Armchair Conversation Set
FROM THE DEPT. OF...
Yesterday on futurism
Oh, Say Can You See These Amazing 4th of July Sales
READ MORE STORIES ABOUT / Sci-Fi Visions
Keep up.
Subscribe to our daily newsletter to keep in touch with the subjects shaping our future.
+Social+Newsletter
TopicsAbout UsContact Us
Copyright ©, Camden Media Inc All Rights Reserved. See our User Agreement, Privacy Policy and Data Use Policy. The material on this site may not be reproduced, distributed, transmitted, cached or otherwise used, except with prior written permission of Futurism. Fonts by Typekit and Monotype.