Who's winning the space race — SpaceX or Blue Origin? 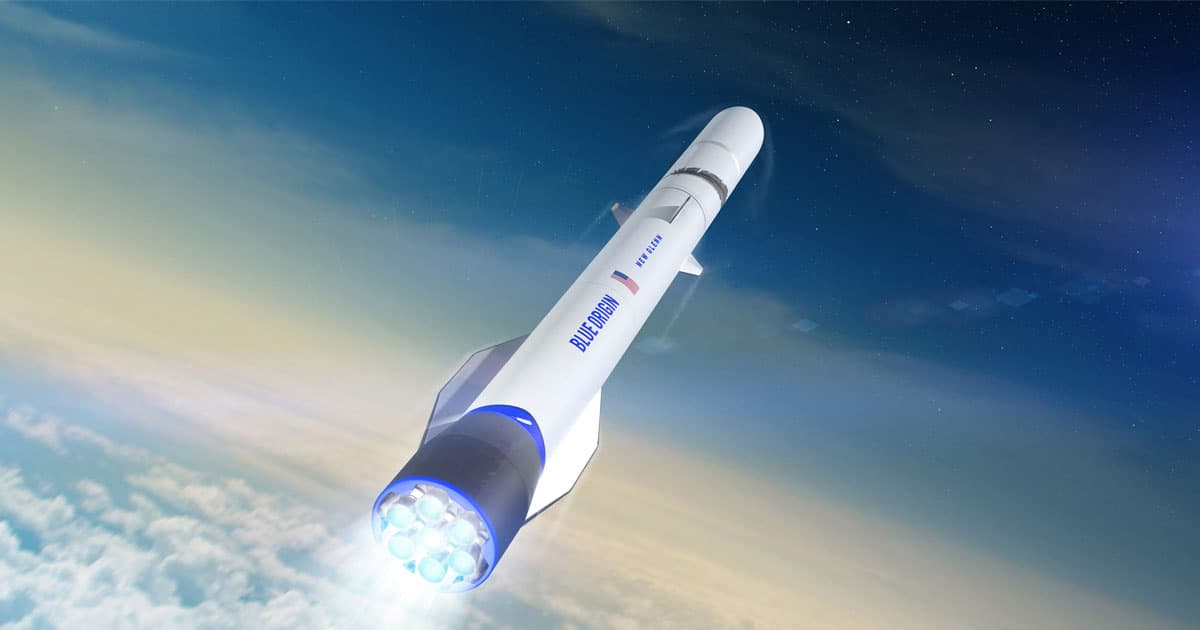 In a new animation, Amazon CEO Jeff Bezos' space agency Blue Origin showed off a new design for its heavy load "New Glenn" rocket. The animation shows the two stage rocket take off from a launch pad before separating a bullet-shaped payload fairing in space as the booster re-enters the atmosphere and lands on a ship.

Yes, that last part is similar to how SpaceX reuses its Falcon 9 boosters, down to the way legs (the Falcon 9 has four while the New Glenn will have six) splay out of the bottom of the booster to stabilize it during touchdown. While it's not exactly a new idea — even for Blue Origin — a previous New Glenn animation from 2017 showed a slightly different leg design that folded out of the sides of the booster, rather than swinging out.

Blue Origin's smaller suborbital rocket, the "New Shepard," has also made progress over the last few years. Its next test flight is slated for Jan. 23.  Rather than sending a massive payload into orbit, New Shepard's capsule will carry scientists and their equipment for experiments into suborbital space.

We have yet to hear from Blue Origin about an exact launch date of its New Glenn orbital rocket, let alone crewed test flights. The company has said it's aiming for a 2021 test flight from the Cape Canaveral Air Force Station.

Blue Origin has some catching up to do. SpaceX's Heavy Falcon completed its first test flight last February, becoming the most powerful rocket in operation.

Read This Next
Shot Well
Head of NASA Relieved to Hear Elon Musk Isn't REALLY Running SpaceX
Pale Blue Shat
William Shatner Explains Why His Trip to Space Was Horrible
Overview Effect
William Shatner Says His Space Trip Left Him With a Feeling of Terrible Grief
Makeover Scene
Space Tourist Says He's Thinking About Flying SpaceX Craft Up to Fix Hubble
Grain of Salt
There's a Huge Problem With Elon Musk's Promise to Bring Starlink to Iran
More on Off World
No More Hops, Mor...
Yesterday on the byte
Suggestion: NASA Should Make Its Mars Helicopter Do Some Gnarly Tricks From "Tony Hawk"
Exoplanet Dance
Tuesday on the byte
Scientist Releases Amazing Video of Exoplanets Orbiting Distant Star
Space Junk News
Tuesday on the byte
Two Large Chunks of Space Debris Just Almost Collided in an Epic Disaster
READ MORE STORIES ABOUT / Off World
Keep up.
Subscribe to our daily newsletter to keep in touch with the subjects shaping our future.
+Social+Newsletter
TopicsAbout UsContact Us
Copyright ©, Camden Media Inc All Rights Reserved. See our User Agreement, Privacy Policy and Data Use Policy. The material on this site may not be reproduced, distributed, transmitted, cached or otherwise used, except with prior written permission of Futurism. Articles may contain affiliate links which enable us to share in the revenue of any purchases made.
Fonts by Typekit and Monotype.