"After these deaths, there is no way in hell I am relying on Amazon to keep me safe." 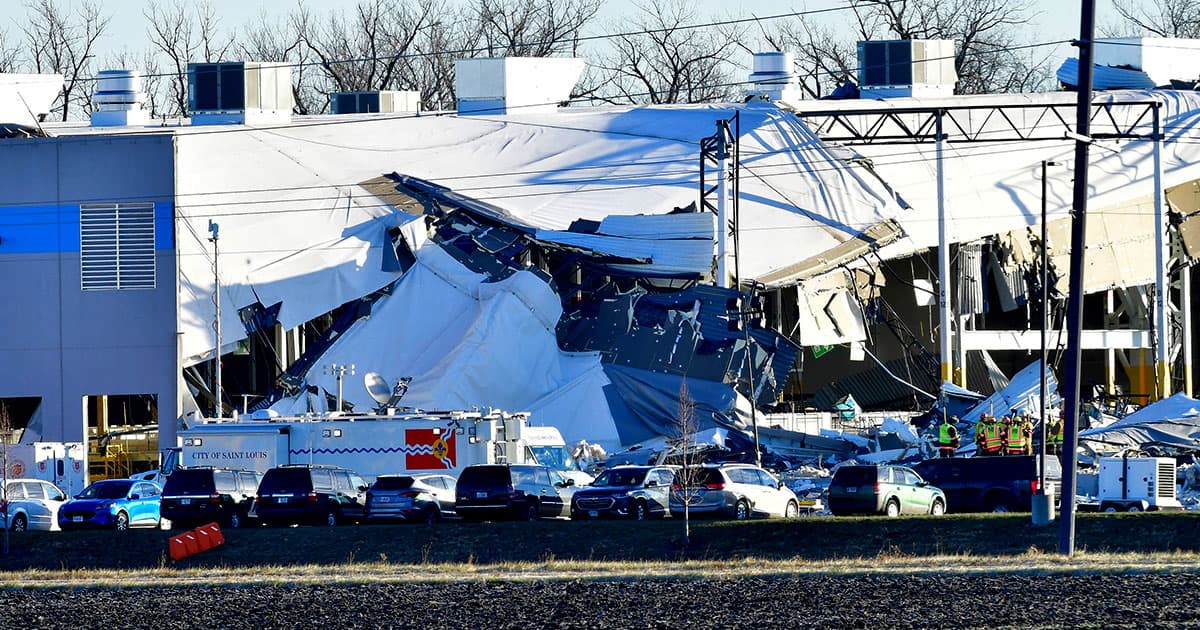 An Amazon warehouse collapsed in Edwardsville, Illinois on Friday night, killing six people during a series of deadly tornadoes.

Now, as recovery efforts are still underway, the tech giant is under fire for its controversial workplace cell phone ban — devices which many rely on to keep updated during emergencies, Bloomberg reports.

The policy, which Amazon has had in place for years, restricted employees from having their phones on them on warehouse floors. While the ban was rolled back during the height of the pandemic, it has since been reintroduced at company facilities. With the tragic deaths after the warehouse collapse, workers are now calling the policy into question.

"After these deaths, there is no way in hell I am relying on Amazon to keep me safe," one anonymous employee told Bloomberg. "If they institute the no cell phone policy, I am resigning."

Another Amazon worker at a warehouse in Indiana echoed the sentiment, saying that "I don’t trust them with my safety to be quite frank. If there’s severe weather on the way, I think I should be able to make my own decision about safety."

One employee said that the disaster will definitely spur more workers to keep their phones on them.

"Most employees that I’ve talked to don’t keep their phones on them for personal conversation throughout the day, it’s genuinely for situations like this," the worker told the magazine.

"Employees and drivers are allowed by policy to have their cell phones with them," the spokesperson said.

Asked whether that included the warehouse floor, she responded: "Yes."

That hazy rationale also isn’t likely going to be enough for many, including the workers’ rights advocacy group Warehouse Workers for Justice. The Illinois nonprofit released a statement on Saturday calling on lawmakers to investigate the company’s safety practices.

"Because of Amazon’s poor record of worker safety in the relentless pursuit of profit, we call on Illinois legislators to convene a hearing to ensure all Amazon facilities are places of safety for workers and that no family has to worry whether or not their loved ones will make it home from work after an extreme weather event," the statement read.

The optics were also not helped by company CEO Jeff Bezos, who posted a picture celebrating the return of a Blue Origin space tourism crew to Instagram a just hours after the warehouse collapse — a move that can only be described as Marie Antoinette-esque.

While he eventually posted a statement addressing the tragedy, it still came a day after the disaster. It's a bad look no matter how you cut it.

Bezos has come under fire in the past for what critics called exploitative labor practices at Amazon facilities. Now, with the tragedy at Edwardsville, his policies are sure to come under even closer scrutiny — and, hopefully, change for the better.

Read This Next
Company Town
Amazon Pays for High School Class About How to Be an Amazon Grunt
Deadly Delivery
Amazon Wouldn't Let Driver Stop Deliveries as Tornado Struck
SpaceX:1 Blue Origin: 0
Federal Judge Shoots Down Blue Origin's Lawsuit Against NASA
Cover Your Ears Bernie
IRS Leak Shows Elon Musk Paid $0 in Federal Income Tax in 2018
RIP
Amazon Says Sad Workers Can Shut Themselves in "Despair Closet"
More on Future Society
Primate Theft
Yesterday on the byte
It Was a Very Bad Weekend for Monkeys Being Stolen From Zoos, Apparently
Ring The Alarm
Yesterday on the byte
Whistleblower Claims Facebook Can Secretly Drain Your Phone's Battery on Purpose
I Silence Thee
Jan 28 on futurism
Leaked Messages Seem to Show Elon Musk Using Twitter to Punish His Enemies
READ MORE STORIES ABOUT / Future Society
Keep up.
Subscribe to our daily newsletter to keep in touch with the subjects shaping our future.
+Social+Newsletter
TopicsAbout UsContact Us
Copyright ©, Camden Media Inc All Rights Reserved. See our User Agreement, Privacy Policy and Data Use Policy. The material on this site may not be reproduced, distributed, transmitted, cached or otherwise used, except with prior written permission of Futurism. Articles may contain affiliate links which enable us to share in the revenue of any purchases made.
Fonts by Typekit and Monotype.