We'll need to be careful using AI in the search for ET. 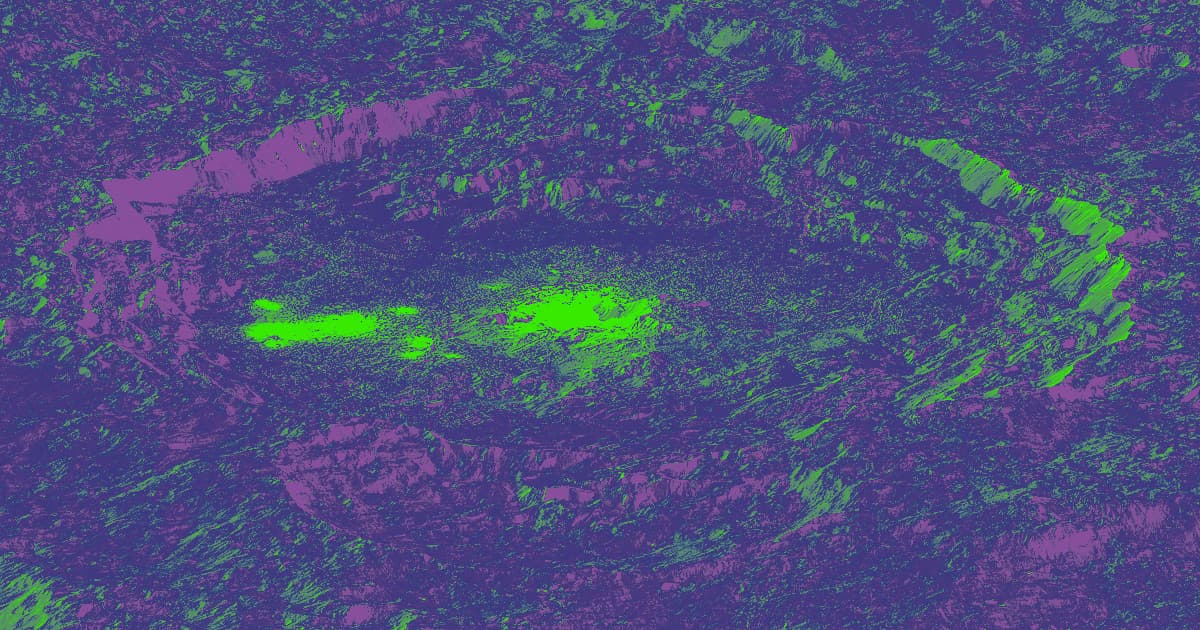 While some researchers search for biological signs of life beyond Earth, others are scouring the cosmos for technosignatures — evidence of the kind of technological activity we might expect from an advanced alien civilization.

This evidence could take a range of forms. It might be a series of radio signals, signs of pollution in an exoplanet's atmosphere, or even an engineered structure.

A new study suggests, however, that we might want to think twice about using artificial intelligence to help in our hunt for technosignatures — because it could trick us into thinking we see signs of aliens where none exist.

Here's an example of how it could go down. In 2015, NASA's Dawn spacecraft spotted several bright spots in the crater Occator on the dwarf planet Ceres. That led to some speculation that the spots could be signs of alien life, but they were later determined to be caused by salt deposits.

While looking at the Occator images, researchers from Spain's University of Cadiz noticed geometric patterns, which are another potential sign of an alien civilization. That inspired them to conduct a study to see whether an artificial vision system would identify the same potential technosignatures in planetary images as humans did.

"[W]e saw it as an opportunity to confront human intelligence with artificial intelligence in a cognitive task of visual perception," researcher Gabriel G. De la Torre said in a news release, "not just a routine task, but a challenging one with implications bearing on the search for extraterrestrial life (SETI), no longer based solely on radio waves."

At the start of the study, which was published in the journal Acta Astronautica, the team asked 163 volunteers, none of whom had any astronomy training, to look at images of Occator and tell them what they saw. They then had an AI that had been trained to identify squares and triangles in photos analyze the images as well.

"Both people and artificial intelligence detected a square structure in the images, but the AI also identified a triangle," De la Torre said, "and when the triangular option was shown to humans, the percentage of persons claiming to see it also increased significantly."

In reality, the triangle shape was likely just a mix of shadows and light and not anything alien, according to De la Torre.

But the fact that the study's volunteers could "see" the triangle after it was pointed out by the AI could mean that machines will do little more than convolute the search for technosignatures — by convincing us that we see signs of aliens where none exist.

READ MORE: AI could deceive us as much as the human eye does in the search for extraterrestrials [SINC]

Read This Next
Let Them Fight
Whatever You Think of BuzzFeed's AI Quizzes, They're Way Less Horrible Than What CNET Has Been Doing
Bot Wreck
Red Ventures Knew Its AI Lied and Plagiarized, Deployed It at CNET Anyway
Pleading the Fifth
Extremely Embarrassing Evidence Emerges Against CEO of “Robot Lawyer” Startup
Chinese Chatbots
Chinese Company Gearing Up to Release Powerful ChatGPT Competitor
Locker Room
Leaked Messages Show How CNET's Parent Company Really Sees AI-Generated Content
More on Artificial Intelligence
Bang
3:05 PM on the byte
Harvard Researcher Warns AI Arms Race Could Destroy Civilization
AIlex Jones
Yesterday on the byte
ChatGPT Is Freakishly Good at Spitting Out Misinformation on Purpose
Meow Meow
Yesterday on the byte
Amazing New CatGPT AI Answers as If It Were a Kitty Cat
READ MORE STORIES ABOUT / Artificial Intelligence
Keep up.
Subscribe to our daily newsletter to keep in touch with the subjects shaping our future.
+Social+Newsletter
TopicsAbout UsContact Us
Copyright ©, Camden Media Inc All Rights Reserved. See our User Agreement, Privacy Policy and Data Use Policy. The material on this site may not be reproduced, distributed, transmitted, cached or otherwise used, except with prior written permission of Futurism. Articles may contain affiliate links which enable us to share in the revenue of any purchases made.
Fonts by Typekit and Monotype.