There's even a video of the landing. 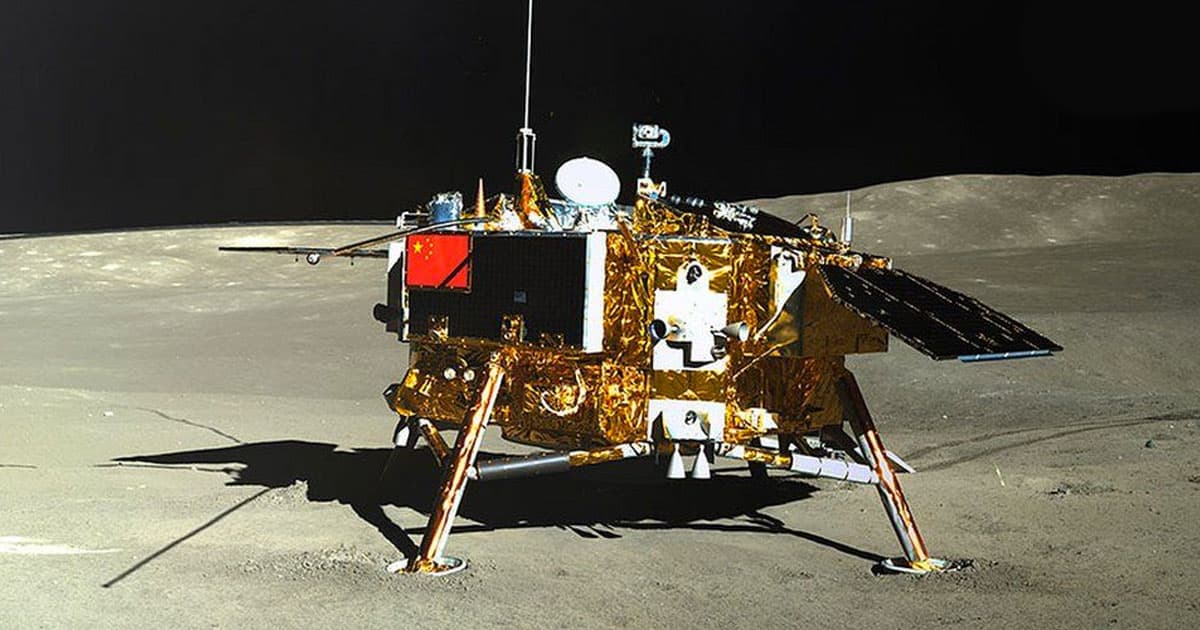 Chinese moon lander Chang'e-4 and its companion rover Yutu 2 just took photos of each other while basking in sunlight on the far side of the Moon, which faces away from the Earth.

After touching down just over a week ago, the lander has now sent back several new pictures, including a stunning 360 degree panorama of its surroundings. The Yutu 2 rover, and the tracks it left as it made its way across the lunar surface, can be seen in the bottom left.

The lander also sent back a video stitched together from more than 4,700 static images taken by the on-board camera. The video shows Chang'e-4 adjusting its trajectory right before landing on the lunar surface below.

All that information had to go through a specially deployed relay satellite, since the Moon itself blocks direct signals to Earth from its far side.

Exploring the Far Side

The Chang'e-4 launched on December 7 to explore the far side of the Moon and investigate how its mineral composition and structure compare to the much better-known near side. It’s also carrying a tiny biosphere containing a number of Earth-based species including potato plants and fruit flies.

China's Lunar and Deep Space Exploration organization claims the mission "was a complete success" according to an update on its website published today, as interpreted by Google Translate.

Now, the engineers working on the project are handing the reigns to the scientific exploration team, according to the update.

And we can't wait to find out what they'll be able to learn from studying the far side of the Moon in the upcoming months.

More on Chang'e-4: See China’s Lunar Rover Set Off Across the Far Side of the Moon

Read This Next
And He Scores
We Are Completely Puzzled by This Video of a Chinese Astronaut Playing Ping-Pong in Space
Moon Wrestling
The Head of NASA Is Scared Chinese Astronauts Will Seize Portions of the Moon
Monkey Business
China Plans to Send Monkeys to Space Station to Have Sex With Each Other
Next Time
NASA Cancels First Launch Attempt of Uber Expensive Moon Rocket
Back to the Moon
NASA: SpaceX Only Has to Prove It Can Land Astronauts on Moon, Not Bring Them Home Again
More on Off World
Grrrrrrrr
Yesterday on the byte
Internet Erupts as NASA Spots Cartoon Bear on Surface of Mars
Gl1tc4
Yesterday on the byte
NASA Says Another James Webb Instrument Has Suffered a Glitch
comet Spotting
Yesterday on the byte
Behold! Dazzling Green Comet Approaches
READ MORE STORIES ABOUT / Off World
Keep up.
Subscribe to our daily newsletter to keep in touch with the subjects shaping our future.
+Social+Newsletter
TopicsAbout UsContact Us
Copyright ©, Camden Media Inc All Rights Reserved. See our User Agreement, Privacy Policy and Data Use Policy. The material on this site may not be reproduced, distributed, transmitted, cached or otherwise used, except with prior written permission of Futurism. Articles may contain affiliate links which enable us to share in the revenue of any purchases made.
Fonts by Typekit and Monotype.